A boat trip – by taxi 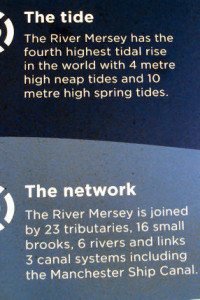 “As your September birthdays are special this year we are sending you on a cruise…”  Yes, the Cheshire Three were going to pay for a cruise (the Med? the Caribbean?) on the Mersey and the Manchester Ship Canal!  The rationale was clear: since the Cleddau crew (plus two) had gazed at the mighty Manchester Ship Canal from Weston Lock on the Weaver in April and in September crossed it by Manchester tram ride and glimpsed it from the Bridgewater Canal the time had come to cruise upon it!

Date and direction chosen, at 9am on Saturday the Captain and Boatwif were deposited by Cheshire Mum at Seacombe on the Wirral side of the River Mersey. The plan involved a six hour cruise up to Manchester, tram and train rides back to Macclesfield and then a walk uphill back to the day’s starting point. Back deck experience suggested the wearing of windproof layers of clothing so coat pockets were stuffed with warm hats and gloves. All set…

On Friday evening Techno Son-in-Law received a “tweet” on one of his gadgets, the Environment Agency investigating reports of low water on the Manchester Ship Canal. No matter, no further tweets overnight, no catastrophic news headlines.

There was intense conversation at the Mersey Ferries Ticket Office on Saturday morning, a Customer Services agent issuing apologies and “I’ve only just been told…”  Been told what? What? Gradually the story emerged: a sluice gate at Latchford Locks had been raised to release high water levels but now would not close.  Consequently the eastern end of the MSC was short of water and closed to navigation. Mersey Ferries was prepared to provide full refunds, or a rebooking on another date or to offer a shortened cruise with a return to Ellesmere Port. Consternation was widespread; a man in a grey suit was interrogated, a cold sweat breaking out on his upper lip. Why couldn’t the coaches designated to return passengers from Manchester to the embarkation point be repositioned to pick up those passengers intending to make Manchester their final destination? Time ticked on: whether to abort the trip, flee across the water to Liverpool and find a return route from there – or to stick with the amended cruise. Boatwif called the shots: stick with Plan A.

Down the ramp to MV Royal Daffodil the passengers trooped, onto a vessel bucking on the fast-flowing tide. There was wind driving up from the mouth of the river but across the water was Liverpool’s waterfront. Gradually sense was made of it: the twin towers of the Liver Building, the Mersey Tunnel air vents, Liverpool’s Anglican Cathedral and a glimpse of the Catholic Cathedral. Further downstream stands the largest warehouse in the world; upstream was moored a Stena Line ferry which covers the Liverpool-Belfast route. The trip boat got under way: ahead small sailing boats glistened in the sun and then the boat began to shadow the upstream starboard bank. Industry explained; refineries identified; housing periods described; geology outlined – the commentary was clear but constant, leaving little time to digest.

On the boat went and the Ship Canal entrance at Eastham reached. The wind had dropped, the bow deck was crowded as passengers gathered to view the boat going through a lock. The boat hovered – and hovered. A tanker was in the lock, dropping down to sea level. Slowly, oh so slowly, it emerged and Royal Daffodil slid into the wide lock in its place. None of the turbulence of ascent in a Grand Union lock. The boat rose imperceptibly, the top gates glided open – and Royal Daffodil and the Cleddau crew were cruising on the Manchester Ship Canal!

The canal is wide (of course, since at the time of its opening only four ships were too large to navigate it). Mainly on the southern bank are the industrial installations: there was the old Bowater dock, once used for shipping pulp from Canada and logs from Finland, now a coal wharf. Further on is Ellesmere Port, smart new residences canal side but the Boat Museum is behind, locks leading  up onto the Shropshire Union Canal from its dock. For mile after mile after mile the canal and the Mersey Estuary run parallel, the estuary only metres away on the other side of the embankment. Starlings, herons, waders swooped overhead; passengers scanned the marshy territory for interesting bird life. Then the canal curved round a left hand bend: on the right is Weston Lock, providing boat access from the Weaver Navigation. That huge boys’ own chemistry set  was there, on the other side of the Weaver while on the Stobart dock sat salt mountains and stacks of plastic packaged goods. On an island in the docks is an elegant church, now disused, once a mission church for narrow boat families and local workers. Another feature intrigued – an array of sluice gates which allows overspill canal water to drain into the estuary. The massive steel arch of the Runcorn Silver Jubilee Bridge hove into view – but the trip boat could go no further. Winding (turning) a 60 foot narrow boat is always interesting, often challenging. How this ferry boat’s captain worked to wind this boat in an unusual place, not helped one jot by the strong north-westerly wind. He did well, but contact between boat and dock side fenders was made!

And that was as close to Manchester as the ferry got: the passenger map detailed 26 points of interest on the Ship Canal, passengers glimpsing just the first!  None of the swing bridges, viaducts or the Barton Swing Aqueduct were to be seen. Bow now into wind the boat retraced the route as far as Ellesmere Port. Far away, it seemed, a smudge was moving – and slowly a tug towing a tanker approached, its crew shouting down from the much higher decks.

The afternoon wore on, a camaraderie developing between the Manchester hopefuls. Accompanied by a bridesmaid and a father, a Northampton couple were celebrating their 33rd wedding anniversary, cruising past the church they had married in, clearly visible on the Liverpool side. Owners of nb Dreamcatcher, currently moored in Liverpool’s Albert Dock, regaled with quiet pride the tale of their son, an Olympic torch-bearer in Suffolk. Then there was Sandra, from London, and her bird-watcher mother, great companions throughout the cruise – and in what followed.

Disembarkation came, along with an announcement from the bridge. All passengers to the waiting coaches to be returned to Seacombe, the four people who needed alternative arrangements to await the Captain.  Boatwif, the Cleddau Captain, Sandra and Heather were those four. Sincere apologies offered, further explanations: sluice gates opened at Latchford Locks to cope with excessive run-off after the storms from the Cheshire Plain, gates then trapped open, water level thus falling, in 41 years of the Captain’s experience such an event never before known. Recompense offered: refund of half the ticket price and the cost of a taxi from Ellesmere Port to Manchester.  Straightforward… except getting to a place where a taxi could be hailed required a climb over a railing-topped wall and a discreet slide into a hotel vestibule behind a wedding party posing for full group photographs…

A taxi was summonsed. Somehow, despite the driver’s lack of Manchester knowledge, after a fifty minute £60 ride, the foursome were disgorged at Salford Quays, at just about the time the luckless cruise should have berthed.

Sandra and Heather made for the Lowry, while Boatwif and the Captain sneaked into the BBC, there to come face to face (face to probe?) with a Dalek…

A brilliant day, a brilliant cruise – even though the second half was by taxi! (Must look up the Mersey Ferry 2013 timetable and try to do it again, but when the Ship Canal is full of water…)