A cruise in two (unequal) parts

Stoke Bruerne to Cosgrove: 7 miles, 8 locks, 1 aqueduct
Onwards, further south to Milton Keynes – not for the shopping, not for the concrete cows, not for a roundabout counting exercise, but to moor the boat for a few days. First to leave pretty Stoke Bruerne..

Just as Cleddau reached the top lock this morning a lady emerged from one of the cottages. “Are you Kathryn?” Boatwif ventured. “I read your blog.” And so it was – a good chat covering houses and moorings and boats and boaters (and even 2CVs) ensued over the next few minutes…
There was no lock sharing as Cleddau descended the flight of 7 locks, although there was plenty of upcoming boat traffic.

Stoke Bruerne is a hugely popular area and obviously great pride is taken in the local environment.  Efforts are made to persuade dog walkers to behave responsibly by this

Towards the lower end of the flight there are some side ponds, no longer in use as water saving reservoirs for the locks, but there is a positive invitation to investigate wildlife.

Attractive murals created by local children and students ten years ago come as a surprise feature beneath a bridge.

– a reminder of the shock of coming across sunken boats, trapped debris and flooded fields in the aftermath of the Easter 1998 floods, floods  that were so devastating in Northamptonshire.

Was it because it was Monday morning that the next few miles were so pleasant? There was no road traffic noise, no train service noise and little boat movement.  Birdsong accompanied the boat in its unhurried progress towards Cosgrove.  There are open views to the right and to the left, in the fields were closely shorn sheep, horses (one in a horse blanket) and cattle, 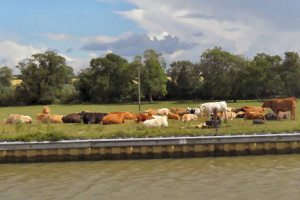 differing in colour from Cheshire’s black and whites – and there was also a large colony of Canada geese.
On the northern end of Cosgrove is Bridge 65, the exceptionally graceful Solomon’s Bridge, built in the 1790s in Gothic style.

There was an easy mooring just beyond it – a good place to be in the gathering thunderstorm. Blackening clouds above the church

– and rainwater on the windows!

Cosgrove Park is a huge static and touring caravan park – with a shop. “It has everything, everything!” emphasised another boater. ”Even tent pegs!” Not needing tent pegs but in search of some lemons and equipped with rucksack, umbrellas and waterproofs an expedition was mounted. Success!

The clouds were clearing, the sun began to feel steadier and so a move on from under the dark trees mooring was called for. One lock more, a few hundred yards further and a cruise over the Iron Trunk Aqueduct above the river Great Ouse

brought Cleddau to the very boundary of Milton Keynes. Close by is the newly restored aqueduct, modelled on the Pontcysyllte cast iron one. Below is the narrow horse tunnel

– and if you brave the cows there’s a grassy lock 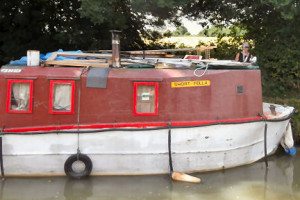