A Dawdle for a Dinner 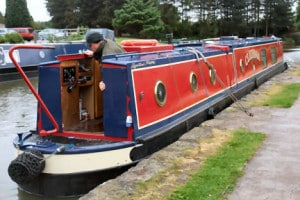 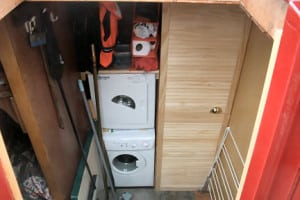 The list of jobs to be done was long: second airing cupboard door to be fitted; first airing cupboard door to be varnished; exact measurements of the window panes in the front doors to be taken; cupboards to be reorganised following acquisition of some storage boxes; an audit of stuff hastily stored under the dinette weeks ago to be made…  Our arrival just before coincided with the outbreak of a seriously heavy rain shower and although unloading was aided by a large umbrella overall it was a very wet business.

We had talked of eating at a local pub. “Oh no,” advised the Cheshire Daughter, “well, they do food there, but pubby food – and there are Dogs  there”.  Not entirely sure what that implied the Captain had a re-think. “Well there is the Miners’ Arms at Lyme View.”  Yes, we could negotiate the back lanes and maybe find it. But an easier, more direct route is via the towpath. A moment: go by boat! So, at Cleddau was untied from her moorings, winded (turned around, a precision manoeuvre assisted by calm conditions) and we sallied southbound towards our hoped-for dinner. Forty minutes later we were moored up at Adlington against a stretch of dry towpath, only a couple of minutes walk from a pub that is serious about serving food. The barman directed us to the top dining room (“Is that uphill?” wondered Boatwif). But the combination of the FA Cup Final and the Eurovision Song Contest seemed to have provided a run on the kitchen stores. A second choice starter was ordered; a different cut of steak had to be chosen but the food, once ordered, was swiftly delivered and in plentiful quantity.

A quiet night was spent opposite Lyme View Marina. As day dawned so did the realisation that boat work really did need to be done! Cleddau was turned and we headed northwards for all of half an hour. Behind us a heron screeched. From distant fields horses neighed (“Horse-fields,” snorts Techno Son-in-Law, who has Views on land usage in these parts), and as we tied up at the Trading Post to refill the water tank a chorus of Canada geese greeted us. A good chat was had over mugs of tea with a fellow boater while watching the hosepipe. Watering completed Cleddau was steered across the canal to her pontoon at the moorings.  There were jobs to be done. The rain drizzled – but we were glad we’d had a little dawdle along the canal, after all, isn’t that what boating is all about?

Time for a footnote (or two). The north/south divide is very apparent up here, for fashionistas. Down south T-shirts and sandals abound, in females are trudging around in denim jeans, high boots and faux fur trimmed jackets… maybe the lack of warmth and amount of moisture has something to do with it…?

Green-minded Techno Son-in-Law has reported a recycling triumph. The cracked and rusty Morso solid fuel stove, late of nb Cleddau, more recently in residence in his garage, is to star at the Cheshire County Show, as a prop in a wood shed as part of Cheshire East’s display… Now wasn’t there a recent question on Radio 4’s Gardeners’ Question Time about keeping Dream Sheds cosy…?