A day in three parts 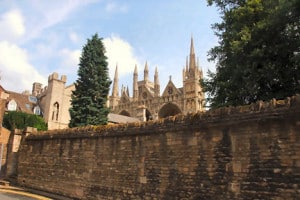 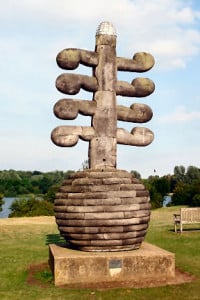 Sunday 15th August: Peterborough to Ferry Meadows, 3.5 miles, 1 lock
Our Captain’s preference on Cleddau cruises has always been for Boating Days or for Visiting Days, never the two coinciding. But a resolution has been made to allow for greater flexibility on our return route, hence our day in three parts…
Part 1: Morning: Domestic: a trip upstream to the large supermarket by the river, shopping, some tidying and carpet sweeping, watering, disposing of rubbish, attention to the sanitary arrangements (enough said!)
Part 2: Late Morning: Sight-seeing: a walk past the Key Theatre and the Lido to the Norman Cathedral; city centre cafe for lunch
Part 3: Mid Afternoon:Boating: upstream to Ferry Meadows.
To expand a little on Part 2: I had been aware of Peterborough in the news recently: crisis over reception class places, huge influx of foreign workers  – and indeed when we passed through Peterborough in late June languages other than English were all around us on the river path and in the supermarket. Then in St Ives earlier in the week I overheard a conversation about gang masters, workers “hot-bedding”, encampments and even a violent crime. None of this sprung to mind on our stroll through the city centre, apart from the number of young families. On the riverside paths and in the parks families abound, walking, fishing, cycling. But the Cathedral was our destination, open to visitors after 12 noon. The West Front is hugely impressive and we gathered Lincoln’s Front was its inspiration. A good exhibition about the building’s history and construction helped our exploration. It’s very light inside (lots of clear windows and light stonework). One area of unexpected interest is given over to the life of Katherine of Aragon, first wife of Henry VIII.  Her tomb is nearby, and in an annual service each January it is decorated with flowers and pomegranates. Visit and lunch over we returned to the riverside, climbed once again into the grubbier boating garb and cast off.
The boating: at Orton Lock I clambered onto the landing stage and through a fishing group and their impressive array of rods, nets and nasty looking stuff in buckets to reach the lock. The guillotine gate was up so the boat could be moved straight into the chamber. On the weir canoeists were hurling themselves through white water and slalom gates. From the bridge above the lock a good thirty walkers and cyclists watched our first “going up” Nene lock. It involved: securing boat with rope, closing guillotine gate, winding water in from top end, going to far side to open (and then close) far top gate, returning to first side to close paddle (gate having been managed by man and little boy) and then finally returning to guillotine gate to release water from lock, raise gate to maximum, lock up electric switches box – and get back on the boat.  And that will have to be repeated 36 more times in order to reach Northampton. A further complication causing even more muscle fatigue is that six of the locks require wheel-winding as opposed to electrical operation of the guillotine gate.
So we proceeded on along the river, past boat clubs and yacht clubs, rowing fours, rowing eights, even what looks like a stranded medieval boat,  until we came to a sharp left cut in the bank, a channel leading to Ferry Meadows, now a country park, containing three lakes, once sand and gravel extraction pits. We found ourselves in the middle of a wide lake, heading to the barely discernible moorings in the distance. We’re moored to a floating pontoon, opposite a tree-covered island, being serenaded by coots and geese, while the swans are doing a co-ordinated bottoms up salute!
Perhaps readers would like to research the origin of the last picture: a clue:  Sisyphus   I came across it during a walk round the lakes.