Conditions on Thursday were grey

– then wet, very wet… The sky was a tiny bit leaky at Bollington (look, those floats are marking the site of the leak earlier this summer

– and look, there is development of some kind going on just before Bridge 27).

– and some new friends too.

Onwards for another five miles. The wet afternoon and wet overnight stop at Lyme Green was offset the following morning by fine views back over Cheshire hill country…

Friday: this was a day with a mission – to reach and descend the 12 Bosley Locks,

to moor at the bottom and to report for duty.  Within minutes of Cleddau being tied up below the Cloud’s magnificent bulk along came Chouette and her crew.  Here were Patrick and Angela Marks

(they of the 2014 Wash Crossing ) here in their capacity as HALOUS organisers for The Macclesfield Canal Society .

So what is HALOUS? It’s the annual two day Canal Society event during which the Bosley Locks are manned by members as a means of raising awareness of the Society’s work and of raising funds.

Patrick (Event Marshal) had prepared briefing notes, allocated locks (Locks 9 and 10 for the Cleddaus) and issued radio handsets to lock keepers who did not have them… “A 9am start to erect the gazebo at Lock 5,” he said. 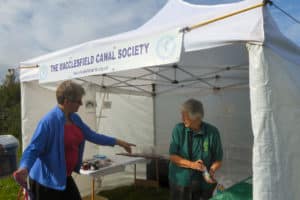 On Friday evening the opportunity for a towpath dinner

with the Cloud back lit by the setting sun

seemed to be advance payment for the hard toil that lay ahead!

Any fool can survive uncomfortably, so the Captain was taught in another life… When your workplace for up to eight hours is going to be half a mile away up a hill you need to be thoroughly prepared.  Early on Saturday morning a day’s survival items were assembled: up the hill were transported windlasses (tools of the trade)

What a privileged work place Lock 9 proved to be. Upcoming boaters were friendly, cheerful and glad of any help they could get.

The folk from Gem, one suffering an arm injury, both grinned widely.  “It’s Christmas,” she said, as the paddles were being raised to fill the lock. “I feel like royalty, it’s all being done for me,” pronounced the helmsman, as the top gates were swung open for him.

It takes about ten minutes for a boat to rise or to go down in a Bosley lock; there is work to be done but still there can be precious moments of conversation between lock keeper and crews. Recent and future destinations, boating anecdotes, several celebrations (one being two “boys” and their sixtieth birthday treat), a trail boat from the Mon and Brec, a moment of unintended comedy, two very moving tales…

And then, when it was quiet, how quiet it truly was. No boats moving in the lock above or below, just the occasional sound of the mainline Manchester – Euston train rattling across a distant viaduct .There were the various sounds of water, water spilling through the crack between top gates when the lock was full, water tumbling into the side pond from a lock above, water trickling down through the bottom gates. And the views! Locals understand only too well that there’s always a lot of weather on the Macclesfield Canal. Shifting cloud patterns,

a hill top changing its garb throughout the day,

the graceful sweep of the bridge before Lock 8.

The sheep in a field just across the fence from the towpath proved gentle companions.

As the two days wore on the lock keepers melded as a team. Invisible from view they were voices over the radio waves.

“Lock 12 here:upcoming boat about to enter the bottom lock…”

Sometimes traffic was steady and sometimes there were flurries with boats needing to cross in the shortest of pounds between Locks 9 and 8,

or lurk in the pound below,

waiting for an upcoming boat to leave the lock chamber at 10.

Then, at about 2pm on Sunday, a familiar face, well two really, gazed across the lock from the opposite side. There was the Tentatrice First Mate – accompanied by Monty, the Boat Dog. Their gentle meanderings had brought them along the Macc to Bosley, for a reunion with Cleddau – and a reunion with Chouette.

If the tally was right Sunday saw 21 boat movements, more than the dozen on Saturday. Last assisted boat down was Chouette.

“S’ppose we ought to help you since it was you who organised us,” chirped one faceless voice on the radio.

Later there was cork popping on Cleddau as the 2014 Wash Crossers gathered to relax after some energetic days, to exchange news and views – and to bid one particular Tentatrice crew member a very happy birthday.

On Monday the Macc Society boats dispersed from Bosley

– and Cleddau and Tentatrice set off, first night at the Ramsdell Hall Railings,

Next time:  the Board word – and why would you unmoor a boat just before sunset…