A long way to go just for a walk…

It was an offhand remark in the winter – one of those “I wouldn’t mind going to…” thoughts that get spoken aloud – that sparked a plan and became a project.  It was to be Destination Sharpness to view the Purton hulks for the 2017 Cleddau cruise.

So, on Tuesday there was just the matter of getting down the River Severn from Tewkesbury to Gloucester before the rain properly started…

A chat and farewell to the What a Lark crew

– and a manoeuvre into  Tewkesbury’s Avon Lock to drop down onto the Severn, a seriously big river. 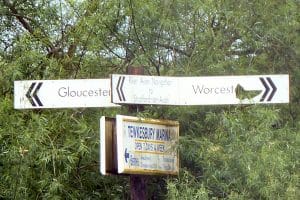 There is no commercial traffic these days – and certainly there was not much else on the move, just one upcoming narrowboat crossed at Haw Bridge

so there wasn’t even sight of the steerer.

These structures are prepared for high water 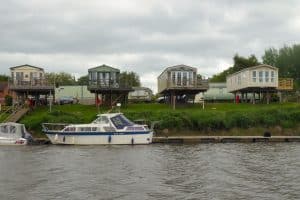 and just look at the size of the debris caught midstream by a signpost.

Down the river, in bumpy and blustery conditions… 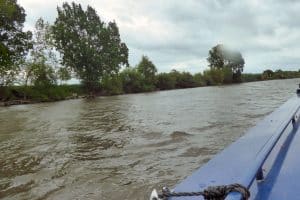 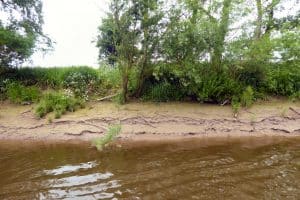 – would the threatened rain raise the levels much?

Close to the city there are the three bridges,

and then the deep lock which raises boats 18 feet 6 inches up into Gloucester Dock. 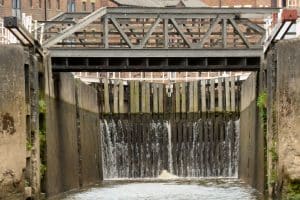 Gloucester Docks never fail to impress, by day, by night,

in the sheeting rain

– and eventually, in sunlight.

Onward on Thursday, through the Llanthony Lift Bridge, 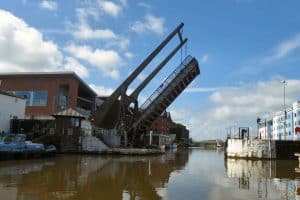 onwards down the Gloucester and Sharpness Canal. 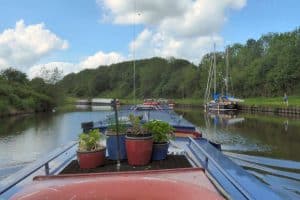 You know it’s going to be wide, but even so its dimensions (width 86 feet, depth 18 feet) are a little different from those of the narrow Macclesfield Canal! The G and S was designed as a ship canal and when constructed (it opened in 1827) it was the widest and deepest in the world. There are narrow boats 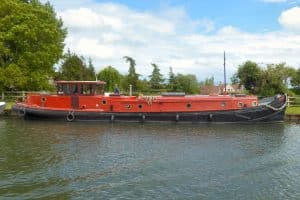 down here these days, but also some rather different vessels… 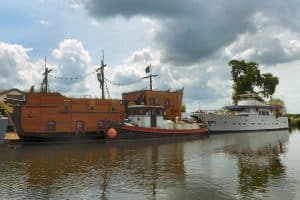 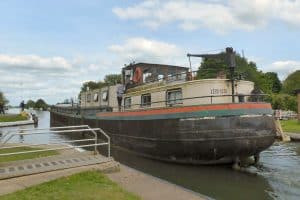 Spectators down here next week might catch a glimpse of some Tall Ships since there’s a festival in Gloucester Docks over the Spring Bank Holiday.

The Sharpness Canal is remembered most though for its swing bridges (operated by bridge keepers) and its charming (but no longer used) bridge keeper houses.

Eight miles along the canal there was an overnight pause at Saul Junction – and time to liaise again with the fellow 2014 Wash crossers (Patrick and Angela), last seen in August at the Bosley Locks HALOUS. Thanks very much for the edibles, folk! 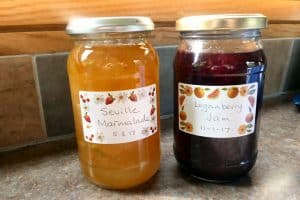 Saul Junction is a hive of activity. It’s a canal “crossroads”, 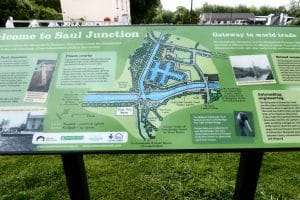 a busy café and (more in a later post) good boater facilities.

But onward on Friday – the last eight miles to Destination Sharpness. It’s a familiar route for Cleddau (first visit was over twenty years ago) but nonetheless one that thrills.There’s deep water … wide water. At Frampton-on-Severn comes a glimpse of the parallel silvery ribbon, 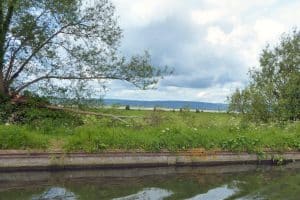 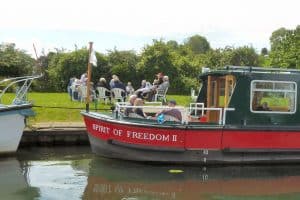 must pass through the commercial dock).

Moored up, just the long grey stone wall separates the canal from the estuary.

Only feet away is a beached hulk, one of over eighty part buried in the reeds and silt…The end of the canal is a strange and lonely place. There is soft swishing in the breeze of the reeds, the call of birds over the mudflats, the sound of the wind whining through the Old Dock railings.

the incoming tide laps over the mud banks. 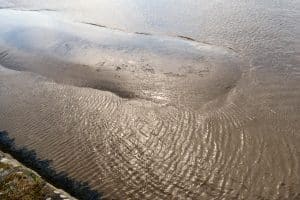 The water, rippled in some places, flat in others, 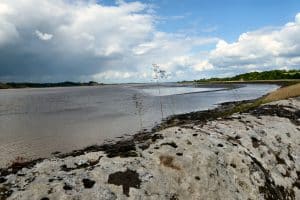 hides the channels and hazards beneath the surface.

The sign beside the Severn Railway Bridge is a stark reminder of disaster. Five men lost their lives in heavy fog in October 1960 when two tanker vessels missed the Sharpness lock, collided and struck the Severn Railway Bridge. The mix of cargoes (heavy oil and petrol), combined with a ruptured gas main carried by the bridge and a cut main electricity cable led to a catastrophic explosion.

Still visible today at low tide are the remains of one of the tankers involved in the disaster.

Close by are small memorial markers. 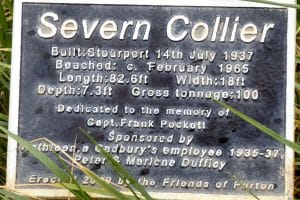 It is along this stretch of the Severn bank  at Purton that many ships’ hulks have been beached and left to act as reinforcement between the canal and river.

Over many years silt and grass have been washed into the hulks, stabilising the bank and protecting the canal. Enormous efforts have been made to identify the origin of each hulk. The plaques outline each ship’s name and when built. Many are dedicated to the memory of particular crew members. These skeletal shapes, their floating function long past, but a new purpose found, are a moving tribute to the boat builders and seamen -and to the historical researchers who have detailed their past.

To view this isolated graveyard involved a walk through reeds,

on flattened mud paths, at sea level, just yards from the river. 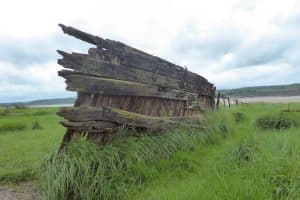 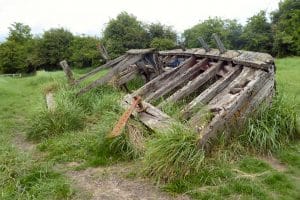 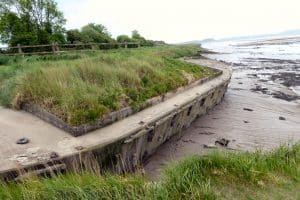 And yes, it was well worth the 281 miles and 518 feet change in elevation to view these ghostly forms.

Post walk Cleddau and crew headed north on Saturday afternoon, back to Saul Junction, midpoint on the G and S Canal. There was urgent need to be close to a tap – more on that next time…

Monkton Moments*: 9 (Recent places mentioned – Crundale, Brawdy, Haverfordwest, Fishguard,  and Angle. ” Lived in Angle between 2005 and 2009,” said a young lady. “Angle beach is the very best place in the world…”)