A walk up a rare Incline 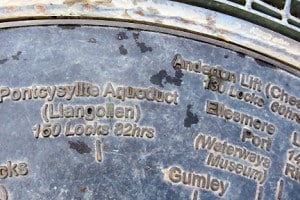 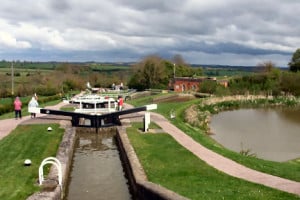 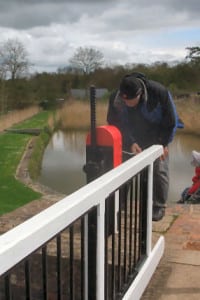 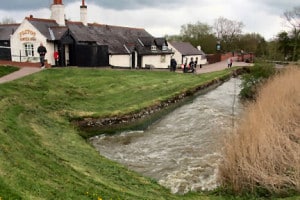 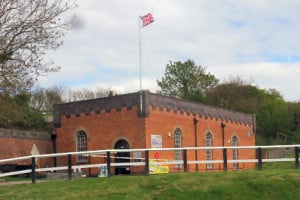 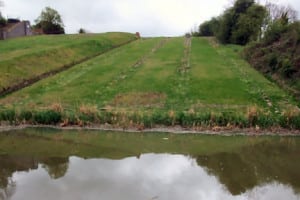 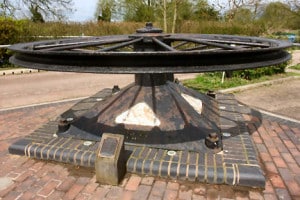 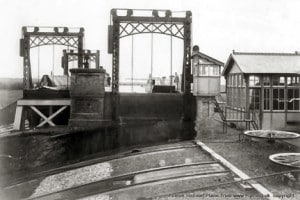 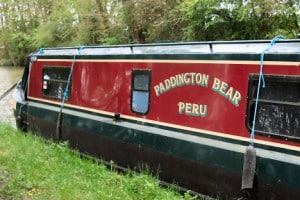 Cleddau is moored far from home but on Saturday Boatwif and the Captain were craving boats and a breezy walk. Why not Foxton Locks then, was the thought.  Years before becoming boat owners there had been an expedition into rural Leicestershire in pursuit of a country walk – and the spectacle of dinky locks, side ponds and an odd little museum had proved a magical surprise. Time and again we have returned – to walk, to gongoozle and twice to cruise on Cleddau, on a through route to , and .

An accident on the M1 caused a long cross-country diversion, through a gently rolling landscape of acid yellow fields, stone-built villages and graceful church spires. Once a coach was off-loading passengers, the ladies clutching hands to their heads to retain wedding hats while taking dainty steps around the puddles towards the church. Black clouds rolled overhead, periodically leaking short and sharp showers. Wrapped up well against the chill wind we strolled the few hundred yards from the car park to the top of the locks. Now some informative notices have been placed beside the towpath – but at Foxton when there is boat action one’s attention is always drawn to the locks.

One boat up; another up; another up; one down; another down; two more up… The locks, ten in all, are arranged in two groups of five “staircase locks”, where each lock chamber opens directly into the next one. Watching boats make their way up or down the flight becomes compulsive viewing. Questions are asked of the steerers while eyes stalk the windlass-wielders: will they get the paddles in the right order…

White before red and you’ll wish you were dead!”

The ground paddles are unusually placed, at each lock one near the top gates and one halfway along the lock side. To distinguish them those which fill the locks from the side ponds are painted red and those which empty a lock are painted white. The side ponds act as reservoirs besides the locks: about half the water from emptied locks goes in and half the water needed for filling locks is drawn out, so each lock cycle uses half only of a lockful of water.

And as gongoozlers make their way down the pristine towpath (observing perhaps, as we did yesterday, the lock-keeper pushing his lawnmower, windlass tucked into his belt) their eyes will take in the side ponds and the squat brick building on the other side of the flight.

At the bottom of the hill changes were remarked upon: a boat shed now another food-serving pub, a BW key operated footbridge across the canal and a large car park catering for pub visitors and customers for the various trip boats. But round the corner, on the short canal arm, lies another change. Here work parties have cleared the scrub and tree growth on the steep slope where for eleven years (1900 –1911) the Foxton Inclined Plane hauled boats up and down the hillside in water-filled caissons. We walked up the steep slope where once two huge metal tanks, each carrying  two narrow boats, would move the boats between the two canal levels, thus by-passing the queues at the lock flight. At the top of the slope brick foundations and some metal rail indicate the line the caissons took and a huge metal barge is positioned to show where the boats would rejoin the canal’s upper level. But how did it all work?

The squat brick building (now the Inclined Plane Museum) had been the boiler house which provided the 25 horse power (18.6kW) of energy for a steam driven winch to raise and lower the caissons. On top of the building’s flat roof used to be a superstructure which contained the winding gear and the operator’s viewing position. Yet another marvellous engineering design created by the late Victorians.

The Foxton Incline Boat Lift is the only Lift Incline to have been built in the although others exist in continental . This is a wonderfully inspirational place to visit, whether as a boater or as a person curious about our waterway past.  Since 2005 Heritage Lottery money has helped with the preservation and interpretation of the site.  In the Museum a figure of £12 million and a time scale of “after the recession and after the Olympics” were mentioned if the target to restore the Lift is ever to be achieved…

A pub lunch and then a (dry) flat stroll beside the canal took us some distance towards Market Harborough. The canal is a section of the Grand Union Leicester Line: there may be movement restrictions due to the drought further along but boats were on the move – day boats, Canaltime hire boats and locally moored boaters out for a holiday weekend.  Then one final surprise: in this quintessentially quiet rolling English countryside lies an unexpected foreign visitor, all the way from had come nb Paddington Bear! And, just for the record, had Cleddau been descending this boat lift she and her crew could have discovered from the viewpoint that they were only 130 locks and 60 hours from their April destination, the Anderton Boat Lift…