A waterway in the making 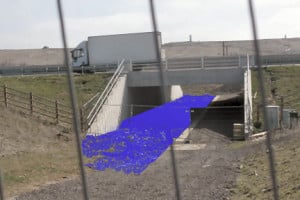 In October 1811 a group of businessmen met in to discuss the prospect of a canal connecting the (then) which runs through Buckinghamshire and the River Great Ouse at .  John Rennie, the famous canal engineer, was commissioned to compile a suitable route.  He found two, prepared presumed costs, although in due course his preferred route was used to develop the to Bletchley Railway.

Roll forward two hundred years and talk of boating between Bedford and the Grand Union is very much back in the public arena. The Bedford & Milton Keynes Waterway grew out of an idea in 1994 – and now the designated route through two counties is protected, and bit by bit plans are being laid to bring the vision to reality.

On Sunday the Captain, Boatwif and a local canal-minded friend joined about fifty other curious folk for a guided walk, the purpose to trace the intended canal route as it skirts close to Wootton, a village south west of . The group set off from the Black Horse pub at Potters Cross and made its way behind the village for about half a mile to the first of several stopping points where route description was offered and publicity photographs taken. The hike then took the walkers over the (for pedestrians over the new A421 dual carriageway) from where a good view of the canal route could be seen. Next a short walk westwards alongside the old A421 (now local) road back towards the village brought the group to a viewpoint behind the Persimmon housing development. Further along the walkers crossed into Berry Wood, a recent plantation, there to be shown the waterway underpass* constructed under the A421.

What new information did walkers glean about the project?

·        The area being prepared as a light industry park on the edge of Wootton will be built with connected lakes, eventually forming between one and two kilometres of waterway.

·        Developers, Persimmon in Wootton, and another developer building behind , will be providing funds towards the Route 51 cycle path which will also serve as the towpath.

·        About a dozen locks are envisaged to take the waterway up to the level and down to the river at Kempston.

·        The underpass will bring the waterway from the eastern end of .

·        Whether the route through the Forest Centre territory will use the lake (shared by sailors and water-skiers) or a cut alongside has yet to be decided.

·        A B&MK Waterway trip boat is planned; it will run on the Great Ouse from with a passenger capacity of about 60. A contract for building it should be signed shortly and it is hoped the boat will be in service from Spring 2013.

Informing the public and B&MK Trust members of the latest developments is important: the next Talks Evening will be held between at  on Tuesday April 24th.

In the heart of Berry Wood, beside a dipping pond, the guided walk ended. Shorter distance participants headed back to a Black Horse lunch while sturdier types continued westwards towards Wootton Green, past a garden harbouring several Shetland ponies, along a lane, through a horse-occupied field, past the WI Centenary Copse, towards the church and the village centre.

It might be twenty five years before we can float past Wootton in a boat: family members and relief crews prepare to winch us on board… But what’s really important is that the vision to create the Bedford and Milton Keynes Waterway is kept alive and the project supported in every way possible . To find out more go to: Bedford Milton Keynes Waterway Trust .