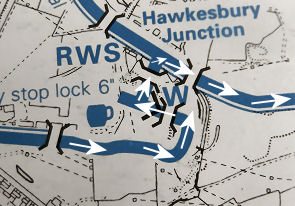 sees the end (or the beginning) of the North Oxford and the junction with the Coventry Canal. The distinctive building visible from some distance is a disused engine house where water once was pumped up on to the canal from a well.  All was quiet at the popular Greyhound Inn, tucked in the basin opposite the white bridge. There is a stop lock which lowers a boat about six inches down onto the Coventry level and then the canal’s course involves a double right hand turn.

Last time Cleddauwas here the first turn was executed perfectly, the second catastrophically. True there had been a very strong wind blowing but the memory of clearing up the debris inside the cabin remains…
“Would you like to do the turn this time?” the Captain asked as Cleddausat in the stop lock. There was no wild wind or lashing rain – so yes. It was a first (and maybe a last) attempt at navigating around Hawkesbury Junction.
It was going well, the first turn completed safely – then a slight hitch. The stern was too far left and the rudder trapped on an underwater obstruction. From the bank the Captain shoved the stern free, the boat was put into reverse then a better line taken through the bridge hole. Success!

No crashing, banging or spillage!
The Coventry Canal weaves past Bedworth (once a mining area). Here a one-time pub was undergoing a serious makeover.

As ever Charity Dock provoked a gasp and a giggle: there’s a clutter of boats and scrap articles around this boatyard but on a strip of grass is an array of whacky mannequins.

Just why was one flat on his back with his legs in the air?!  As for Rosie and Jim, there are versions of them pegged out on a washing line to dry.
On past Bedworth to Marston Junction, the start of the lock free Ashby Canal.

Allotments indicate the start of Nuneaton. There’s little sense of the town although a fair few of the houses have flower-filled gardens.

There is graffiti under the bridges but the canal water seems to have less rubbish bobbing in it than previously. New houses have gone up recently and then the countryside is reached again. There are glimpses of what must have been slag heaps and quarry faces

but nature swiftly reclaims her land. A telegraph pole is a survivor from the past, though no wires are attached to its arms now.

The canal continues past Hartshill Yard, now looking a little more tired than in the past. Why is this sign here?

Then on through a gentle pastoral landscape until arrival at Atherstone. Here 11 locks descend over about a mile and a half and here is a popular place for Volunteer Lock Keepers. There was one on duty at Top Lock, two more further down – plus a lurking local who likes to push gates and lower paddles.
After five locks a mooring was found, convenient to explore Atherstone. This ancient market town was built on the Roman Watling Street.

Until the late twentieth century (according to a local information board) its traditional industries were mining and felt hat making. There is a long street (well-stocked with pharmacies) and a market place with some elegant buildings.

The church has an unusual octagonal tower

and a plaque outside commemorates a royal visit.

There are pretty properties but like many towns it’s struggling in the current climate.
Tomorrow: planning to complete the Atherstone Locks and continue towards Alvecote…