All Washed up at Saul

Thursday, 18th June. What timing! Two hours further along the canal from Gloucester is Saul Junction

which itself is about midway

between the great inland docks of Gloucester and the exit point to the sea at Sharpness. Here Cleddau and Tentatrice needed to fill the fuel tanks and wait for boat servicing due on Friday.

Right on cue at Saul, as the boats were manoeuvring to tie up alongside each other, there was a hail from an approaching Willow Trust trip boat.

First though, some details about The Gloucester and Sharpness Ship Canal: it’s wide, usually 70 feet (as compared to the 26 feet width of the broad Grand Union and the 16 feet of the narrow Macclesfield Canal) and it’s deep 18 feet (compared to the 5½ feet of the Grand Union, and the 3½ feet of the Macclesfield Canal). There are no locks but there are 18 swing bridges, all operated by bridge keepers between the hours of 0800 and 1900. Narrow boats can squeeze under 5 of the 18 but at the rest narrow boats have to lurk and wait for an opened bridge and a green light.

Back then to events at Saul Junction: Patrick and Angela, although stalwarts of the Macclesfield Canal in Cheshire, live locally in Gloucestershire. “Will you be in Gloucester on Thursday 18th?” had been the email.

“Sorry, no, Saul Junction, preparing for the Sharpness trip,” was the reply.

By timely coincidence Patrick and Angela were doing voluntary crew duty on a Willow Trust boat that day. Duty completed they were back on board Cleddau– and for the first time since Newark last year all members of the July 2014 Cleddau, Tentatrice and Chouette Wash flotilla were reunited.

Before a pub meal (at the appropriately named Ship Inn)

Patrick led the way on a local walk

There were locks recognisable though not in use on the western end of the  Stroudwater Canal.

There was the  River Frome,

an unusual stile near Whitminster Church

and faces in gravestones.

On Friday morning the boat engines were serviced

and the fuel polished. Fuel polishing involves passing the engine diesel through different grades of filters to screen out impurities and debris from the fuel tank.

and here’s the muck…

After 24 hours moored at Saul behind Dame Shirley

there was a 4 mile move further on to Patch Bridge – and first glimpses of the serene River Severn. 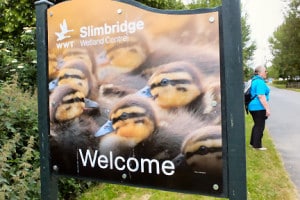 Visitors can wander over the huge site, passing ponds and lagoons which are home to hundreds of different species of ducks (here the pretty shelduck),

and swans (these fluffy feathered black swans are natives of Australia).

Onwards on Sunday, the last four miles to Sharpness. Midday there was water in the estuary but by late afternoon the ebbing tide revealed golden sandbanks and dark mudflats.

The wind breathed through the grasses and across on the other side a train ran past on the Gloucester to Lydney line.

It’s been 161 watery miles from Poynton to get here. This isn’t the first Cleddau cruise along the pretty Sharpness Canal and the glorious views across the Severn Estuary are achingly familiar.

Yet it is the human accent that tells you that these are foreign parts: tune in and you sense a slower vocal delivery and a West Country burr.

Tuesday is to be Severn Day.

As for the puzzle photo in the last post: ever touched a spire before? This structure is the top of the spire of the fifteenth century St John’s Church in Gloucester, the church demolished in 1732.