An end to things

Cruising since Braunston Summit has had a sense of finality about it.

This (Braunston Tunnel on Saturday morning)

was to be the last proper tunnel of the year. 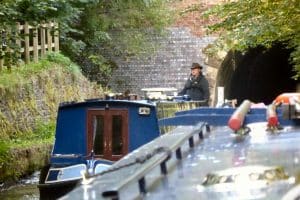 The tunnel light checked, the cabin lights turned on, the flood light was mounted on the engine hatch – and yes, the bow was struck by an oncoming Napton hire boat… It’s a tunnel wide enough for a broad beam boat but narrowboats can use it cruising in opposite directions. 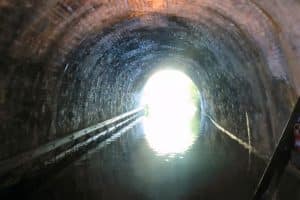 From the tunnel the canal extends a further half mile through a cutting to the six lock descent to Braunston. These six wide locks were to be the last ones this year shared with Tentatrice and crew… 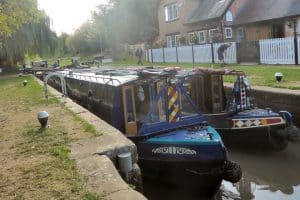 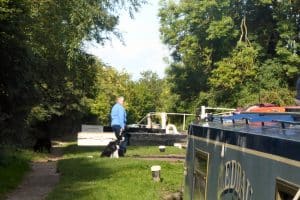 To secure a mooring place anywhere in Braunston was the aim – but not beyond Braunston Turn where the boats would need to go their separate ways…  Down the locks the boats proceeded. Above the third lock a raft of 7 flag bedecked boats was found, the occasion a boat gathering for ‘the wedding of Fern and Mark…’

In a lucky break below the fourth lock down two spaces had just been vacated. With The Admiral Nelson pub so close by this might be a fine place for a final dinner together, maybe… (With no free tables available for Saturday night it became a final lunch instead – and very good too it was!)

Braunston has long been regarded as the historic hub of the Midlands canals. 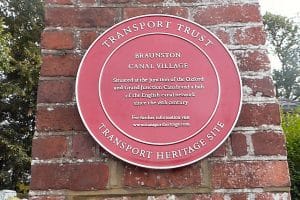 Here the Grand Union from the south heads west and then north to Leamington Spa, Warwick and Birmingham.  From Napton Junction 5 miles to the west comes the Oxford Canal linking Oxford and the route to Coventry via Braunston.

The many canal side buildings exude charm and history (a date detected in the pumping station chimney). 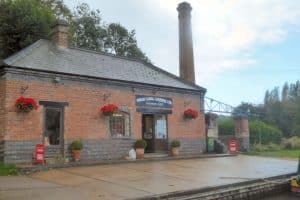 This oddly shaped house has a suitable name 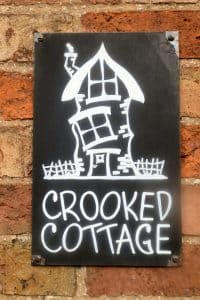 The village of Braunston is on a ridge above the canal and though it too has charm there is nothing in the village architecture that links it to the canal. A walk in drizzly conditions captured the hill top All Saints’ Church (often known as “The Cathedral of the Canals” with its famous crocketed spire),

the capped but sail-less windmill 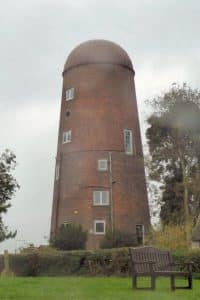 and this gable end of a village house.

Monday morning saw the boats descend the last two Braunston locks (the end of a fine summer of canal and river cruising, of lock sharing and of 68 nights spent moored near each other).

It was the end of the Monty visits, when the Tentatrice Boat Dog would jump on board Cleddau and make it quite clear that he was expecting a drink of water (always freshly provided from the filter tap, always served in the square plastic ex-mushroom box!) 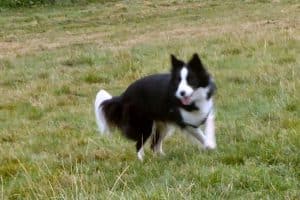 Less noteworthy perhaps was the end of the pink fishing net, much cherished over the years by the Cheshire One, it being broken beyond repair and consigned to a Braunston rubbish skip.

The boats proceeded towards Braunston Turn (for the Cleddau crew this was the end of their time on the Grand Union Canal). Here at the Junction after a moment of formation flying cruising 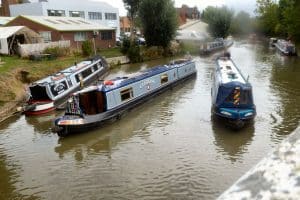 the boats went their separate ways,

Tentatrice bearing left back to Worcestershire 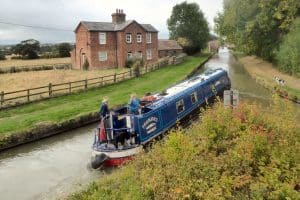 and Cleddau keeping right along the North Oxford Canal, heading for new winter quarters in Staffordshire.

It was a jostle to get out of Braunston on the North Oxford route: it was along here that Exemplary Neighbours paid a call and it was along here once that nb Waiouru was passed – her crew now of course back in Australia, Jan in Perth and Tom on his transcontinental expedition…

A look back at the village provides classic views: Braunston Church

and the very noticeable ridge and furrow formations in the fields.

The North Oxford winds its slow way out of Northamptonshire and into Warwickshire. It’s a quiet route, interrupted these days by the large new Dunchurch Pools Marina

7 miles from Braunston are the Hillmorton Locks. They are paired narrow locks, apparently the busiest on the canal network. Since high summer water restrictions have been in place. When Cleddau arrived at about 1.30 pm there were four boats ahead waiting to go through the top lock and three queuing to go down the middle lock. Only one of each pair of locks was usable, the other being padlocked shut.

“The locks close at 5pm,” the boater fourth in the queue cheerily announced

. Nothing was happening, nothing was moving… A sixth boat drew in at the back of the queue and soon the Captain was deep in conversation, indicating the Pembrokeshire county flag and the flag of St David. “Our daughter is a verger at St David’s Cathedral,” said the Nottingham-based boater. Should this count as a late season Monkton Moment*…?

A lock keeper appeared, wanting a boat count and letting more water down the flight via the padlocked offside top chamber. Slowly boats began to move, congestion building up again at the one operating middle lock where one ground paddle was out of action.

Then, an act of generosity: the lock keeper unlocked the other middle lock to allow more traffic.

“Don’t want boats still in here at 5 o’clock,” was his reasoning. As if a new checkout lane had been opened at the supermarket the Captain slid the trolley boat across to the towpath side, proceeded down through the lock and on straight into a full bottom lock. 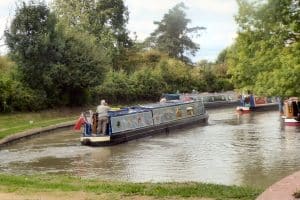 A watch check revealed a two hour transit from arrival at the top to exit from the bottom. Onwards, to moor overnight near Rugby Golf Course.

Halfie in a recent blog had mentioned the building works at Hillmorton and thereabouts.  Wow – the earth movers have been busy.

This piece of stunning landscape was made famous in 1927 when its familiar radio masts transmitted the country’s first ever  phone conversation across the globe. This call was made to America, and was received in a town in Maine, called Houlton.

Beyond the golf course there’s a new bridge being built across the canal, a road bridge into Houlton perhaps, although a passing boater hissed that it was HS2…

After a quick shopping dive into Rugby on Tuesday it was onward, trying to find a less congested spot

and to make further travel progress before the forecast winds and rains made boating too uncomfortable. The spot opposite the farm before All Oaks Wood is a pleasant mooring, though, as was discovered, exposed to strong south westerly winds when mooring up…

after a mile or so of running parallel to the railway line, 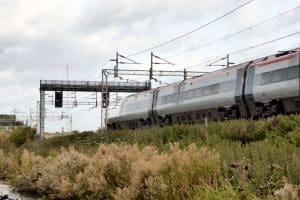 after acres of pylons and electrical switching gear at Hawkesbury

and after crossing with dozens of other travelling boats.

This was Wednesday, mid morning: to moor (in high winds and still be on the North Oxford) or not to moor (and do the sharp U-turn in high winds onto the Coventry Canal) – that was the question…

and despite “Sea state 1 on the canals,” (Captain’s judgement)

it was an easier cruise for the last few miles to Marston Junction as the wind was largely behind the boat.

There’s leaf soup on the water,

a leaf blown into the mid-morning coffee mug and leaves in strange places inside the boat – it’s the end of summer, seemingly!