Ellesmere Port to Chester: 8.5 miles, 2 locks
It was a great day for umbrellas – but less of a good one for boat mooring.
Get up the two locks early from the lower basin before there was any boat traffic, assemble rubbish for drop off at the bins behind the Visitor Centre, sort laundry for the washing machine, refill with water, proceed to Chester, find a good mooring at Tower Wharf – that was the plan.
Coming up the locks was straightforward enough, though slow, as one paddle only is to be used to drain the top lock.

In twenty minutes the boat was at the upper level – but unable to move further. The museum trip boat was still moored outside the cafe blocking the lock exit, a second trip boat was manoeuvring to get to the water point,

another boat was moored ahead – another arrived from Chester

and another followed up the locks from an overnight mooring below. “We need to fill up with water,” Boatwif explained. Ropes were passed and tugged and returned; the newer trip boat shuffled forward to load her passengers and that gave Cleddau the best chance yet of a drink from the tap. There still remained the issue of getting the hose pipe over the very high bow of the museum trip boat.

Try throwing a flat hose as if it were a rope… try a second time and that might be more successful.A full ninety minutes after first starting out the boat was ready to continue – away from petro-chemical chimneys and motorway bridges and scrubby grass and back towards Chester. Fine spots of rain began to float down – then drizzle – then steadier rain. The Captain grabbed his favourite large umbrella and continued south.

At one point the stern of a boat was adrift it seemed in the centre of the canal. It soon became apparent that the efforts of two chaps to install fencing around a drinking hole for stock was being closely supervised by many pairs of eyes…

Back towards Chester – golfing umbrellas in evidence.

Closer to the city – umbrellas along the towpath. The garden elephant was enjoying the rain,

a blue whale too!

Mooring up proved every bit as frustrating as the watering incident earlier in the day: no room in Tower Wharf basin, shallow water along the towpath, finally deeper water but lack of holes onto which to secure mooring ropes. Meanwhile the rain rained harder…
Against usual practice Boatwif succumbed to weather conditions and took a short blue umbrella on her mission up to the city centre. Without it she would have felt severely under-dressed!
There’s a Bridge of Sighs over which prisoners used to be taken for their Last Rites before execution: below lurks the canal

Cleddau had passed along on sunny Saturday. Soon Chester’s famous black and white double decker shops were in view.

Chester is a popular destination; a group of American tourists exchanged news of their lunch-time menus while within one shop Welsh (with a North Wales accent) was heard. It’s a prosperous-looking place, although a bridal gallery has closed. Five or six steps down below street level was a Cath Kidston store. Now that’s a successful business, there’s a large warehouse with that name alongside the M1 somewhere in the East Midlands. Just look at the seaside names on this bag: 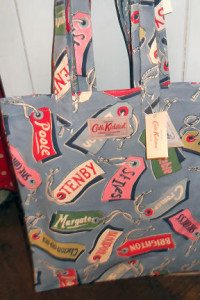 emit a sigh, return to the street and push up the umbrella again! Outside on the street there were umbrella gatherings

– and umbrellas in use as rain cover for street traders’ stalls!

after which the camera was tucked away for its own protection. As for the Roman Amphitheatre – maybe tomorrow…

(For those readers referring to the outline plan: the gas fridge man has been in contact, he’ll look at the ignition system next Monday – just need to get to Market Drayton first. “That’s quite a lot of locks,” says the Captain…)