At and below sea level

Wednesday
Stanground Lock is about a mile from Peterborough’s Embankment along the Stanground Back River. . Boaters need to book passage through this lock which lowers boats down to sea level. 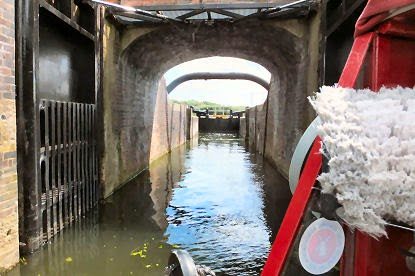 The lock keeper (like her father before her) adores her job and lives in a delightful house beside her lock. On locking through boat names and numbers are recorded, and in exchange a Middle Level Navigation Notes booklet and some fenland tourist information is handed to the boater.
It is soon apparent that Middle Level waterway structures are purely functional, 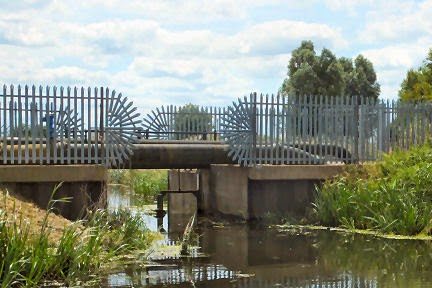 not adorned with any decorative details at all.

Early on the first wind turbines are seen.

Tractors are frequent in the fields and on the roads alongside the waterway, and in the distance at Whittlesey is a McCain sign, a food processing factory obviously. Brick towers are here too, remnants of Whittlesey’s brick industry.
“It’ll take about an hour and a half to Ashline Lock,” the helpful Stanground lock keeper advised. “Then you’ll be below sea level.” On the cruise went, passing slowly around Whittlesey. The scene changed: gone was the large wide sky, for now the boat was creeping along a stone lined narrow channel.
“Isn’t this where that awful corner is?” remarked the Captain. Boatwif took up a lookout position on the front deck. Narrower the channel becomes

before it twists at a sharp 90º angle around the corner. When a boat won’t bend in the middle its nose can only engage with the offside bank, whatever it’s made off. Happily some mud and undergrowth provided a forgiving cushion on the turn. For a while the channel crept on under tree cover before emerging beside a vast sports field, at the end of which is Ashline Lock.
Faint memories stirred from 2010 that this had been a “slow lock”. On Wednesday  for nearly two hours it became a no go lock. A pale blue boat

appeared stuck on the weir side of the lock – it certainly wasn’t moving, while on the lock landing opposite a 70 foot boat waited to follow on. Was it that the crew of the pale blue boat just couldn’t work out what to do? Puzzlingly here the windlass (paddle winder) 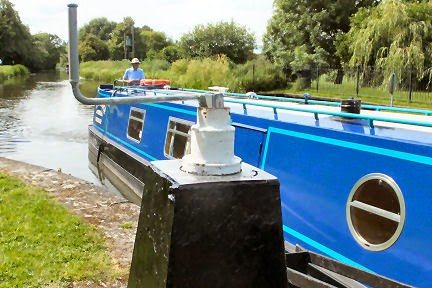 needs to be placed on top of each pillar beside the upper lock gate and wound horizontally. No notices explain this required procedure so a degree of confusion is understandable. Add into the cocktail that each paddle raising /lowering takes a minimum of 63 slow stiff revolutions and you may begin to appreciate why progress is slow…
Ashline Lock: arrived at 1430 – departed at 1630…
Now Cleddau and Tentatrice were below sea level. Crews from their low position on the water could look up at speeding vans, cars, lorries and tractors very close by but above the water level.
Here is one of several second world war pill boxes

positioned beside the channel.
Time was ticking on – the lost hours at Ashline Lock pushed back the likely arrival time in March, the planned mooring site. Would there be a chance to moor instead at Floods Ferry marina, shortly after the Greenwich Meridian sign?

No such luck…
At the smart wharf on the outskirts of March? No, PRIVATE, Middle Level Commissioners site.
Outside Fox’s Narrowboats Marina – no, far too cramped.
Onwards the boats crept, further and further into March, under leafy branches, where every house and cottage makes the most of its riverside mooring…

Finally at the Riverside Park a space was found. The boats breasted up – and for anyone with enough energy left here was just the thing

– an adult fitness facility with training apparatus located across the park!
Thursday
Techno Son-in-Law should be proud of his influence; in recent days the Captain on long lock-free stretches has deployed the Captain’s Perch,

checked speed with the Satnav

and even utilised the walkie talkie radios between the boats.

Boatwif was allowed a ‘March mooch’ on Thursday morning, to be completed of course before 11am. The town centre is compact, the skyline dominated by the five storey high Town Hall.

A bell, a gift from a twin town, hangs above the impressive frontage 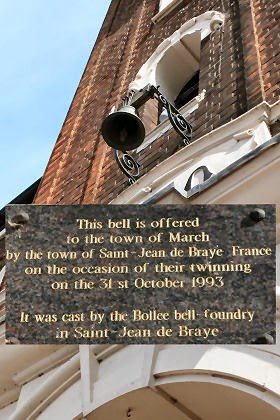 although it is almost lost against the sheer height of the building. Floral displays are everywhere in March, on the Town Bridge parapets, 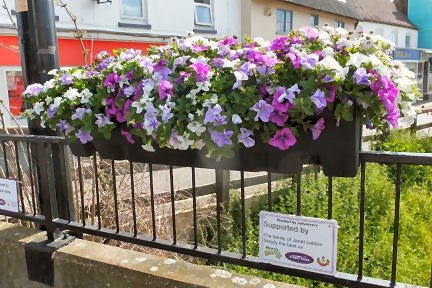 in tiers in public spaces,

hanging from lamp posts. It is perhaps no surprise that in a town surrounded by vast tracts of agricultural land its museum has an array of farming implements parked outside.

St Peter’s Church is Victorian, built in 1881. Everything about it seems to typify the mid-Victorian era: solid dark woodwork, 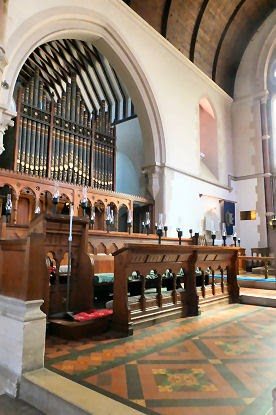 a fine array of organ pipes and stained glass windows

– and even some lace table coverings.

The large sign outside the church seemed rather brash

– but although the words are clear the event is obscure!
In the town voices are speaking in Polish 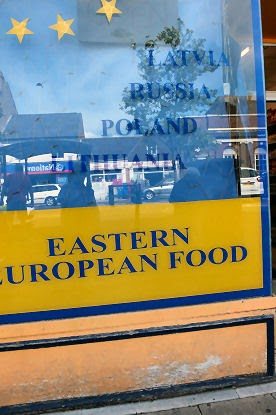 or with a rural Fenland burr.
The boat trip proceeded: under the Town Bridge, past a mile or so of lovingly kept garden spaces – and out again into the fens. You cannot help but wonder how a Russian gun

The vista changes little. A single property in the distance can arouse excitement. To navigate in these parts a waterways map is crucial: the few signposts

are faded, bent  and the lettering far too small to be useful!  A left at Low Corner is needed to go the last mile or so to Marmont Priory Lock. Here a lady lock keeper guards her gates. She is a fine interrogator: “And where do you live… Is your daughter well… grandchildren?” She passes on hearsay, thrives on tales of boaty adventures – and there’s a tin on a chair for tips.
Back up at sea level it’s onwards to Upwell, a long strip village in Norfolk.

After miles of watery emptiness this seems a busy place, roads running either side of what is now Well Creek. Bridges are even lower, the water shallower and muddier.
The mooring stage in Upwell is a delight 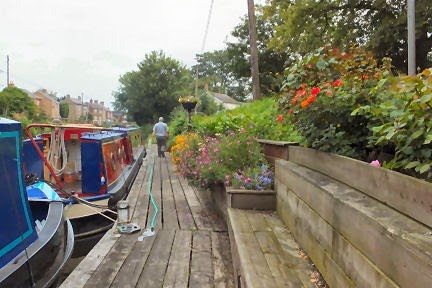 (apart from the traffic noise). Alongside is a garden of herbs and flowers – and just yards from the mooring is Upwell Church, its annual flower festival under way this weekend. It’s the 60th one, the theme this year “A Good Read”.  Just look at a couple of these displays. 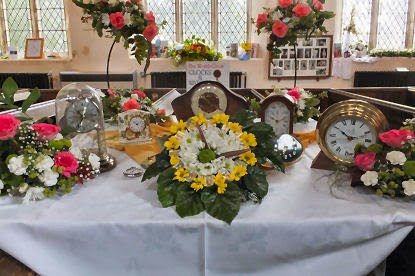 Friday
There were just two hours of cruising still to do along Well Creek to join the River Great Ouse. Preparations were made on Friday morning. With even lower bridges still ahead the Tentatrice cratch was dismantled and with a forecast of heavy showers waterproof gear was close to hand…
True – the bridges were lower, the mud in the water gloopier

and the rainstorm heavy. Domestic buildings were stranger too!

If you want a fix on where the boats have come to try to think of where Downham Market is – the evening’s moorings are about five miles to the south.
Now Cleddau awaits her passage through Salter’s Lode

out onto the tidal Great Ouse to head upstream to Denver Sluice. 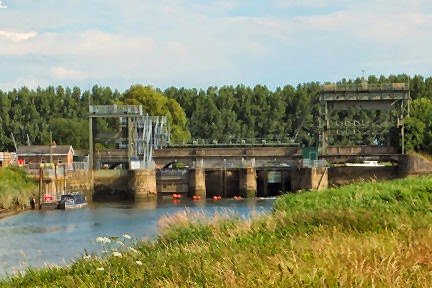 The tide should be right at 0930 on Saturday.