To answer the first question (bad habit becoming tradition) the Captain would state 25 years. The 12 years or so of January visits to Stratford-upon-Avon then are still “bad habits”, albeit very enjoyable ones. At home there are theatre programmes from the Royal Shakespeare Company) retained from January 2009 onwards.  Hence the annual winter gazing over Bancroft Basin in Stratford, for only the last decade and a bit remains a mere bad habit. 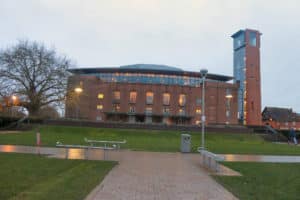 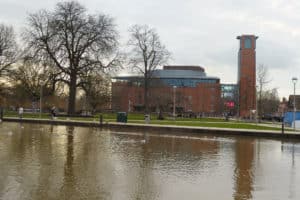 January is not only Visit Stratford Month, it is also Wedding Anniversary Month. Under the Captain’s 25-year rule it was quite some years ago that the being married habit became a tradition – and since retirement in 2007 there has been time and diary space each year to celebrate the wedding anniversary. It was in Stratford-upon-Avon  on a very snowy day in January 2010 that the Captain presented Boatwif with a ring to mark 40 years of “wedded bliss”. 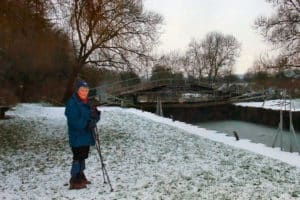 Now ten years on, in January 2020, the Big Five O has been reached. 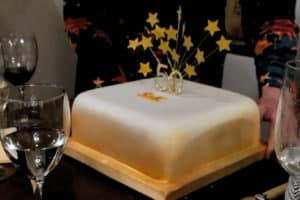 Luck, good health (lifelong beneficiaries of the NHS), stable and supportive families, a shared sense of Hiraeth gained from growing up in a stunning landscape, similar values and interests – they have all played their part in keeping this particular show on the road…

Was there a precise moment of decision that the only place to mark the 50th wedding anniversary was back in South Pembrokeshire?  Perhaps it was more a slow realisation that a Sunday service at the church 50 years to the day would be an appropriate place to mark the half century. 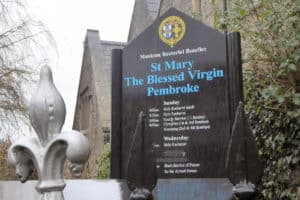 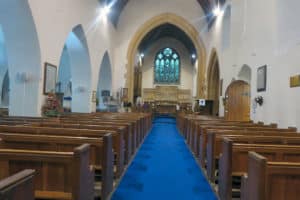 Down then, to South Pembrokeshire, checking out the waves and the state of the tide on a blustery afternoon. 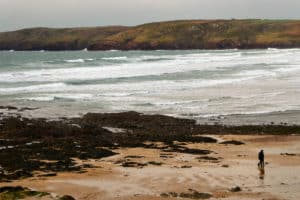 On the evening of 4th January the Captain and Boatwif found themselves pawns, trapped in a scheme devised by Senior Sis, overseen by Techno Son-in-Law… 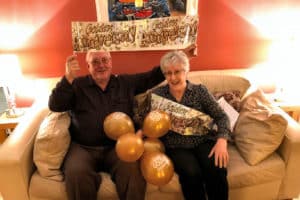 Sunday 5th January: fifty years on the church bells rang out for Matins. There was a warm welcome from the congregation, two hymns included from the 1970 wedding service and lessons read by Scottish Sis and Baby Sis.

(Below: Pembroke Castle from the west with church tower visible and arrowed) 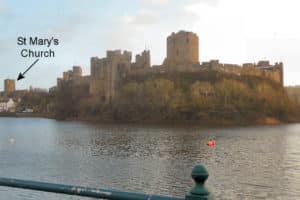 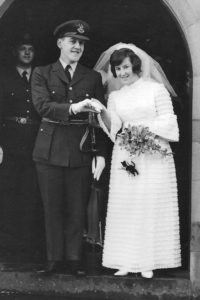 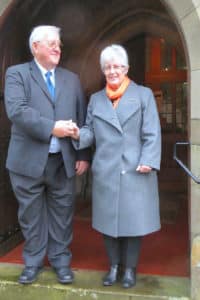 Heading back east, it being January, there was a diversion to Stratford-upon-Avon. 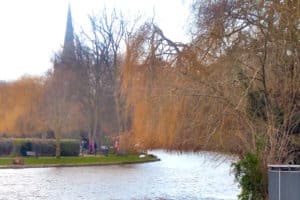 or downstream past Holy Trinity Church and back to town across the racecourse (snow covered in 2010). 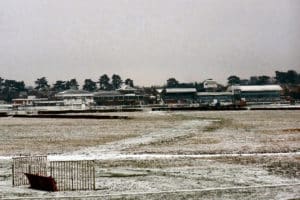 Still a bad habit, though enjoyable too, was a rendezvous with Brum Cuz for family catch up – and lunch in forties-themed Fourteas .

Playing back to back in the Swan Theatre were two plays 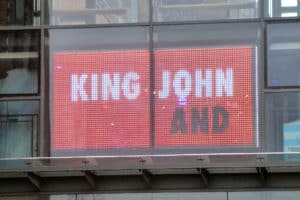 . King John is a rarely performed Shakespearean history, performed with verve and pace in swinging sixties dress. The other play, A Museum in Baghdad, 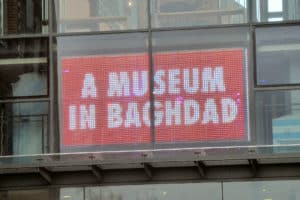 is a modern piece inspired initially by the work of English archaeologist Gertrude Bell who set up a museum in 1926. 80 years later in 2006 another Baghdad archaeologist is wrestling with similar challenges. Who should have access to artefacts and treasures? The play proved engaging, enjoyable and thought-provoking, although to some minds it proved controversial. .

What a joyful way it was to start the new year and a new decade: time and special celebrations with family in a very familiar landscape, followed by world class theatre right in the heart of England.

Now a germ of an idea has begun to form: wouldn’t a cruise down to Stratford and along the Avon be just the thing to look forward to later in the year…?

*Many thanks to Baby Sis, who liaised so well with the church and the cake’s creator