There had been a sharp right at Marston Junction off the Coventry Canal.  High winds and poor weather drove Cleddau to hunker down in a safe setting for a couple of days. (Wednesday 19th and Thursday 20th September).

There are plenty of mooring areas along the Ashby Canal although a tree-free stretch with straight metal piling to hook or chain onto between Bridges 2 and 3 was already occupied by several boats. In the high winds

the boat was secured and minutes later two other boats arrived to tie up and retreat below decks. Those next few days were not ones to hang laundry out to blow in the bracing gales, nor to have windows or hatches unsecured.

A few hours confined inside the boat and cabin fever can strike. The Captain, via a reference on another boating blog and Google maps, discovered that a walk from Bridge 5 led through a housing estate in Bulkington to a Costcutter store… What else does one do when confined to quarters during bad weather? Welsh cakes were made, the tools and coal for the solid fuel fire were retrieved from under the front deck, silly summer clothes were swapped for warmer weight ones, time was invested in some computer projects… If not the very roughest of weather ever spent afloat it certainly was the longest period of being buffeted and bashed by the elements…

When the winds lessened Cleddau moved on.

The Ashby isn’t entirely unknown territory as this lock-free canal, stretching north east up through Leicestershire, was first cruised in April 2017 . About 6 miles along from its junction with the Coventry Canal the Ashby passes through Hinckley, although not very close to the town centre. Once known as a hosiery town, now it is the Triumph motorcycle factory that dominates the canal side landscape.

For those really keen on motor cycles there’s an “immersive visitor experience”.

Once past Hinckley the canal returns to its rural character.  A small mooring site is presided over by a pink hippo (why?!)

and in the autumnal temperatures occasional plumes of smoke rose through boat chimneys. Peering through one such plume it appeared that a blue wall had been built in front of a bridge hole…

When eyes and brains can’t work out the situation it’s best to pull in and investigate on foot. Another boater trotted along the towpath too but came back, mystified. The Captain armed himself with the long barge pole and set off. The stern of a blue boat was tied to the bank but the bow was jammed across to the opposite bank. Was nobody aboard? The Captain, pirate-like and determined to resolve the situation, boarded the stern and started to work his way along the outside of the boat.

Then the bow doors flew open; a tousle-haired male appearing. Confused, he viewed the scene, his boat at right angles to the towpath and mumbled: “I’ve been on night shift. Asleep. I must get dressed…”

past a mooring area with an unusual surface arrangement.

there was chance to see this proud road sign

and later, along Main Street, this very colourful village sign. 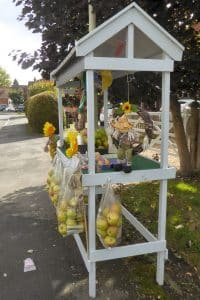 It’s a one shop village (closed on weekdays between 1315 and 1445) and another boater patiently observed that eight other potential shoppers had tried and failed to gain access during the long lunch hour break. Even if the retail opportunities are very limited here you have to recognise its place in history.  The window sills outside the church still show where the Bosworth soldiers sharpened their swords

and the modern houses on Crown Hill are where in 1485 Henry Tudor was crowned king of England and Wales.

This is Bosworth Battlefield country and a revisit to the site  became compelling. May there not be trouble flaunting a Tudor Rose in these Plantaganet parts…

From Sutton Cheney Wharf it is an easy walk through Ambion Wood to the Bosworth Heritage Centre. 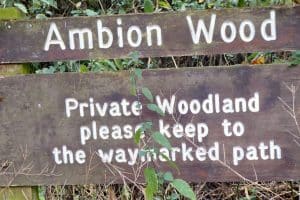 The Battlefield Trail provides plenty of thoughts and items to help create that August scene in 1485.

Inside the Centre via video, lighting and a moving map

the course of the battle is vividly explained.

An array of arrow types was displayed at a weekend Yorkist encampment. 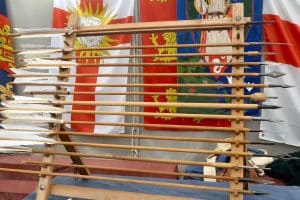 Here is an arrow used for bringing a horse down:

Here a buckler was being demonstrated.

There is renewed battling at Bosworth now: 533 years after the battle that resulted in a crown being plucked from a hawthorn bush and presented to Henry Tudor, modern day Yorkist and Henry Tudor supporters are united in opposition to a planning application to create a test track along the south western edge of the Bosworth site. See reports in The Daily Telegraph  and The Independent.

“Synchronicity” is a lovely word: what else can express the delightful coincidence of cruising past nb Equinox on the equinox…! There she lay about 10 miles along the Ashby Canal. 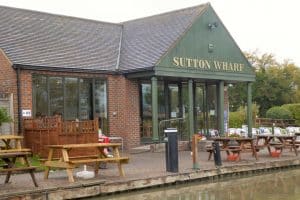 to head back to Marston Junction and the main line north. These are some curious sights en route: 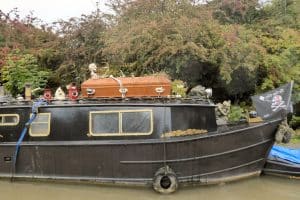 2) nb Alaska (is this the same Alaska that used to be moored on the North Oxford Canal near Ansty?)

Landscape clues, old wharves and bridge abutments are a reminder of the industrial past.

on the Atherstone outskirts (Remember, this was a hat town).

Atherstone was once an important hatting town, and became well known for its felt hats. The industry began in the 17th century and at its height  there were seven firms employing 3,000 people. Due to cheap imports and a decline in the wearing of hats, the trade had largely died out by the 1970s with just three companies remaining, Denham & Hargrave Ltd, Vero & Everitt Ltd and Wilson & Stafford Ltd. The production of felt hats in the town ceased altogether with the closure of the Wilson & Stafford factory in 1999.    (Wikipedia)

For boaters it is the 11 lovely locks at Atherstone that are remembered. And at Bottom Lock strange fungi are embedded in the offside gate.

Onwards on Tuesday, pausing as ever to look into the beautiful Abbey Church at Polesworth.

Not much further on the underside of the M42 bridge is another reference to the coal mining industry.

It’s Staffordshire now and that point of curiosity, the first house at Amington, is displaying a SOLD sign.  Will on future travels, the DDR (East German) border post in its garden still be seen…?

and then there is the (relative) excitement of the two Glascote Locks.

Over the River Tame, through Fazeley Junction, onto the Birmingham and Fazeley Canal, 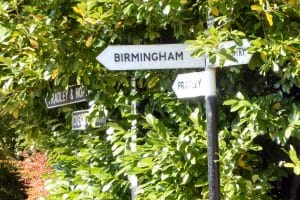 to tie up  at school home time just past Hopwas School Bridge.

At least for now the battling with strong winds is done: sunny days have returned

and there remain just 30¼ miles, 8 locks and 0 county borders to negotiate to Aston Marina…