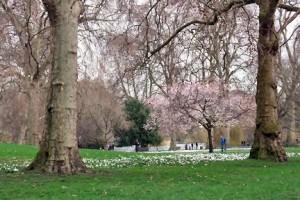 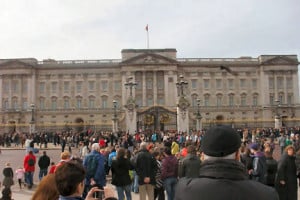 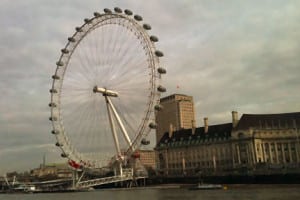 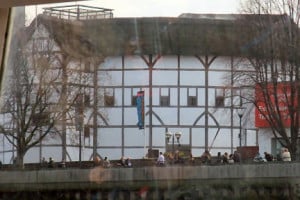 A plan was hatched to take the Cheshire One on her first trip to . Fast East Midland train to St Pancras, underground trains to Westminster, a walk to take in key sights, a boat trip down to Tower Bridge, more underground trains to South Kensington to view impressive dinosaurs, train back to Bedford either before or after tea…

It started well; we arrived at Bedford station in plenty of time, time enough to chat with an ex-colleague, bound with a friend for the V & A, whose three grandchildren are about to relocate to Taiwan. With her friend, another boater, exchanges were made about the Macc, the , the Anderton Boat Lift and Nantwich.

At the stunningly restored St Pancras terminus the Cheshire One skipped energetically along the platform, held still on the escalator, then skipped again along the vast concourse to the underground trains. Here she was, at last on TV’s  “Underground Ernie”.  We changed lines and just after 1030 emerged near .  There was Big Ben, so huge, so tall, so beautiful.  We peered through the railings of the Houses of Parliament and looked across the Green to Westminster Abbey. Then we walked over to .  We trotted past fine tall government buildings, gazed past the security gates up , continued on along past the famous Cenotaph, past the memorial to Women in World War 2, past a TV crew preparing to broadcast outside the Foreign Office. Horses! Two mounted police officers approached on the opposite side of the road; a horse and sentry stood statue-still at Horse Guards Parade.  More mounted horses: we seemed to have coincided with a change of duty.  We raced through the archway and joined the crowds and a German TV crew watching while navy cloaked Household Cavalry surrendered duty to scarlet cloaked colleagues. We crossed the parade ground and strolled in balmy spring air through St James’s Park to the Mall.  Up the ceremonial route we walked, overtaken by cabs and horse-drawn carriages (practising for a Wedding?)  At the Queen was in, for the Royal Standard streamed in the breeze at rooftop level.  Crowds surged around the railings and up on the Victoria Memorial, alternating their gaze between Palace balcony and the arrow-straight red-surfaced Mall.  Back towards via Birdcage Walk and Queen Anne’s Gate.  Listen – the last few chimes of Big Ben at ! Via pedestrian crossing and subway we made our way to Westminster Pier. Which boat trip to take? Hastily we bought our tickets, then raced down and down the long ramps to the River Thames.  A trip boat was about to depart.  We clambered aboard and (not easily) found some seats.

The noise was immense: gabble and chatter in a multitude of languages. The engines roared as the boat headed across the river towards the London Eye. Bow-thrusters (stern thrusters too?)  aided nifty manoeuvring to a pier below the Eye. More passengers came on board and then the boat slowly turned to face Big Ben. A voice assured us of safety considerations and then with sardonic humour provided a running commentary. The gabble quelled as heads turned and eyes strained to observe evidence of the six metre tidal drop, the renovated Savoy Hotel, former wharves now transformed into smart apartments, the thatched roof Globe Theatre, the concrete massif of the National Theatre, HMS Belfast‘s bow, identical in design to that of Titanic… For forty minutes we were afloat on a flat calm surface, overtaken by patrol boats and faster passenger vessels heading further downstream. At we berthed and climbed up towards the .  In sunshine we sat and ate our picnic lunches; behind us Beefeaters were guiding tourists around the Tower while in front of us water began to lap at the bottom of the Queen’s Stairs, access point to the Tower for kings, queens and high-ranking state visitors.  Tourists, workers, runners passed by and the Cheshire One, re-energised, skipped to and fro.

Next destination: . We walked up Tower Hill, round the sturdy walls and grassy moat towards the Underground. Cheshire Dad pointed out the archers high on the battlements; Cheshire One spotted pictures of the Crown Jewels. Out we sped on the District & Circle  line. The subways below Kensington seemed congested; crowds were converging here to access the , the , the and …  We shuffled along the pavement, impeded by road works and arrived below the imposing and magnificent highly decorative Natural History Museum.  We had plenty of time to examine the beautiful brickwork, the arched doorway, the animal statues, the metal tracery at rooftop level – and other visitors in the queue. After 30 minutes or so of slowly moving forward we reached a viewpoint and gazed down at what would be another hour’s worth of queue. Disappointed we vowed to return to the dinosaurs another (earlier!) day and made our way to .  From far underground the lift took us 15 storeys upwards to street level.  There noise and hubbub, laughter and applause. We walked past a golden statue of a man and a silver one of a fine lady. A human dog spoke from his basket; an entertainer begged appreciation for his fine footwork.  But the largest crowd watched and laughed at ‘Charlie Chaplin’. In mime, backed by music, he recruited a juvenile assistant.  The Cheshire One sank to the pavement, eager to sit and watch, to watch and sit.

To be ahead of or in the midst of the rush hour? That was the question. Back to St Pancras. A run for the 1600 train, a phone call for a “Grampy taxi” to pick us up at twenty to five. While Cheshire One ate her tea the adults swiftly drank one mug of tea, immediately followed by another…

And favourite memory for the Cheshire One? Why, Big Ben, of course, plus seeing and the London Eye!