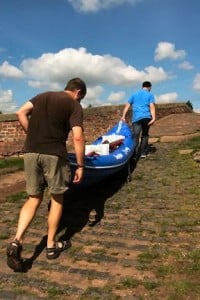 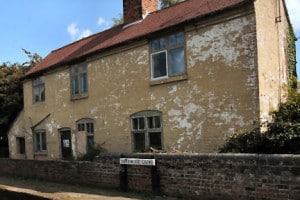 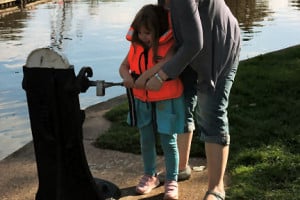 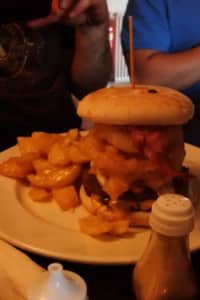 Tuesday 31st August: Tixall Wide to Penkridge, 9 miles 5 locks
Had things gone according to plan today’s title may have been something like Pirates Board Boat At Dawn or Intruders Arrived by Kayak , but things didn’t go entirely to plan – although they worked out very nicely in the end.
We were comfortably tied up on Tixall Wide and some of the Cheshire Clan had announced plans for a boarding party. They would leave Car A at X, put car B at Y and be with us by 0930 (hardly dawn, but early enough). I provided a postcode for parking and email details of how to find us. Then the techno son-in-law sent messages from his i-phone: ” I might bring the kayak”and “We might try catching crayfish”. Being informed by a Bedford friend that crayfishing requires a licence (at least on the Great Ouse) we suggested he should have one too.
A phone call about 0900 suggested that arrival time might be nearer 1030. No matter – what more beautiful place, what more glorious morning could there be on which to sit on a boat and muse, and read, and take in the views, and chat with passersby, and do a crossword, and even wield the hoover.  Time crept on and on. Eventually a phone enquiry: “Where are you? Which bridge did you say to cross?  But we’ve got the kayak, we’ve passed a lock, a long time ago.” Paddling towards Nottingham they were, wrong direction, wrong towpath, wrong canal… I gave instructions, set out to meet them at the Junction (Great Haywood) that they had passed and failed to notice. Up puffed the techno father and the recent bridegroom, carrying kayak between them, the recent bride weighed down with wedding photo album to show the aunt, the Cheshire One hungry, ready to eat her backpacked lunch… Eventual arrival time at moored up Cleddau ? Some three hours after the would-be dawn raid!
So kettle on, Welsh cakes proffered and we cast off, heading south west along the weavy Staffordshire and Worcestershire Canal. Lunch perked up the new crew’s strength. The Techno One can wind and push, haul and steer but recent Bride and Groom required instruction. In calm and sunny conditions we passed fields and gardens, along here even ornamental pigs in evidence.  A delay, an incident, boats weaving to and fro: a huge and deep old workboat was stuck, unable to shift its heavy stern from the muddy bottom. Engine revving it fought its way back into the main stream. The Cheshire One, forsaking the crabbing bucket for her favoured pink fishing net, rowed and paddled us forward. Leaves and twigs were easy to catch, then unusual fish – apples. Apples aplenty floated beside us, trees ahead well laden with the ripening fruit. A Development Opportunity awaits a buyer of the lock cottage at  Deptmore. “You’ve got extra lock keepers with you then,” said a downcoming boater, assessing our crew lined up lock side.
The steady roar of traffic reached us, increasing, and then through the tunnel we sailed, under the M6 near Stafford, towards the light at the other side. And at the other side, a surprising view: vans and lorries, cars and caravans bowled steadily along this often congested stretch of motorway. We crawled on, climbing each deep and narrow lock, the recent groom becoming chief gate pusher, recent bride chief windlass wielder, the Cheshire One an expert helper.  We arrived at Penkridge, moored up the boat, then strolled to The Boat to be reunited with recent bride’s car. Pub meals all round, a towering Boaten Burger for the lean unhungry Techno One, carpark farewells – and yes, it had all worked out nicely in the end!
Plan for tomorrow: to Autherley Junction, then north onto the Shropshire Union Canal.