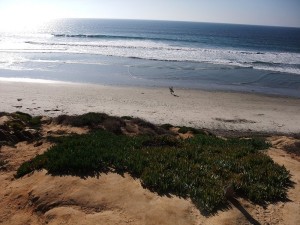 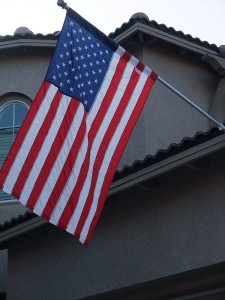 ​ The odd, occasional, new entry from a boatless crew… Boatwif and the Captain have flown into San Diego for some grandparent time with the Californian Three.

Drawn always to water we have in the past two days flown far above one ocean – and gazed upon another. To the travel events first. When asked how long it takes to do a door to door trip my usual reply Macclesfield – San Marcos is 21 hours minimum. Such a trip involves flying from Manchester Airport, into an East Coast airport, Philadelphia this time, and then transferring onto an internal flight to San Diego. So Tuesday morning saw us up at 0500 … and finally falling into bed at 0845 on Wednesday morning GMT, a record 24.75 hour trip! This time the Manchester leg was on time, we benefitted from three seats for two of us and a smooth transition between passport control, through baggage collection, to customs,to deliver suitcases to baggage transfer, to queue through security and to relocate to correct

How well it was all going – until the combined effects of East Coast bad weather, West Coast fog, misplaced aeroplanes and  crews left us with a long delay. Some three hours later than expected we were finally on the runway ready to roll – but with

22 other aircraft ahead in the take-off queue! No aircraft could have been more packed than that flight, East Coasters in their

Arrival at San Diego: we sliced down through the white cloud, the city spread below, the curve of the Coronado Bridge apparent,

and we headed north. Up the I5 freeway, keeping the coast on the left, following signs for Los Angeles, heading inland at Carlsbad. Drive due east

to San Marcos. At 1140pm local time we arrived at the neighbourhood: "Access barred" pronounced the lady in the metalpress pad box by the

security gates. The numbers had been changed! The mobile phone wouldn't connect! Boatwif flung open the car door, gained access via the pedestrian

gate, tore up the steep hill past all the sleeping houses – and gently tapped at number 408. The Son, the only still awake

person, pulled on some shoes, drove down the hill and his electronic windscreen gadget opened the gates. A kettle, a teapot, a bed:

we had indeed arrived!

The Son gave swift briefing instructions: The children are excited; they invite you to breakfast with them; it must be at 0755.

The throb of aircraft engines had only just died away when Cals One and Two arrived, full of swift chatter. Ears needed to re-tune

confusions. The students left for school, the grandparents were free to unpack squashed luggage and to acquaint themselves with Cal

to the Number 1 Fire House. We, the boat crew, seized the moment: ignore jet lag, head for the coast, find our favourite lunch-time watering

hole on the Pacific Coast Highway. There it still was, the Pannikin, a one-time railroad halt, now a cool Californian cafe> From the wooden beams

hang a cart wheel and a once brass tuba. Real people hang out in it, the notice-board is headed simply with the title "Stuff", small birds fly into

and out of the cafe area, students engage in earnest discussion, there is no plastic in sight – and the cook provides fine Greek Eggs up until 2pm, an

A Los Angeles Times proclaimed the news of a Royal Engagement, we bought a copy for 75 cents and drove a couple of miles north. There we gazed upon the

Pacific Ocean; not that Carlsbad State Beach is the prettiest beach or has the highest cliffs or the greatest surf. But here you see an authentic Californian lifestyle, a

November afternoon, one man flying a kite, a couple of sunbathers and three hopeful surfers.

Time was running out: some essential groceries to buy, a liaison at the dentists' office to entertain children various during routine check up proceedings, a dash home and then a

second liaison at the Olive Garden, an Italian eatery over the hill in Escondido, the Son arriving direct from the workplace.

In all it was an excellent first full day: the sun shone on hill and ocean, the children laughed and talked – and we held off going to bed until 1015pm!

Oh, the business of -5 hours (East Coast), – another 3 (West Coast); at 4am the Captain was wide awake and offering to make a pot of tea… Readers, I turned the offer down!