It’s been Delivery Day minus 1… Ramsdell Hall railings to Westport Lake.
The dog walkers had walked the dogs and the farmer fed his cattle by the time Cleddau pulled away from the black and white railings on Friday morning. 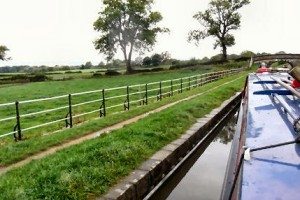 First pause was at the watering point just before Hall Green lock. This sign must have been displayed for a while (issued in the days of British Waterways) 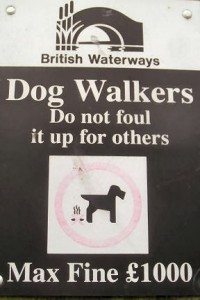 but the wording is apt.
Down then (by a bare foot) through the stop lock which separated the waters of two canals, the Macclesfield and the Trent and Mersey. 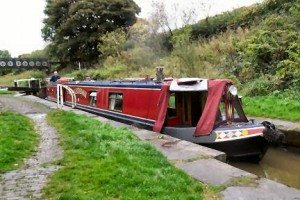 After a bare half mile the canal crosses Red Bull Aqueduct above the Trent and Mersey as it begins its plunge down Heartbreak Hill. 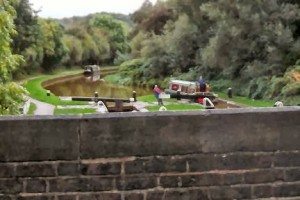 There’s a sharp left and a sharp right hand turn before the Harecastle Tunnel is reached, time to muse about Flirty Gertie 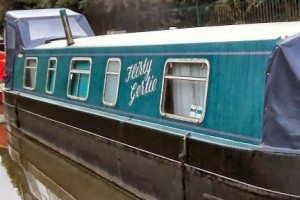 (memories of annual visits to a great aunt Gertie come to mind, she so formal and as far from flirty as is possible to imagine) and then this boat, 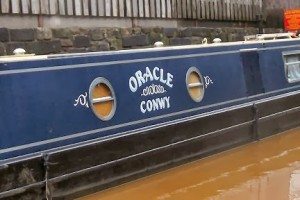 Oracleof Conwy (the Captain had family connections there). As the Harecastle Tunnel was reached the water began to show the characteristic reddy-orange colour. 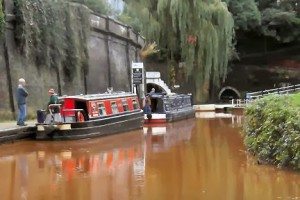 There was a short queue but a long pause until a single northbound boat had emerged from the 2,926 yard tunnel.
Enough diesel?  Check.
Tunnel lights?  Check.
Internal lights?  Check.
Ah, diesel. There’s a point.  Usually the Captain keeps the fuel tank pretty full but not so on this trip. There was a moment of realisation yesterday – with a tank full of water in the bow and the stern lighter than usual at the back the boat did not make its usual rattling protests in a shallow canal. There was no or very little prop cavitation. Why has it taken five years to discover this…?
Into the tunnel, where the distance from end to end is marked out every twenty five yards… For ages emergency arrow signs point behind to the nearest point of exit…
Ooh, half way point (after 22 minutes of travel). 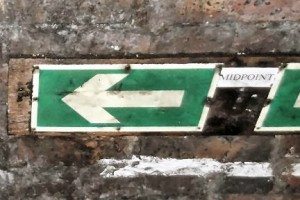 Then a glimpse of some words… 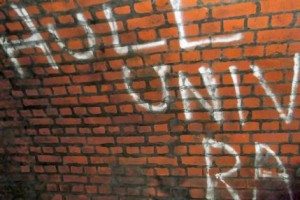 Nearly three quarters of an hour after entering Cleddau and crew emerged, 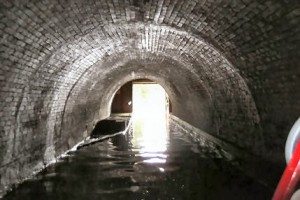 blinking…
A mile from the tunnel is Westport Lake, once a colliery which became flooded in the 1880s. Now it’s a leisure area with a Visitor Centre 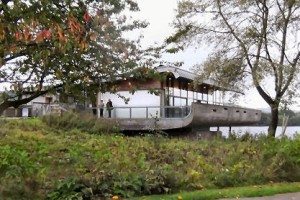 promoting sustainability and wildlife care. There are easy mooring rings here, with permission to stay for 48 hours.
A stroll further along the towpath brings you to:

Plan of action sorted for boat delivery then, just time to photo this building the other side of the road. 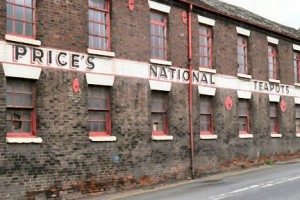 After tomorrow it could be a while before an on board favourite teapot is in use again.. 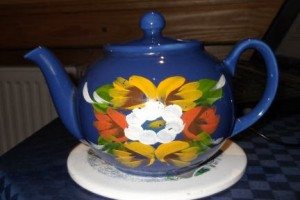 Today: 6¼ miles, 1 lock and the Harecastle Tunnel
Tomorrow: to Longport Wharf to deposit this boat…