Bumbling and Bumping along the Cam

From Ely to Pope’s Corner (from where a left junction takes boaters onto the River Cam) is roughly 4 miles, and from there on it’s a further 12 miles to Cambridge.

out of Ely on a clear bright morning.

There were Dutch barges to pass

and modern road bridges to pass under.

On a hot day the Captain adopted parasol mode

– and wondered why the telegraph poles looked quite so inebriated… 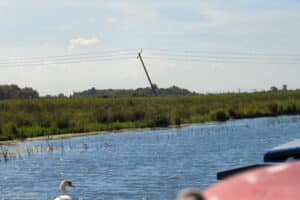 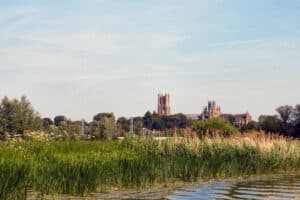 Looking back there was Ely Cathedral as seen from the south. There was not much space left on the Little Thetford GOBA moorings but, no problem, Cleddau was heading further on towards Cambridge.

There’s a marina on Pope’s Corner. On passing the Captain eyed up the cage storing gas cylinder bottles – might there be gas to buy here after the cruise into Cambridge?  The boat has been running on its spare cylinder for several weeks now, a replacement cylinder is top of the boaty shopping list!

Onward: some trees lining the banks,

cattle on both sides of the river, a World War 2 pillbox. 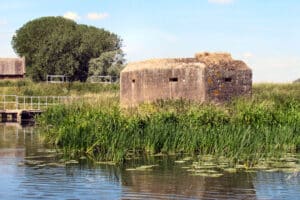 Just after the Five Miles From Anywhere No Hurry Inn

is the first of the 6 Cambridgeshire lodes (“lode” being the medieval world for waterway) which head east into the fens…. 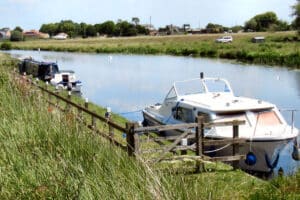 Once the crew of the tiny dayboat had finished their romantic picnic and moved off there was space to moor comfortably, set the table up for an evening meal outside

and make closer acquaintance with the resident ducks!

On towards Cambridge, past moored boats, including this one – now where was it seen before…?

Hitchhikers Guide fans would smile at that…

Another lock onto a lode

Next was Bottisham Lock

– worked from a locked panel box at each end of the lock, with press button controls to operate the vee doors (the lower pair of gates), the slackers (paddles) and the guillotine upper gate. 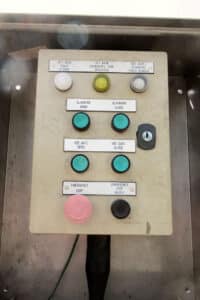 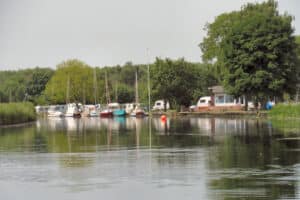 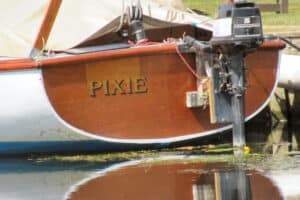 then the Cam Motor Cruising Club, and its pre-war era bungalows. . 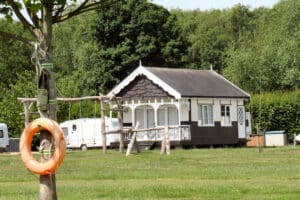 so, taking a gamble, Cleddau moved on during Friday – there was heat, but there was a decent breeze too. However, would there be mooring space at all in Cambridge?

It was at Bait’s Bite Lock that another consideration arose. 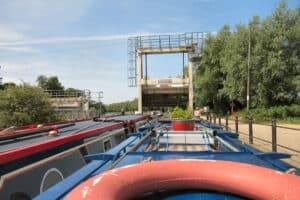 “We should be OK,” said a crew member from a lock-sharing narrow boat. “The first race doesn’t start until 1.15.”

(First race? What was she talking about?)

Once out of the lock the two boats made haste on the final couple of miles into Cambridge.

Under the A14 (see the college name that has long decorated the north-facing side). 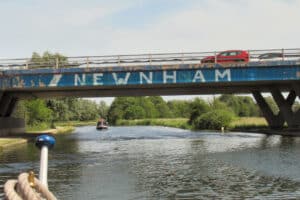 Then at Fen Ditton preparations were being made, marquees and seating, bunting and portaloos.

Was this to do with the Bumping?

The normal rule for boaters to Keep to the Right is suspended here at Fen Ditton.

Then there is a pair of bridges across the river (one foot, one rail) on the outskirts of Chesterton

–  Cheshire Mum used to say a thing or two about the trains here (For the curious see explanation in a previous blog post here: )

the tall chimney of the Museum of Technology, new streamlined apartments

– and then the college boathouses. 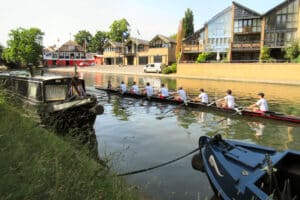 It was about midday, novice crews were on the water 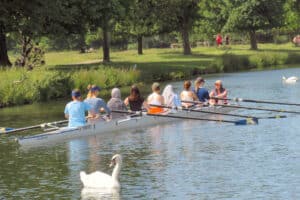 and preparations for Day 3 of the Bumps were already being made.

Onward Cleddau went, note taken of any mooring gaps, making it to Jesus Lock, the current head of navigation… In the sizzling heat long queues were formed outside the Jesus Green Lido; less patient folk, meanwhile, took to the free waters of the Cam. 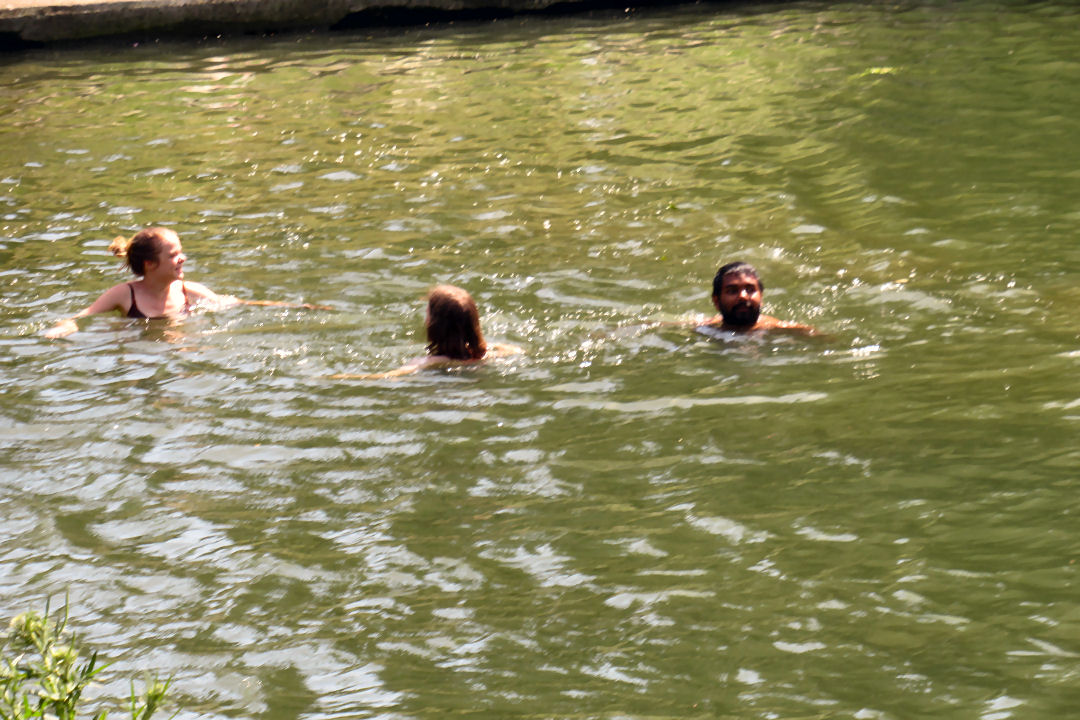 There was a snap decision to make – take that mooring gap there (in full sun, but convenient) or turn and head back towards the parks…

It may have been cooler by the park but for entertainment value Jesus Lock was certainly the place to be.

friends bobbed and swam, locals loitered in the shade, a pair of lovers lay in the sun, swam, and ordered a food delivery, a punter crew left Jesus Lock 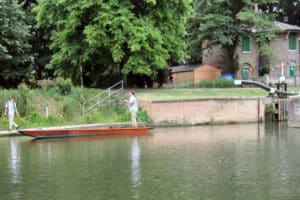 – to return an hour later with ice cream supplies.

The Cambridge world trundled across the Jesus Lock footbridge, while on Jesus Green students gathered to picnic, to party, to make glorious music. 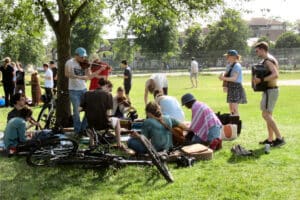 A father fanned the flames while cooking kebabs 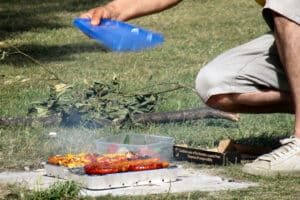 and folk of all ages dangled their feet in the cool waters of the Cam.

On a sweltering day Town and Gown were all drawn to the river.

Downstream on Friday afternoon rowing eights were making their way to assembly points for the Bumps.* 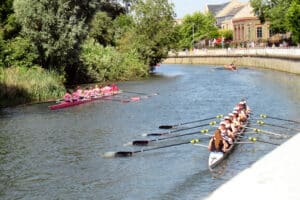 At about 4pm at the Lido an attendant studied his iPad and announced: “No further entries until 6.20.”

Saturday brought hen parties to the city (Three seen). Two parties were identifiable by pale pink or pale green team sashes. (Did a 60 something year old really want to be packed into a punt wearing a’ Mother of the Bride’ sash…?)

Time spent wandering in Cambridge evokes memories from years ago, when the city was within a half hour’s reach by road.

The Art and Craft Market in All Saints Garden

King’s College Chapel (note the banner between the spires of the Chapel) See article here:

See here to find out where the lion is now…

(scene of many, many hours of bicycle counting by ‘Cheshire Mum’ for her GCSE Geography project…)

As for bikes, Cambridge has long been famed for them. There are plenty of the sit up and beg, wicker basket on the front type to be seen,

but the city is also home to child carriers 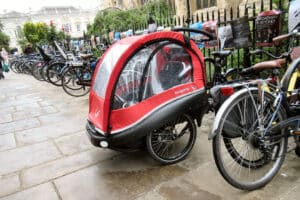 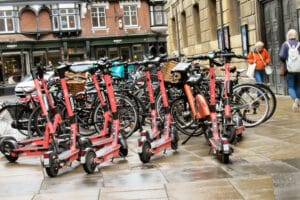 The streets and the footpaths heave with personal wheeled transport. After a couple of days to have not been mown down by one of the above or an electric scooter or an electric motorbike seemed a minor miracle!

It was time up in Cambridge after 48 hours.. The mooring opposite Jesus Lock was vacated – would the next boaters to tie up there see quite so much of life and living as the Cleddau crew had that mid-June weekend…?

Next time: downstream to Pope’s Corner and a left turn onto the Old West River

*For May Bumps results of the University newspaper has published a report – try reading it – you might be wiser, or you might not!

Queries about the Tudor rose: now 9 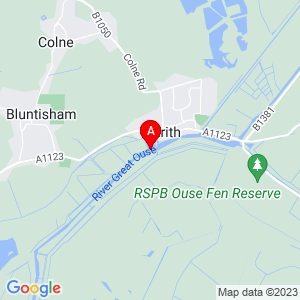