Cambridge, A Dream – and a tempest…

Remember that one hoot of the horn?  (See end of previous post). It indicated Cleddau’s turn to the right, a right turn on hitherto unexplored waters.

First impressions of the River Cam were of a total contrast from the Old West River: the Cam is wide,

it feels deep, in many places there are shady trees on the eastern bank – and the 7mph limit provides real speed opportunities after the snail’s pace of the Old West…

There are larger boats, a WW2 pillbox at the outfall of the Waterbeach Internal Drainage Board,

a pair of sunbathing bananas

Going upstream on the left hand side guillotine gates and locks protect the waters of Reach Lode, Swaffam Lode and Bottisham Lode.

It’s about 6 miles before the first of the Cam’s two locks appears.

This is Bottisham Lock, the place surrounded by shady willow trees.

Armed with the EA key for the control box and a hefty windlass Boatwif set off for the lock. A hire cruiser out from Ely was ahead: “We’re novices,” one said (Australian accent?) “We’ve only done the Lancaster before, and there were no locks on that.” Slowly sense was made of the order in which to operate vee gates, lift gate and slackers… and the chance to lurk in the shade while waiting to use the lock was very welcome…

Onward, passing a weed cutter with climate change adaptation of an umbrella,

past the Cambridge Sailing Club (do those lodges date back to the 1930s?)

and past the Cambridge Motorboat Club. At Clayhithe there was space on the dusty public moorings for an overnight stay.

An early start (to beat the heat) made for an 8am arrival at Baits Bite Lock where there was a constant stream of dog walkers and cyclist commuters crossing the footbridges over the lock and weir. 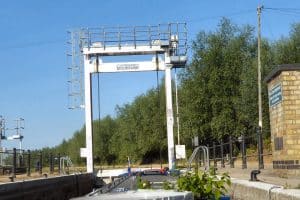 The city suburbs can be reached from here.

Under the A14 – did NEWNHAM get painted on the upstream side as a student prank…?

– and a departure from the usual Rule of the Road. To navigate along on the LEFT felt extremely odd, but it’s to accommodate river craft and college rowing boats.

Slicing across the river comes a railway bridge,

Yes, this was the infamous crossing that Cheshire Mum contended with when for eleven years she worked in Cambridge.

Back came confirmation: It was the 8.30am south-bound, north-bound, south-bound freight train that then reversed back into a siding that you didn’t want to get caught up in!

From here on in to Jesus Lock there are houses,

and parks. There’s a straightforward message on a boat at Chesterton – 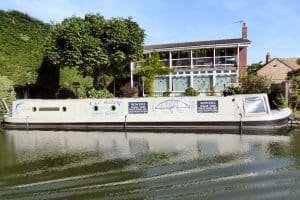 and a bit further on the club and college boathouses start.

A graceful bridge seems to cater separately for pedestrians and cyclists.

Then at Jesus Green, just past the lido

and just below Jesus Lock,

Cleddau had navigated along a previously unvisited waterway! (Note: heat addled the brain so much that there are few photos of the mooring – or of the shaded and shady company that congregated under the trees nearby).

What to do in Cambridge then? The city seethes in summer with visitors from all nations. Smart young men in tailored shorts touted for trade at Magdalen Bridge punt station.

Handily, just up the street is a place to buy punt picnics. But in the Great Heat cool interiors were the way to survive.

Was a first visit to Kettle’s Yard really 30 years ago? The house, originally three cottages, houses the home and collections of art connoisseur Jim Ede.    Every picture and pebble is precisely placed, reflecting the owner’s passion for a wide range of art forms.

His collections are still displayed virtually as he left them in 1973.

There have been some gallery additions since 1970 – and in the newest space right now is an exhibition featuring the work of Anthony Gormley.

It was just two years ago In May 2016, via a Cleddau cruise to Liverpool, that the Anthony Gormley figures were seen at Crosby Beach. There they were vertical; at Kettle’s Yard there are two other figures, one horizontal,

the other, head bowed but upright.

To avoid the heat on Thursday time was spent in the Round Church. 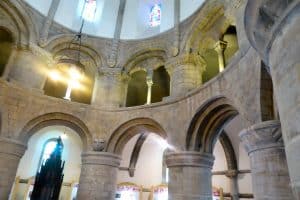 The thick Norman walls keep the building cool and calm. It’s a splendid building, used now as a centre for retelling the history of the city and the development of the university.

Pop in – it’s a fascinating read.

Cambridge Shakespeare Festival posters prompted a thought – even if a college venue was a long walk it could be done from Jesus Lock, surely… But Godmanchester Friend 1 was nearby and a splendid plan evolved. What could be better than being the first entrants into King’s College Fellows’ Gardens and to choose prime seating and picnic position. A large audience (many of them children in fairy costumes or foreign English language students) enjoyed a sparkling performance, the children roaring at the very visual humour of the Mechanicals. The actors each played several parts, except for Puck (Phoebe Hyder) whose sheer physical energy and vocal ability was central to a wonderful outdoor production.

Stage area being investigated during the interval

The return route along the River Cam on Friday was glorious. A GOBA mooring above Bottisham Lock (? Miles from Jesus Lock) provided a good place to tie up before the forecast change in weather.

The afternoon became blustery, a rainstorm seemed to be building. The windows were shut, the hatches and doors closed. And then, a violent squall hit: the boat rocked, tensioners on the canvas cratch snapped, rain drove in onto the front deck – and through two windows, round one porthole and underneath the side hatch. A slam at the back was caused by the wind pushing the steel  slide hatch some four inches along its tracks. Rainwater flooded across the engine boards (12½ litres were pumped out the next day). Outside the river churned and slapped, churned and slapped.  Mopping up was easily done and the drying out was a fairly fast affair. The squall subsided though high winds and tempestuous rains continued throughout the evening. The wind speed at the height of the squall has been estimated at in excess of 60mph.

It was a chance finding late that night on another  boater’s blog that led to the realisation that further downstream progress had stalled. See here.

Bottisham Lock was just a five minute walk along the flood bank.

This is how it looked on Saturday morning. 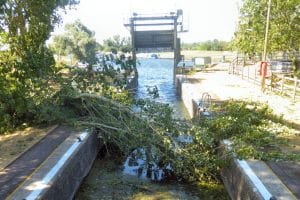 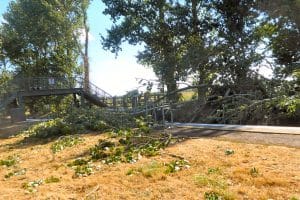 Was Cleddau trapped on the River Cam…?

A walk into the nearby village of Waterbeach passed the time most pleasantly:

on the green was a raised plaque on a plinth,

a poem of a kind celebrating the many facets of Waterbeach’s history.

Waterbeach airfield is recognised by this engraving on the foot of the plinth.

Back at Bottisham Lock later in the day a clearance operation had been mounted by the Environment Agency and two nervous hire boat crews from Ely sought advice. With the experience of Cleddau‘s one (at that point) transit through Bottisham Lock the crew supervised the hire boat crews, who proceeded towards Cambridge in the continuing high winds. 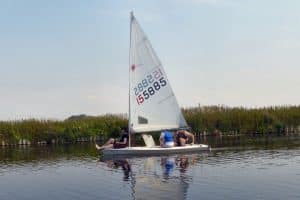 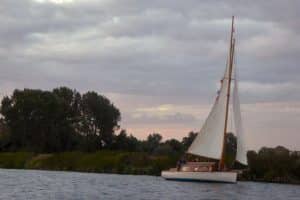 Grit was called for on Sunday – to clobber up in waterproof layers and to face rough conditions… It did involve just one lock and about 10 miles. On open stretches of the river the south westerly blast was very apparent,

although where trees sheltered the waters the wind effect was lessened. (Note: a rain spattered camera lens does not make for good photos…).

Just before Pope’s Corner came a distant glimpse of Ely Cathedral, “the Ship of the Fens”.

Cleddau  was now back on (vaguely) familiar and less tempestuous waters…!