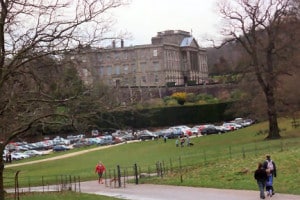 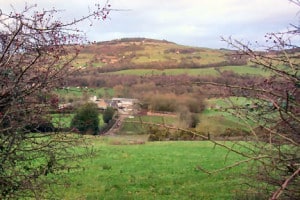 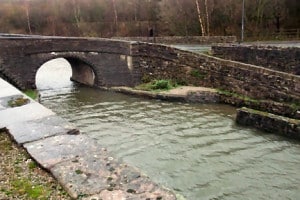 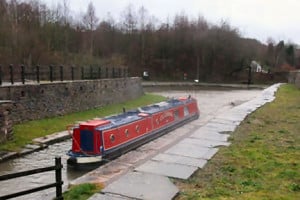 ‘Twas on Boxing Day, after a family walk of a couple of hours up in Lyme Park*, that certain Boat Stuff was off-loaded onto Cleddau, she neatly tied up at her Higher Poynton moorings.

Somehow, amid all the excitement of remembering presents and party wear for the Macclesfield Christmas, loaded into the car too were several additional items: hot water bottles, gaiters, snow mittens, ultra-thick pyjamas and a few stray Christmas decorations, all  just in case the Cleddau crew did feel up to a winter cruise. Mindful of last December’s ice age, options to cruise or not to cruise were left wide open. Farewells were bid on Tuesday morning to the Cheshire Three. It was a mild and dry day as we queued patiently for Tesco to open at 9am. Once stocked up with food for a siege afloat we drove fifteen minutes further on to the boat.

How cold she felt…  The long reverse to the water point was negotiated, watched warily by the towpath anglers, all equipped with bleeping floats on the end of their fishing lines. (Christmas presents from Santa?) Within an hour we were watered, restocked with coal and anti-freeze and then the fire could be lit, the radiators (all seven) turned on, the hatches closed and heating could commence! Soon a pair of Christmas stars, a pine cone and a bauble adorned the curtain poles, while a short strand of fairy lights, a wreath and a miniature tree gave a festive feel to the front end of the boat.

Wednesday dawned bright and dry: there had been no need for the ultra-thick pyjamas – nor the hot water bottles.  Sub-tropical temperatures had been quickly achieved; not even at the end of the bed had there been hostile cold spots. Few other boats were moving along the canal though runners jogged and walkers strode along the muddy towpath. The hedges were thinner than seen before, tree branches barer. To the northwest the tower blocks and steeples of Manchester were visible and plane after plane in swift succession descended to the airport.

A sharp right at Marple Junction, off the Macclesfield and onto the Upper Peak Forest Canal. We turned south towards New Mills and Whaley Bridge, Bugsworth Basins the destination. There was high cloud and a sharp wind but the views across the Goyt Valley are glorious, in whatever season. Kinder Scout skulked in the distance. Odd farms speckle the nearer hillsides, occasional terraces of workers’ cottages are ribbon strands on the far side of the valley. Just before the second lift bridge at Wood End, cold to the core, the crew pulled in and moored up overnight. A warm night on board was had, punctuated though by torrential rains and windy gusts.

Due consideration was given on Thursday morning to crew clothing: an extra fleece here, a warmer scarf there – and the snow mittens for Boatwif’s fingers! In rain, light, then steady, then heavy, then torrential, and in blustery squalls we crept on past the Meltis factory at New Mills, past the pretty moorings at Furness Vale and on to Bugsworth. Last Easter we had jostled to find a mooring among the sixty odd boats of the North Cheshire Cruising Club: now just two unattended boats rocked on long-term moorings. The wind ripped along the channel, the boat bucking, it seemed, on the rippling waves!  We chose our space, in the upper basin just below the Navigation Inn, in shelter, we thought. Later came calamity.  A crash and a bang… the chimney coolie hat had blown off.   In retrieving and securing it with chain and padlocks the Captain, aided by a head torch, lost his specs. Try hunting in lashing rain and absolute darkness for a near invisible item which could have plunged to the bottom of the canal. Found they were, upturned, caught neatly on the gunwale.

Surrounded by hills and the sharp stone sides of the mooring basins TV reception is unobtainable. Yet via dongle gadgetry and BBC iplayer the Captain has permitted the season’s highlight. Two episodes viewed so far, one to go, Boatwif’s cold expectations transformed by Great Expectations…

That brings us to Friday. Too wet and wild for hill walking – so why not take a trip on a train? See Part 2 in a couple of days’ time to find out where to.

And for any readers this side of 2012, enjoy your New Year celebrations and our very best wishes for 2012.

*Lyme Park, the country estate of the Legh family, was gifted in the 1930s to the good folk of Stockport. Later it became a National Trust property, its lake gaining fame in the 1995 BBC production of Pride and Prejudice.  Remember Darcy’s swim…?