Moored on Stratford Riverside: 3.5 miles, 1 lock
Not an original thought but surely to be bored in Stratford is to be bored of life. It is no surprise to hear a multiplicity of languages in the heart of England but yet it never ceases to amaze. By mid-morning Tour Guide Stratford was under way. There was the mass of South Koreans streaming into Henley Street to Shakespeare’s Birthplace; there was the party of Italians posing for a group photograph and there was another long stream of orange-rucksacked youths on the opposite side of Bancroft Basin (nationality unknown). Back in the town a gaggle of excited boys plus a teacher was being led through the streets by a guide in Elizabethan dress: his white ruff and black pantaloon suit looked barely out of place at all.
The regenerated Royal Shakespeare Company Theatres makes a spectacular success of attracting visitors. Wander in at will, browse in the gift shop, take tea on the terrace – but look about as well as the glorious space is used for exhibitions. Currently in the Swan Foyer and the gallery above the entrance are displayed various costumes from recent productions. Surrounded by cardboard boxes and hampers were costumes such as these:
this one, modelled on a Coronation dress, used in the 2012 Merry Wives of Windsor 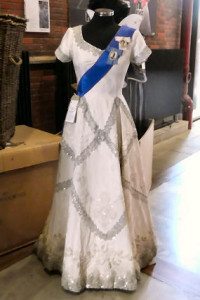 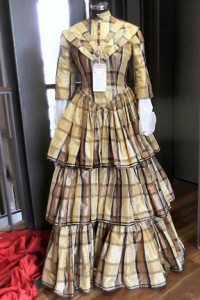 and this grouping : (Midsummer Night’s Dream, the Orphan of Zhao and Written on the Heart) 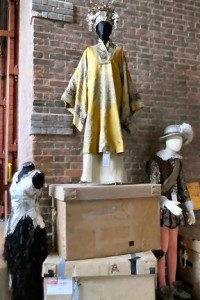 There is another  visual feast  in a little arcade near the centre of town. This is the result of a community art project, Titania, made entirely out of recycled materials. 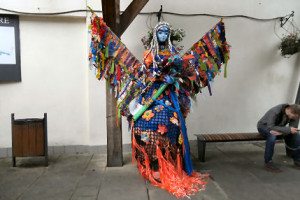 Forty eight hours after arrival in Bancroft Basin Cleddau had to be moved on.  The wide lock down onto the river takes two boats abreast. 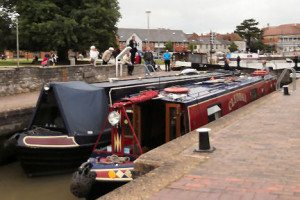 There was a discussion as to who should go first and which direction should be taken. The other boat was turning right, Cleddau left, upstream, to the limit of navigation on the Upper Avon.
“So are you a completist?” enquired the other steerer. There was a splutter and a mumble, and gradually it dawned that perhaps the crew of this boat is mildly obsessive about going as far as you can. Wasn’t that why the May trip on the Shropshire Union had to go to the canal’s start /end at Ellesmere Port?
A difficulty of moving an 18 ton narrow boat in these parts was reinforced pretty quickly; just under the Tramway Bridge is a boat hire station. The river weaves and wends frequently in the first half mile or so. Trip boats that travel fast, little motor boats that cause a lot of wash, novice rowers who can’t see where they are going, the broadbeam hotel trip boat that ploughs along, regardless of anything else on its course – all made for a trip where a front deck lookout was essential! 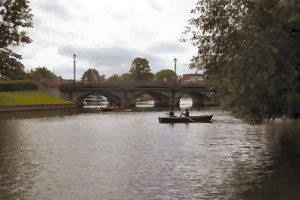 Housing beyond the town bridges is large, in well-sized gardens. 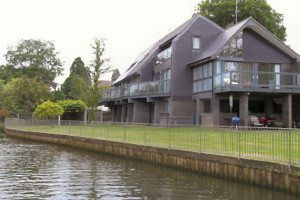 The cow parsley is pretty tall in these parts: 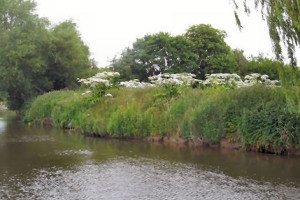 Then there is a large caravan and chalet park. The river narrows and a turn was made, nose firmly into the reeds. 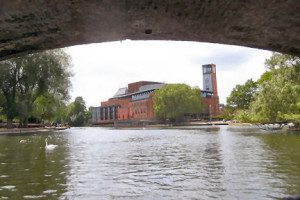 and by mid afternoon was moored at the near end of the park, a handy location for a night out at the Swan Theatre! 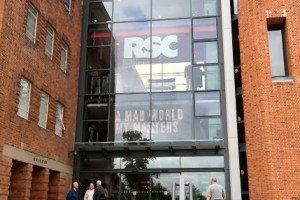 Tomorrow: back onto the Stratford Canal to a temporary mooring for four nights at Valley Wharf…