Every now and again, as if for the first ever time, the Captain makes an observation along the lines of “it’s only when you’re travelling this slowly along the canals do you realise how much infra structure this country has…” He said it on Thursday, while gazing at the multitude of pylons and power lines near Hawkesbury Junction 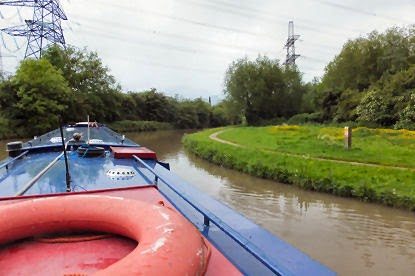 and not far from the M69 motorway bridge. Railway lines and trains are constant companions

and near Barby by the M45.  The North Oxford makes its slow way through Warwickshire into Northamptonshire. Quite often these lovely bridges

reveal the 1830s updating of the original canal route when about 15 miles of twists and turns were straightened out. (Nineteenth century infra structure!)
As Coventry was receding on Thursday morning

it became apparent that Cleddau had company. There were boats ahead – and boats behind. After taking on water it took an age it seemed to get back on the move. (Think trying to join a main road from a minor road and all the other drivers ignoring your signals.) “Where are they all coming from?” exclaimed the Captain.
“Where are they all coming from?” questioned a moorer near Brinklow.

– and he seemed to have no prospect of moving forward at all.

No-one knew, apart from a rumour that there had been a hold-up – somewhere…
To be part of a procession could be jolly, intentional. To be part of a relentless slow moving queue is soulless and so at All Oaks Wood a mooring was found.

“Really, you’re like a (Boatwif had expected the word ‘snail’) caterpillar crawling through the countryside with your house on your back,” a towpath walker had remarked back at Tamworth a few days ago. Mmm, the words “crawling”, “countryside” and “house” all apply. “Countryside” in these parts is muddy

It was while moored at All Oaks Wood that the comms crisis occurred: Boatwif inadvertently leaned back against the trailing charging wire of the iphone which was plugged into a 12 volt socket. There was a distinct Snap! sound – and the iphone was no longer receiving its life-blood. The spare cable wasn’t functioning… a replacement was vital. What luck that a well stocked 24 hour Tesco was a few miles further on at Rugby on Friday morning.
Newbold-on-Avon, just west of Rugby, has a tunnel which used to be prettily lit; now just a few of the blue and purple lights seem to operate.

– though saw no scrums or tries today!

Onwards to Hillmorton and the three paired narrow locks. Here convoys of boats from above and below were homing in on the bottom locks.

A Volunteer Lockkeeper took charge of the situation.

“Close the gate first,” he bellowed at a novice, “unless, young man, you intend to drain all the water out of MY canal.”  There was something of the sergeant major about his manner, but happily accidents and collisions were avoided.

It is at Hillmorton that locklines are engraved either side of the middle locks’ top gates,

(They were installed in 2012 to commemorate the inaugural year of Canal and River Trust.)
Within an hour the M45 had been crawled under and a mooring found.