Coventry, its cathedrals and canal 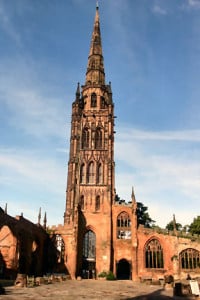 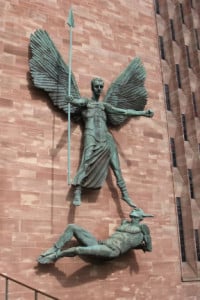 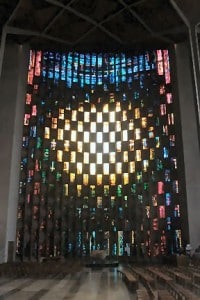 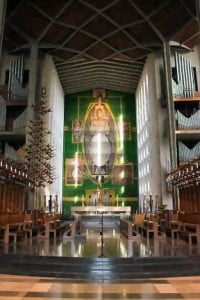 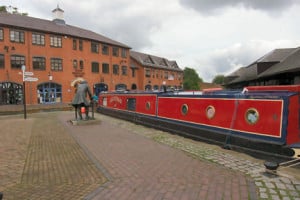 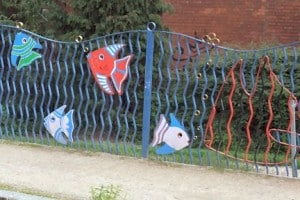 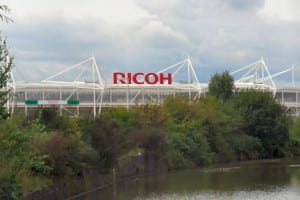 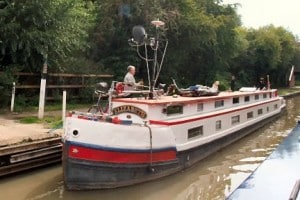 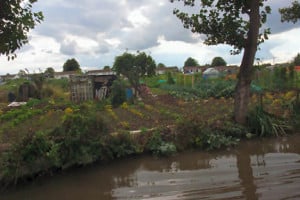 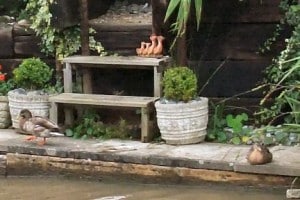 Friday 27th August: Coventry to Hartshill, near Atherstone: 14.35 miles, 0 locks
I woke in the night – because it wasn’t raining any more! Nor has it since – and it is easier to see and to think when not under a peaked hat and encased in waterproofs!
We set off for the Cathedral early, crossing the ring road by a high footbridge and heading uphill. Up a cobblestone lane we reached the distinctive front of Sir Basil Spence’s 1960’s cathedral and the steps to the fire-bombed St Michael’s Cathedral. The vast space is open to the skies but overseen by the remaining tall cathedral tower (third highest in England after Salisbury and Norwich). Inside the tower base we found the most helpful ever Tourist Information Centre: not only had they sent us map and leaflet by first class post but also today provided a personalised gallop through Coventry’s history and its three not two cathedrals. (No 1 went in the Dissolution; No 2 in 1940.) Oh, and “being sent to Coventry” may have originated in being sent to one of the many monastic orders in Coventry to learn the vows of silence… I’d been once before to the new cathedral, as a young teenager. The space, the colours, the Baptistry Window, the etched glass, the strong imagery had remained with me. There were friendly greetings and helpful directions; until an hour later we were almost the only visitors. The theme and work of reconciliation pervades the art, the gifts from other nations, the prayers and the exhibitions. A wonderful experience.
Our departure coincided with the arrival of a mass Australian contingent: indeed we got the impression that most visitors come by the coach load!
A little time then was spent in town, busy by midday, but it was an opportunity to pick up essentials. We returned to the boat, safely guarded by Mr Brindley’s statue and made a far more elegant departure from the Basin than we had arrival. We gazed at the Coventry Arm on our journey outbound, this time not through rain-splodged spectacles but through sunglasses. 39 works of art are sited along or nearby the Coventry Greenway: we spotted more this time but still felt a sadness that you have to seek the art under the graffiti. There are metal pieces, sculptures, information boards and  murals: some show signs of weathering but most signs of disrespect. We passed the Nicoh Stadium, catching up with Elizabeth, an old workboat converted to a holiday boat in 1936. But what about the wildlife? Birds there are; ducks there are but no swans (not the right sort of weed?) Fishermen / boys aplenty – the first was building up to a rant about his just scattered bait so I talked of consideration between all users and he softened visibly; two boys were just setting up. ” Good luck, hope you catch something ,” came from the helm.  “We will,” was their tart reply.   But next angler on was pulling out a minute tench – so there is life in the grim and grimy waters.  After an hour and three quarters we were back in familiar territory, at Hawkesbury Junction, the Greyhound pub this time a sea of happy outside drinkers, and we passed the old distinctive Engine House. We headed north, past Bedworth and Nuneaton, past spoil heaps and granite quarries, neat gardens  (see pretend ducks and real ducks) and allotments.  All we craved was a sunlit mooring out of earshot of the railway. Mission (moreorless) achieved!
Now only two miles from Atherstone Top Lock (flight of eleven),  heading for Pooley Hall or Alvecote for tomorrow night.