Dawdling down the Thames

The lithe and curvaceous Thames twists and turns her way

from near Lechlade in Gloucestershire, through Oxfordshire, Berkshire, Buckinghamshire and Surrey towards and through London, and on out to the North Sea.

When boating along the Thames it’s hard to retain a sense of compass direction: wooded hillsides, meandering curves, the criss-cross of bridges and the distraction of extraordinary riverside properties mean distances and even locations become vague. If it’s early morning and the helm grabs a peaked cap to shield the eyes then you know that at that point you’re heading east… Other than that London is downstream and Oxford upstream…

Cleddau and Tentatrice tied up in (ouch, expensive) Henley-on-Thames on Sunday and Monday evenings to ride out the expected gales. The properties near Henley Bridge seem very familiar, 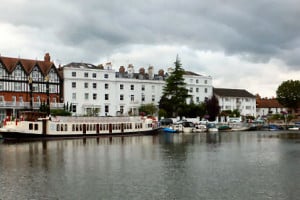 frequently seen on postcards, prints and jigsaws. Both when walking past and cruising past the white buildings a strange sensation was evoked: could this be possibly Tenby-by-the-Thames…? It’s a place of boats and trippers, ice creams and restaurants, browsers – and, it must be reported, an award –winning independent bookshop. 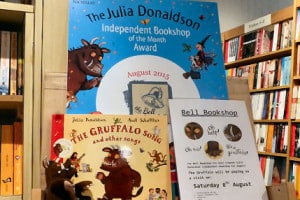 Henley is famed for its Annual Royal Regatta. Just see the mooring prices, normally £10 per night or £55 per week, but in Regatta Week (1st -5th July this year) the charge is £30 per night Monday to Thursday, £40 per night Friday to Sunday… or £200 for Regatta Week. “The town becomes a hive of activity as the bunting-clad streets heave with men in coloured blazers and women in pretty summer dresses, the car parks fill up and trains packed with thousands of visitors arrive.” That’s the official town guide describing Regatta Week.

When you cruise up the racing course (Tuesday morning) you begin to get a sense of the scale of the Regatta. 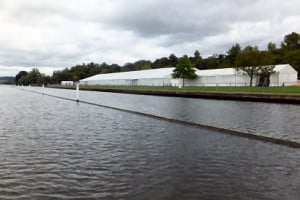 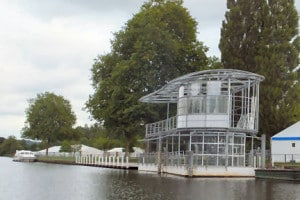 remained to make you realise what a massive and prestigious event this is. Initiated in 1839 the Regatta is now 176 years old – and not likely to be discontinued!

Immediately past Henley Bridge was this property

– its gables and cornicing providing suitable eye candy for Farrow and Ball. Eye appeal is important on all riverside properties. 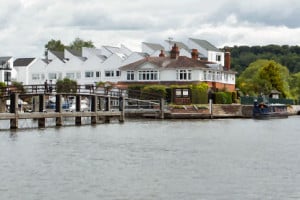 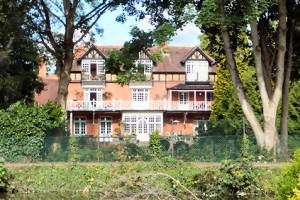 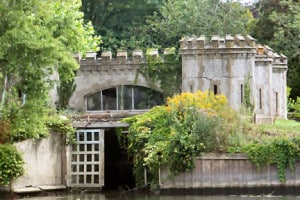 – but yet there is little that is cohesive between one property and neighbouring ones. 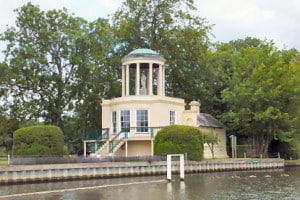 at the end of the 1 mile and 550 yard Henley racing course. Very early on the Sunday before the Regatta the Henley Classic endurance swim starts here – over a 2.1 km distance. It’s a sporting town sure enough, but according to its Official Guide a town of Youth, Music, Drama and Literary festivals too. 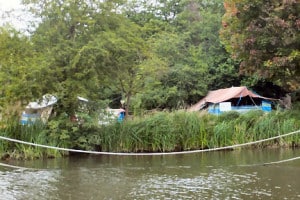 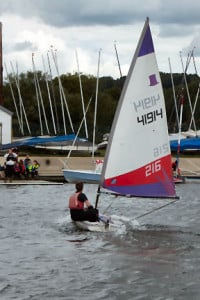 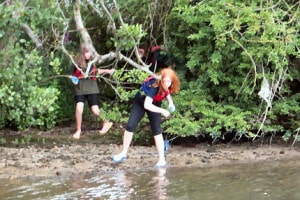 By mid-afternoon the flotilla had achieved its target for the day: 13 miles, and 5 locks, (one deemed “Self Serve” where aided and abetted by some cheerful Californians** downward passage was eventually achieved). 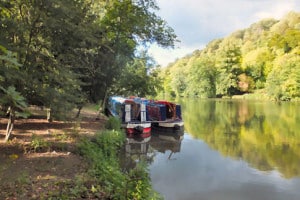 where the screech of owls and the scuffle of wildlife penetrated the still darkness.

no lockkeeper, no other descending boats, no spectators. 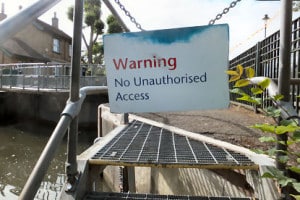 So a plan had to be hatched: tie both boats together, 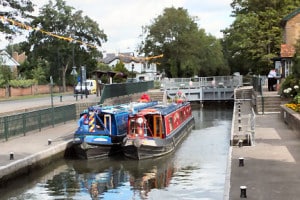 Boatwif to operate gate and sluice controls and then return down the slimy steps to the boat. Mission achieved, there was just the slightest regret of having just two hours previously put on clean trousers!

Somehow, it seemed, the further east and closer to London one gets the more extravagant the properties. 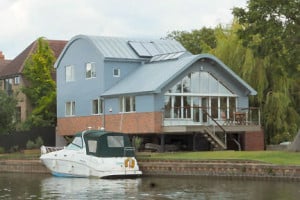 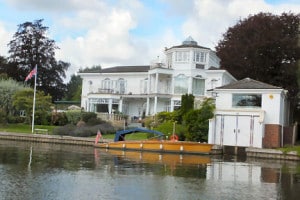 Bigger too are the trip boats.

Under the M4, past the female lead in The Scottish Play,

to Boveney Lock, the last before Windsor.  Smile! There is a wry memory from this lock: nearly twenty years ago Cleddau had been passing downstream when there was a hail from another boat. “Are you from Pembrokeshire,” a female voice shrieked.

“Well, yes!” was the honest reply.

“Whereabouts?” the voice called back.

“Well I’m from Munk-tun!” came back on the breeze – and the boats slid further and further away from each other… So from that exchange just a mile from Windsor was born the term Monkton Moment*. 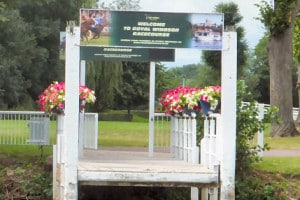 the long stretch of the Crown Estate, two more locks and then arrival at Runnymede.

Ignore the aircraft overhead from nearby Heathrow (4.9 road miles away), ignore the cars whizzing along the A308 – just make the most of this mooring. 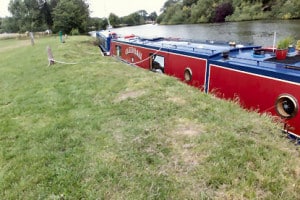 Then, on Thursday, after a Runnymede exploring day, came Visitors. So whose legs were these…? 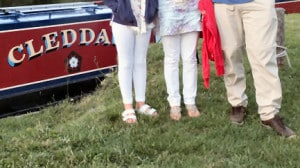 Onward on Friday to Weybridge and the River Wey.

** Californians, from a Danish town near Santa Barbara, the 8 and 10 year old children being home-schooled.