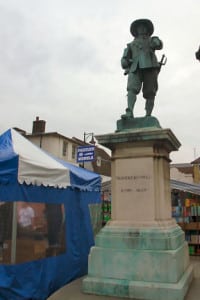 From Brownshill Staunch Lock (near Earith) to Godmanchester
Miles travelled: 11.75
Locks: 3
Last night I was reminded that I needed to refer to Ken’s departure from the Ely Marina yesterday: surrounded by fibre glass boats, two tight turns and gusting winds it was pronounced “perfect” by an onlooker from an adjacent boat.
What a peaceful mooring we had – no traffic, no trains and the only noise that roused us this morning was a sort of mooing dialogue going on between nearby young cows!  Then the gravel works started its conveyer belt at 7.30, a distant clatter above the lock and along the conveyor over the waterway.
We sped along, past Holywell, past two well-known waterside pubs, Cleddau seeming to enjoy the deep water. She had been built for the Trent and performs well on deeper rivers.
Then arrival at St Ives – and overwhelming nostalgia hit. For over five years it had been our nearest town; there was the town quay, occupied by tribes of mums and toddlers feeding the swans. There was first one, then a second, gracious spire above the rooftops. There was the bridge with the chapel in the centre; there even was the same rather quaint little department store still doing brisk trade.  The Greek Cypriot restaurant near the bridge seems to have metamorphosed into “Surf and Turf” but much else was the same. Monday has an extensive and bustling street market, the stalls layered three deep in some places, and presiding over it still is Oliver Cromwell, whose own town of birth, Huntingdon, was far too Royalist to support calls for a statue
of such a well known non-conformist.
On past the Hemingfords towards Huntingdon. There are frequent surprise views of graceful spires across large water meadows  or in picture postcard villages.  An exception is the bankside church at Hemingford Grey, where the tower was blown down in 1741,  a legend claiming that the Devil flew off with the steeple. At Houghton Lock more memories: views across the vast water meadows of winter-time floods.  And the landing stage, now solidly built, fit for purpose, forever engrained in some readers’ memories as the place of a Pathfinder emergency. Below Wyton more boats – and even caravans – are moored. We approached noisy Huntingdon, headed under the old town bridge and under the newer A14 road bridge, following the water towards Godmanchester, where we were to join two old friends, for a Chinese supper on board.  Their enthusiasm for tracking us down is legion: their last boat visit was in September in Shropshire, previous ones being  at Oxford, at Leighton Buzzard … and others. But here we were to be moored less than a mile from their house…
And then CLUNK,  a quiet clunk, but ominous. Power, but no propulsion. Poles used to punt us towards the bank.  Nettles, ropes, engine inspection. Diagnosis: a split centreflex coupling.  Hopeful solution, early delivery of critical part to our friends’ address and a call out engineer to fit it. What a jam, what will tomorrow bring? And the other jam? Well, Nan ariived mid-afternoon, bearing scones and grape jam, made from our own bumper grape harvest last Autumn! We sat on the stone steps, drinking tea, eating scones and jam.  Later we enjoyed the Chinese supper together, so that part of the plan worked out.
I’ll let you know about the rest…