Down the Macc and through the Harecastle…

“There’s always something to do on a boat…”  Hear that observation accompanied by a sigh and you’ll recognise that the workload on a boat can prove onerous. Often though the Captain says it with glee, briskly even – there are amendments to be made, jobs to be done, projects to be completed… And, last weekend, with the boating season about to start, there were a couple of front deck improvements to be made.

Getting the boat in the best position to carry out the jobs was the first requirement. But the simple task of turning the boat to make the bow easier and safer to work on provided the first hiccup…

“Ready?” came the call from the stern.

Boatwif untied the bow rope and stood on the pontoon awaiting push off from the back end. There was a yelp from the Captain. “The horn, the horn!” It was missing from its mounting. Quickly he retrieved it from its winter storage position in the cabin and mounted it on the roof, then retreated to the stern deck and pressed the horn button. Would the horn sound? No. No.  No.  Fiddling with the roof top connections brought no success either.

Sorting the horn out then would be the first task, ahead of the two planned jobs…

The boat turn went ahead (south past The Trading Post for a quarter of a mile, a smooth turn in a wide winding hole and a return to the pontoon).

The Captain brought the horn into the cabin.  First task: identify the problem. Was the wiring working? Fiddle, fiddle. The horn was plugged in to a 12 volt plug socket to be tested. Then positive and negative leads touched and a fuse blew. Was this a fuse in the plug socket – or was it in a potentially inaccessible position behind the wood trim. “I might have to strip all this out,” humphed the Captain, making a sweeping gesture at the cabin’s wood interior… An old song swam to mind. “There’s a hole in my bucket, dear Liza, dear Liza…”  Do you remember it? Where had all this talk of stripping out the cabin lining come from when the jobs on the task sheet were the installation of another T stud on the port gunwale and the attachment of another fender to the bow…!

Good luck prevailed: the blown fuse was positioned behind the switch, the horn was repaired and the other jobs could begin.

They went well, by all accounts. The additional T stud

should make tying up rather easier (shame about the drill bit though that fell into the water) but the hugely heavy additional V-bow fender should give greater protection to the front of the boat.

So when did the cruising start? Sunday.

Away from the mooring and down past The Trading Post where Comet, the little day boat, has been having some TLC.

On this now so familiar cruising route down the Macclesfield Canal it’s the things that are different that draw the comments. This canal is known for its delightfully proportioned stone and roving bridges: yet here, at the northern end, flat platform bridges that can be made higher on the stone support pillars show that the canal is passing through what was once coal mining territory.

When Cleddau last passed this way just four weeks ago  the hills were white covered and the café inside Bollington’s Clarence Mill provided a good hot lunch. On Sunday though it was warm enough for al fresco lunches;

daffodils were in full bloom 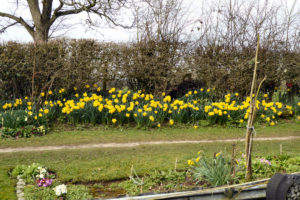 and there were splashes of forsythia

brightening up the hedges. Trees might still be extending gnarled leafless fingers against the sky

– but at ground level a prized crocus gained a photographer’s attention.

Though spring is in the air several horses were still blanketed against the winter chill.

All year round on the Macc you can see and hear the Canada geese. They live in tight flocks, swimming, grazing and patrolling en masse. In these March days, however, pairs of Canada geese seemed attentive only of each other

and not at all interested in others of their species.

Human activity during the five months since Cleddau last cruised this canal is evident. At Macclesfield Wharf, opposite the recently installed visitor pontoons, buildings have been demolished and land cleared, the site now due for development as a care home facility.

Further along, just before the Oakgrove Swing Bridge,

the small roadside property, empty for so long, is having an extension built. Maybe it’s destined for an old lady with a large family since in the garden is a very large shoe! 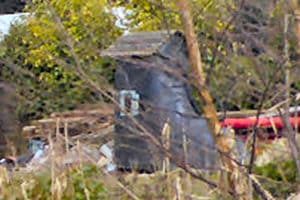 Two miles further on is the start of the Bosley lock flight. Many of the lock gates have been “yarn bombed”, that is, they’ve gained adornments, crocheted flower heads in various colours.

And at the bottom of the flight, very near the Dane Aqueduct,

a new seat has been positioned, with a fine view from it along the canal and across to the steep hill that is The Cloud.

Onwards towards Congleton, progress periodically slowed by Cleddau acting as a cow-catcher. The canal water is a soup of windblown tree branches and decaying vegetation which collects under the bow. As if in foreign parts some signs on boaters’ sheds near Ramsdell Hall railings warn of crocodiles and kangaroos, while one boater’s American travels had obviously taken him way out west!

To Scholar Green – a line of offices and business units is undergoing a significant transformation.

It’s a line of residential units now, though the garden space will be very limited. Will pleasant canal side space be created from the rubble-stashed edge…?

Then, just past Bridge 91, a puzzle was sighted – a puzzle in the “What’s that and what’s it for?” category.

What is being measured /monitored by the solar panel and for whom…?

So, at the outset of the Cleddau “Summer Cruise” (always wary about using that phrase) the first three nights along the Macc, were each spent on or near an aqueduct, one at Gurnett Aqueduct, the second near the Dane Aqueduct at Bosley Bottom and the third at Red Bull Aqueduct.

Wednesday: Today the rejuvenated horn was in full use, one long warning blast at Red Bull as the boat turned sharp left, a single blast at Hardings Wood Junction

on the sharp right turn towards Harecastle Tunnel – and a horn demo to the tunnel keeper at Harecastle before the plunge into the blackness of the 2,926 yard long  tunnel.

A mile or so south of the tunnel lies Westport Lake, a watery oasis in Stoke-on-Trent, a delightful place for a Staffordshire oatcake lunch 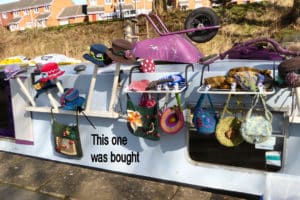 (Onwards on Thursday through Stoke-on-Trent towards Stone, the ultimate cruise destination being Gloucester and Sharpness).