Down the stairs to Chester

Beeston to Chester, 10 miles, 8 locks
Saturday – what, no wind? No rain? The sun really shining…?  Beeston Castle seemed to be shimmering this morning on top of its rocky outcrop. 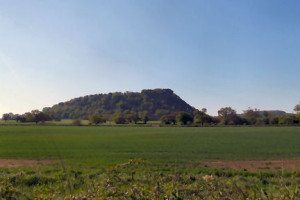 There were seven miles of Shropshire Union Canal ahead before any locks; a decision as to whether to tie up for a lazy day or proceed on down into Chester would be made en route.
For the past two days thermally-lined hats have been rammed on heads and secured by chin straps; yet early today it was sun hats that were being called for. Summer had decided to make a return visit: butterflies fluttered over the towpath; ducklings and cygnets were perfecting their swimming; walkers and joggers were displaying bare arms; a young girl and boy strolled by, she concentrating on her ice-cream, he on his lollipop. Folk were fishing, strolling, cruising in canoes or open boats

and a marquee was readied for a 70th birthday celebration. 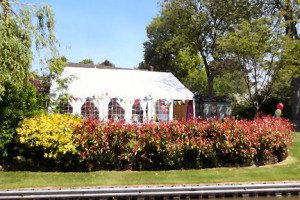 For about an hour Cleddaumoved at just above tickover speed past mile after mile of moored boats. Owners seemed to lavish huge care on the tiny plots beside their moorings.

After the moored boats came smart suburbia, each property with a conservatory 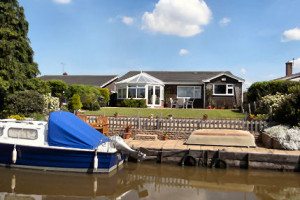 and a well-tended garden, one with its own boathouse.

Conditions were calm, benign. On then to Chester. The locks are broad locks, the gates are heavy and the paddles require effort and muscle. Good news at the first lock – another boat (nb Where The Heart Is) would wait at the second one so that boats and crews could share the onward locks. The city encroached: tall towers, revitalised warehouses, 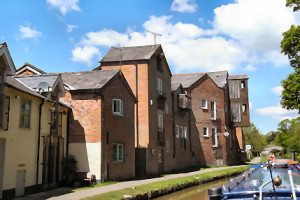 Then came the city walls, rock hewn through by Romans, 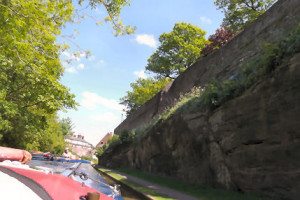 extended by the Saxons, a huge tourist attraction today. There were voices and waves from high above. 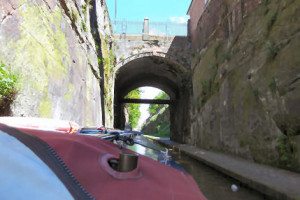 Five locks done, only three to go, but what a three – the Northgate Staircase.

Thankfully the lock partners were boaters from the Leeds and Liverpool Canal who have met a few arrangements like this…
The words on the sign were read, digested, checked. It took a while to empty the lower and middle chambers so that the boats could start their descent. Down they came, a drop of 33 feet (10 metres). 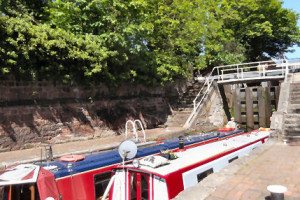 There was a swing to the right, under yet another bridge to Tower Wharf. “Don’t moor near the pub,” had been the earlier advice, “it gets pretty noisy.” 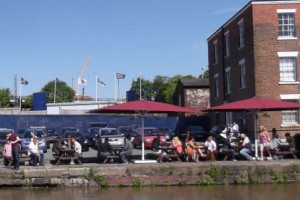 The basin was full so a towpath mooring was found a little further on. Boatwif sneaked out later to investigate the locks from the Wharf down to the River Dee. 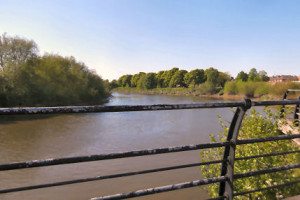 To think this river runs to the sea…
It was a hot day (and, shh, the fire was allowed to go out on the stove). This evening’s mooring is peaceful, but in shadow, the temperature plummeting. While birds sing a noisy evensong the Captain is relighting the stove with the lavender kindling kindly donated by the Academic. She knows who she is!
Tomorrow: onward to the Destination, the Waterways Museum at Ellesmere Port…