Down to Liverpool Docks

“Where are yer going?”

So often along the Leeds and Liverpool Canal that question has been asked – and when the reply is “Liverpool,” the response is always: “Oh, yer’ll lurve it there.”

On Sunday there was a short distance move (of less than three miles) from Lydiat to Melling, the last safe place in the countryside before the urban sprawl of Liverpool begins. A long stretch of fishermen

(no female participants here) were competing in the Liverpool Memorial Angling Match.

Thing is, cruising into Liverpool is not quite as straightforward as some would think. On Sunday an open little cruiser battled its way past the push bridge at Melling, determined to keep going, regardless that within a mile the next swing bridge, and the one after that, could only be opened by Canal and River Trust staff, and that by booked arrangement.

Timing was crucial, to be at the Handcock’s Swing Bridge for 0915 (C&RT operated),

The canal swoops in two great loops, the first one past Aintree, where there was just a glimpse of the race course.

The second loop heads out towards the coast, 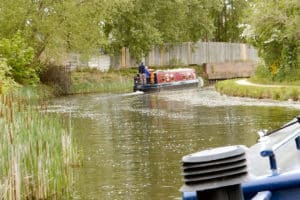 Crosby and Bootle being names which appear on the canal map.

A swan exposed eggs in a nest, 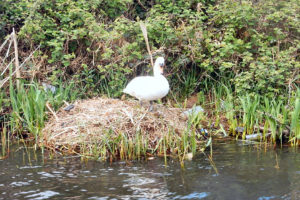 a coot floated by on an island home 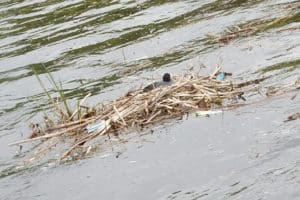 while Canada geese in several places were busy with their broods. Often houses backing onto the towpath used decking to utilise the waterside space.

There was time to notice that the housing estates are from different eras and the towpath scene less litter-strewn than might be the case elsewhere…    Spotted, however, in the mostly very clear water (and then in a stretch of densely black water) were the usual urban litter culprits of plastic bottles, a wooden pallet, a traffic cone and some polystyrene packaging.

The city boundary was getting closer. To the right/ to the west were the docks (extending, since learned, for seven miles along the banks of the Mersey). With half an hour to spare before the C&RT lock liaison the convoy had passed scrap yards, defunct industry

and then, a sharp right angle turn took the canal to the top of the Stanley Locks.

It was time to don the life jackets.

Ahead loomed the Tobacco Warehouse, 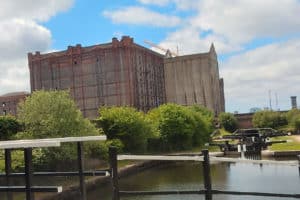 the largest ever brick built warehouse in the world.

“Go straight ahead,” was the C&RT advice. “At the Victoria Clock Tower bear left…” 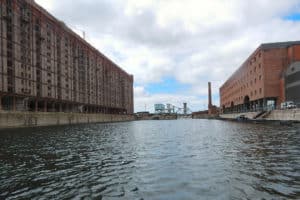 There seemed to be a lot of open water …

but a Welsh flag fluttering to the left

seemed to be a good luck symbol! In the distance was the tower (one of only two with six clock faces, the other is in Russia). 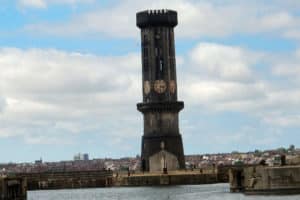 Then in front of the clock tower was the left bearing, heading for a narrow channel ahead. 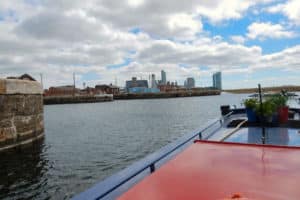 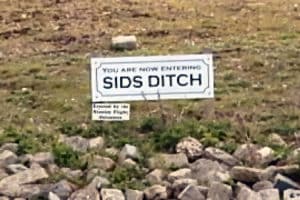 a vital element of the new Liverpool Link. The route to the designated moorings goes through the channel (only a bund separating the channel from the River Mersey) 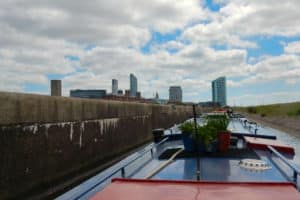 towards newer buildings – and at last to a first sighting of the Liver Building.

(where lock side boathooks were deployed 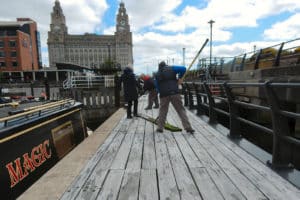 Down through the lock – to the first of the three Liverpool Link Tunnels. 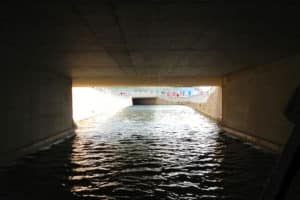 The navigational challenge was not yet over, for next came the tidal lock at Man Island  – but no sign of the C&RT escorts.

Out of the lock – where next…? There needed to be an n shaped swoop through Canning Dock 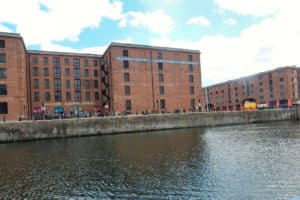 and one last u shaped swoop to enter Salthouse Dock.

There ahead were the narrow boat moorings

– and Cleddau’s reserved space on the far left end.

The day’s cruise had taken about six hours and what an exhilarating experience it was. Liverpool is a boating destination well worth coming to – here rests Cleddau on a luxury mooring

with a tap two feet away, free electricity, rubbish collected daily between 0800 and 0900 – and a Tourist Information Centre a four minute walk away.

Now for some serious  sight-seeing…