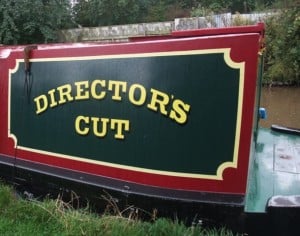 Near Nuneaton to near Alvecote, 10 miles and 11 locks

Though frequently breezy and sometimes squally the force of the wind has been nowhere near as fierce as yesterday. The boating focus had to be to enter – and leave – the Atherstone 11 lock flight on one and the same day. The top few are close together near the town, the lower ones more spread out within quiet countryside, the flight stretching over about a mile and a half. To keep the Coventry summit and the Ashby Canal in water British Waterways currently are preventing any entry of the locks after midday and padlocking them top and bottom at 4pm. So, in, out – and no stopping to browse or shop… a pity, since there is a tempting sign mentioning a historic Georgian market town.  Maybe next time Cleddau passes this way Boatwif will be allowed to jump ship for a little while!

The locks typically are slow to fill, fast to empty. During the three and a half hours it took to move down the flight a wide variety of weather was experienced, from warm sunshine to sharp showers to wind squalls to calm moments, and so on. Boaters in both directions were cheerful, glad that it was not cold – or so windy!

Once down the flight the countryside is peaceful, with just the occasional fast train interruption. Polesworth hoves into view, a flag flying from the tower of Polesworth Abbey. A decision to moor early was welcomed: it was that or three more hours to reach the other side of Tamworth. So a towpath walk was taken and a diversion into the Pooley Fields Nature Reserve right beside the towpath. What were old colliery workings is now a network of paths round various pools through trees and ferns.

Several boat names caught the eye today: the owner of Ying Tong, used to sing the song to keep spirits up when travelling through long tunnels; we passed Piston Broke (Perhaps Boatwif would have asked for an autograph had the owners been about, since she reads their blog and marvelled at their determination last year to “stretch” their boat). Then there was Nan’s Gamp (?) and Isaiah Grut (who?) and Random Similar (someone interested in mathematical concepts?) Was the Director’s Cut paid for from a financial bonus – or does the name reflect a film editing suite? All too perplexing.

Late afternoon there was another cough of showers from the clouds.  A rainbow appeared: no sign of a pot of gold beneath it, just a watery canal, hopefully leading us tomorrow to Fradley Junction, where we shall turn right – and be on new waters, the eastern Trent and Mersey Canal, cruised once by the Captain, never by Boatwif.