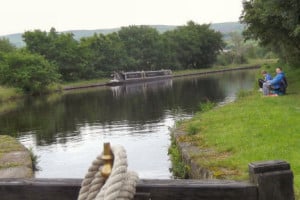 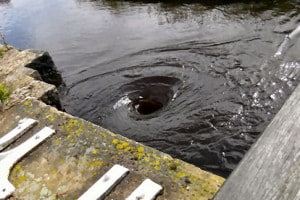 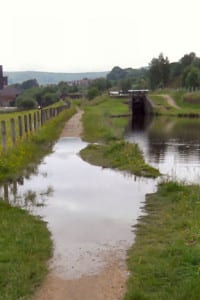 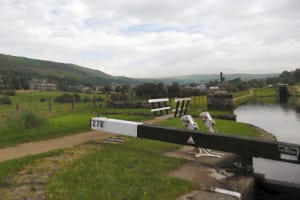 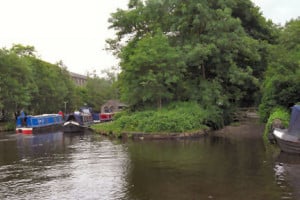 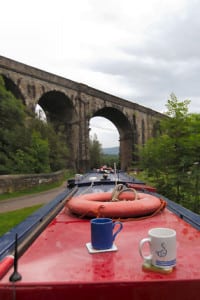 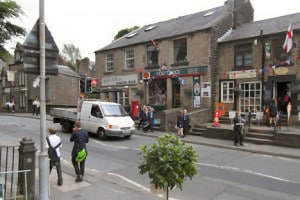 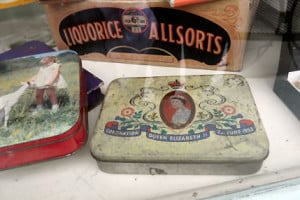 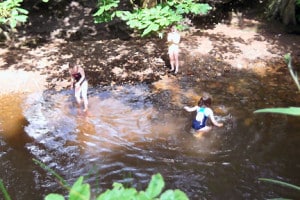 Cleddau has cruised nowhere else quite like the Upper Tame Valley:  the land folds around in a great bowl shape so the eye can feast on a  panorama, taking in slopes and hamlets, ridges and  railway line, meadows and marshes, mills and the white flashes of lock gates, paddle gear and lock bridges descending the valley.  For the first mile or so the wide view allows you to see the occasional distant bus travelling between villages, horses in a paddock, a terrace of houses, the constant trains on the track above. Just ten locks sport the white paired paddles on the off-side and it is only the top few where the ferocious down pull of water forms a noisy vortex. Water was plentiful today; huge amounts still working its way off the Pennine tops after recent rains. Between Locks 29W and 28W the tow path was so under water that Boatwif was relieved to have worn the sturdy walking boots rather than the preferred colander-effect boat boots! After Lock 25W the valley begins to narrow – greenery obscures the canal ahead and the huge viaduct by Lock 23W comes as a surprise. From the emptiness of Diggle above, where conversational opportunity is rare, suddenly there are other people – and other boats… at the Transhipment Warehouse services area this morning two boats were moored up on visitor moorings, while two others were queuing to pass by and move on up towards the tunnel  – and there was a short sharp shower. It was just less than a mile and a further two locks down to Uppermill, another two boats already moored outside the Saddleworth Museum. Cleddau was moored opposite them, under a little less leaf cover but on a muddier tow path, the day’s journey over.

The boats opposite are travelling companions and being short enough at 55 and 56 feet respectively accessed the Huddersfield Narrow via the broad-locked Calder and Hebble Navigation. “Breasted up” they had been, the term given to two boats tied side to side to travel as one. Also on the opposite bank is a flock of Canada geese, as usual behaving in a collective manner: one in the water, all in the water; one climbs out to strut about, all others follow!

Into Uppermill, the Captain prepared for the promised bookshop browse. Open it was this time, small, packed with second hand volumes, all in good condition, a rather different experience from the Slaithwaite shop last week. Along the street a sweet shop displayed confectionery containers from sixty years ago (and hopefully not sixty year old edibles!) Just after three o’clock buses disgorged secondary school pupils at the bus station; suddenly this sleepy little village was awash with girls and boys diving into sweet shops and mini-markets, desperate for their afternoon calorie rush! On then to a Pharmacy, Boatwif to parade her midge bites. Perhaps midges think she is a Boatwif-No-Friends so swarm to caress her neck and head and jaws and wrists…  Pharmacy patients backed away, the healthcare assistant tutted sympathetically “Ooh, that is bad,” and the café waitress (glass of water for the antihistamine tablet) urged: “Oh, I do hope you feel better from your bites soon.”

Parts of the Midlands have been deluged by floods today but here, this afternoon, it remained mostly dry – and warm enough for three little girls to laugh and squeal and jump about in the river just a few feet upstream of the stepping stones. Yes, definitely heading back downhill towards the conurbations of Stalybridge and Ashton-under-Lyne, but thankfully, not there yet!

Tomorrow: either remain in Uppermill or work seven further locks downhill to Mossley.