Downhill to the River Nene

A bit of observation from the towpath during Wednesday’s rain day at Blisworth suggested that boats would be able to turn round by Blisworth Tunnel Boats – a time benefit to both Cleddau and Tentatrice if return trips through the Blisworth Tunnel could be avoided. Overnight an email from Les Biggs reinforced the point: there’s a winding hole there, he said. Thanks, Les.
Crew members made odd forays out during the rains, Boatwif as ever with a camera in her pocket.
Who would not photograph the lovely Tudor Cottage

– or these well aged gravestones 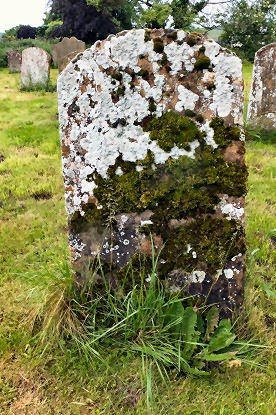 or the Tunnel entrance.

Thursday 5th June:
Breezy but sunny, just right for an early start. On board Tentatrice on Wednesday night the plan was hatched: boats to be turned, Boatwif to collect newspapers from the village shop, Relief Mate from Tentatrice to walk the dog, then take a pause at Gayton Junction for boat services before the great descent.
And thus it was…
Less than a mile from Gayton Junction the Rothersthorpe Locks start

– 17 narrow locks down to Northampton. 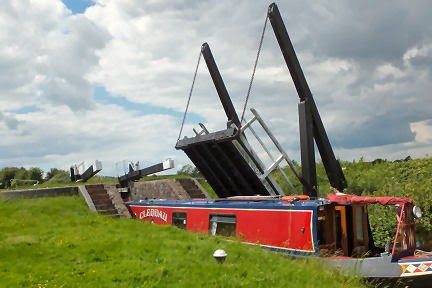 The top 13 come in quick succession. How the Cleddau crew yearned for some help from the Cheshire One whose gate pushing skills are impressive these days…
Cleddau in the lead, Tentatrice in the rear.

Approaching boaters passed on news: “Lovely river, had to wait at Oundle for eight days though because of the strong stream…”
A few locks later came an identical tale.
A pair of figures came as a surprise. 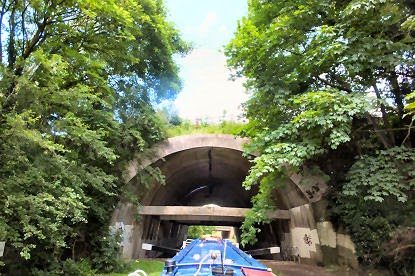 At Lock 13 was a fount of all knowledge.

She wound our paddles, transmitted on her walkie talkie and spoke of Bedford, of pubs, of Wicken Fen, the Cam, the Wash and now her expedition to the Thames for the Lee and Stort and then upstream to Lechlade.
Traffic roar receded. There was birdsong, magpies darting through tree branches, rustling reeds,

lapping water and early water lilies as the canal stretched on towards the river.

Then came a first glimpse of Northampton’s landmark, the lift testing tower.

New houses are under construction

– is there a price premium for these canal side homes?
River-like the canal wove on. Then traffic intruded again as the town drew nearer.

There was one last lock, clogged with weed. Walkers (new parents and a sleeping babe) begged to assist. Down Cleddau went, onto the River Nene. Carlsberg is big hereabouts.

Under the stone South Bridge,

pulling in at the yellow footbridge.

Northampton, Morrisons, we are here!

For those deprived of Monkton Moments* there are two fleeting incidents to report:
At Buckby Bottom Lock on Monday: (approaching boater) “Are you from that part of the world?”
His back deck partner, gesticulated with her thumb: “ ‘Is Mum llives in Llangwm.”
On Thursday afternoon, in a jostle for mooring space here at Northampton, the single handed boater coming upstream not only declared he came from Fishguard but also donated Danish pasties and a croissant to each boat, surplus apparently from his sister’s cafe!