The Captain had spent the winter planning an around England cruise. Leaving Bristol marked the start of Phase 3 of the trip, it beginning with another booked start to a day’s cruise.

Tentatrice’s Captain had liaised with Bristol’s Harbour Master, requesting a bridge swing at Prince Street across a narrow section of the Floating Harbour. The Harbour Master travels by boat of course.

Off-loaded, the guys donned hi-vis vests and hard hats, then swung the bridge.

Very quickly a crowd of pedestrians and cyclists gathered at the bridge, eager to cross the harbour.

Still in the Floating Harbour the boats cruised past old quays, 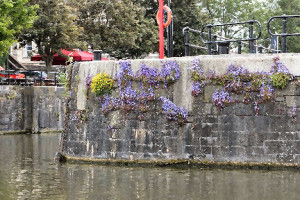 and warehouses brought back to new usage. A hammock on a balcony

Once through the flood lock at Netham

the river becomes a rural corridor.

Boater facilities are hard to locate on this navigation: at  Hanham Lock there was much marching about, searching for bins and trying of padlocks at what might have been a rubbish skip compound (but wasn’t).  Impatient skippers abandoned their shore-bound crew

The locks are big

beside them remind of another River Avon, the waterway from Stratford to Tewkesbury.

Counties: Cheshire, Staffordshire, Worcestershire, Gloucestershire, Avon… Boatwif often feels compelled to know which county she is in – and here at Saltford Lock it seems that the boat was cruising now in north Somerset…

Three hours after setting out the gloom had become rain, not ideal conditions for operating unfamiliar locks. (This is The Swan beside Swineford Lock).

On the approaches to Bath is a small marina

(a really good place to leave the boat?)  – but its visitor pontoons inconveniently take boats no longer than 35 feet.

Puzzled about this remark? A Cleddau summer cruise has again been subject to OfSTED sabotage.  A phone call received at Sharpness had informed the Captain of a summons to meet the school’s HMI back in Bedfordshire. Granted there had been six days notice, two of which were to be spent on tidal waters. Obvious solution: moor up in a marina on the Kennet and Avon – except of the 7 marinas contacted 6 had no room or berthed only shorter boats… Hence since Bristol there was to be full speed ahead (as fast as one can do full speed on a river and then on a very crowded canal). It was while musing on how pleasant it would be to secure a few days safe mooring at Bath that this pinkest of boats was passed, called of course, Lily the Pink.

Visitors by road to Bath (UNESCO World Heritage Site)  can delight in spectacular views as they approach the city.  If, however, you arrive from the River Avon the views are of uninteresting bridges

and sites under construction.

Where to tie up overnight was the thing – somewhere, apparently there were moorings near Sainsbury’s, at river level, before the six locks. Eventually in beating rain the boats were tied up beside a low wall and metal railings.

But this was Bath – a place of great visual delight.

Undeterred by the vertical wet stuff Boatwif established that the bus station was close by and that the start of the nightly Bizarre Bath Comedy Walk was a mere 15 minutes stroll away.

It wasn’t the first time (the third, actually) of joining this evening event

– but it was just as funny. And it was a good dry way to end a pretty damp sort of day!

Next time: Crowded on the K & A