Drop of brandy, anyone?

Way back in the summer months brandy glasses became an issue on nb Cleddau. Somewhere along the Staffs and Worcs Canal in early June the Captain smashed a brandy glass, not deliberately you must understand, but accidentally. The glass leapt, it would seem, from a shelf to the floor. The liquid (for there was some) was soon mopped up and the fragments of glass (there were many) were swept up. The glass shattered far and wide: one shard was retrieved days later from the galley floor and another, having pierced Boatif’s forefinger, remains there still, embedded in the flesh.

“We must try to replace that brandy glass,” the Captain urged.

Easier said than done. The Staffs and Worcs Canal is renowned for its rural beauty as it stretches south westwards from Great Haywood in Staffordshire to Stourport-on-Severn. Shopping opportunities are few and far between – but when you are boating your shopping list is dominated by the banal (milk, bread) rather than by the desire for only occasionally used glassware.

In due course Cleddau arrived in Worcester  and was moored up on the river beside the racecourse. With time to spare before continuing up the Worcester and Birmingham Canal to the 200th birthday celebration at Lansdowne Park there was opportunity to browse the city shops. Perhaps here would be a chance to purchase a replacement brandy glass…

Have you any idea how hard it is to find a brandy glass these days…? No luck at all in the city centre shops, no luck in T K Max nor Debenhams. No luck either in  Argos or  Marks and Spencer (well, unless you wanted to pay £30 for a set of four very large brandy glasses).

The conclusion reached, after a thorough perusal of all the shops, was that brandy glasses were a thing of the past.

The following night Cleddau was moored on the canal just above the lock alongside the Commandery.

“Why not go and see if there’s a shop nearby for some milk and a paper in the morning?” the Captain suggested.  It was mid-evening, but not yet dark. Yes, back on the street that led down from the cathedral and out of town was a small newspaper shop, closed at that time of night but very convenient for the morning.

Two shops nearer though was a shop that was open, a small antique shop

– and there inside was a set of 5 dainty brandy glasses, each glass a different colour. Boatwif, sent out on a recce for a newspaper shop, had no money with her. “Those glasses, they’re lovely, they’re small, just what we need on a narrow boat, but only two of them …” Boatwif remembers blurting. The obliging owner agreed to split the set and sell just two glasses. Back at the boat the Captain was dispatched post haste (with wallet) to the shop owner to secure the deal. What a triumph, two pretty little brandy glasses, one red, one blue, (boat colours!) purchased in Worcester at 9 o’ clock at night.

The thought occurred over the next couple of days that it would be a good thing to have bought the other three glasses as well. Several return trips were made to the shop, but the sign was always the same: “Open some evenings and often at weekends.” It seemed to be a sort of play shop or hobby shop…

Nothing tried, nothing gained. Coming back past the Commandery

and within a few steps of those shops on the Monday morning Boatwif posted a note under the shop door, along with a mobile number. And that night Larry, the shop owner, rang: “Fine,” he said, “I’ll keep the rest until you can collect.” It would be a while before the Cleddau crew could be back in Worcester: there was the Severn to do, the K and A, time on the Thames, the Wey, the Thames again, the route back north to Cheshire…

Six months passed, filled with boating and then Californian adventures.

Then southbound on the M5 en route to Pembrokeshire for a pre-Christmas visit signs for Worcester were spotted.

Down on the west coast of Wales it was impossible not to make comparisons with the so recently visited west coast of the USA. Here was the Cleddau Bridge on a grey December day,

was certainly wilder than the Pacific surf, 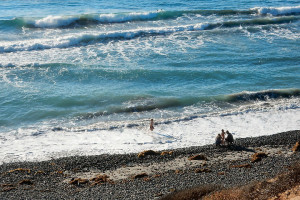 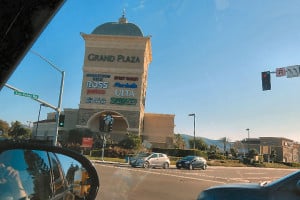 A flick through the phone contacts list brought up Larry’s Worcester number. Make a call when within range of Worcester perhaps…

At about 1130 on Sunday morning  (20th December) Boatwif rang. There was no reply – it was a long shot of course. Was the business still there…? Maybe on the Sunday before Christmas Larry might be at a pre-Christmas drinks party – may as well leave a voicemail message anyway…

“Er, you probably won’t remember this but way back in June we were on a narrow boat and we bought two brandy glasses from you and then we asked you to keep the others…”

Ten minutes later the phone rang. It was Larry. “You rang my number?”

The story was repeated.

“You’re coming past Worcester? Where are you now?”

“Approaching Monmouth. We must be about 40 minutes away… But we came by boat last time. No idea where to park.”

What a man – he remembered the transaction, then provided excellent road and parking directions. There he was, on the Sunday before Christmas, sweeping the pavement outside his shop. The interior looked just the same, and, as if the first purchase had been only a couple of days ago he handed over the three glasses, carefully packed inside a shoebox.

There was a brief exchange about the rest of the summer’s cruise: Sharpness, Bristol, the Thames and the rest – though no mention was made of the demise of the dainty blue glass, victim one night of the Tentatrice boat dog’s very waggy tail!

So, readers, if you should raise a glass (brandy or otherwise!) over the New Year festivities remember that there are many decent folk in this world.  Cheers and good wishes to you all.

(And if health and water levels are favourable the crews of Cleddau and Tentatrice will be cruising on Cleddau on the Upper Peak Forest Canal.  It’s not a secret that at least one member of each crew is partial to a drop of brandy – so the Worcester glasses might be used after all!)