Dropping down from Stoke to Stone

Thanks to Techno Son-in-Law for posting the previous blog post.  Boatwif’s laptop has taken a serious (terminal?) dislike to Blogger software……….

The newly installed Beta 43 engine was meant to bring peace of mind and anxiety-free cruising. Breakdowns and mechanical problems were to be mere nightmares from the past… Hence, a rhythmic loud ticking noise noticed while southbound on the Macc did not exactly inspire confidence that all was well below the engine boards.
The route south passes Longport Wharf 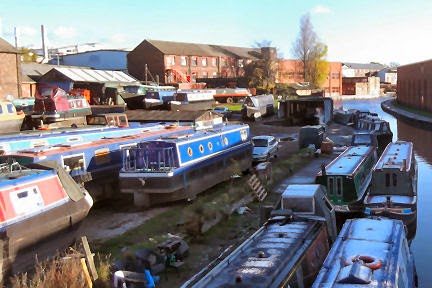 and after a pleasant overnight mooring at Westport Lake Cleddau was back at Stoke Boats early on Monday morning. There was a quick diagnosis (drive belts had worked loose on the alternator) but the cure took a time. The engine needed to cool, the belts needed changing, the emergency spares were the wrong sort, replacements had to be sourced – but, once arrived, they took a bare ten minutes to fit, test and pronounce fit for travel.

What do you do when moored up in Stoke-on-Trent, unable to move? The Captain did engine room projects and succeeded in fitting the digital marine VHF radio. A call to a coastguard wafted through the cabin at one point. Boatwif, for her part, battled unsuccessfully with Blogger software and spent several hours on an on-going sewing project. Meanwhile, in the covered dock Emperor Ming was being polished and polished and polished, 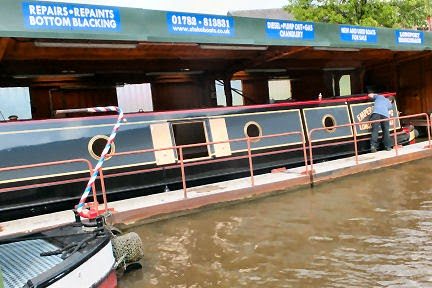 preparation for her appearance at the Crick Boat Show this coming weekend. Seven hours passed – then at 4pm Cleddauwas free to go.

To start a journey so late in the day is unusual, but needs must. From Longport Wharf the canal weaves through wide waters, past industrial decay 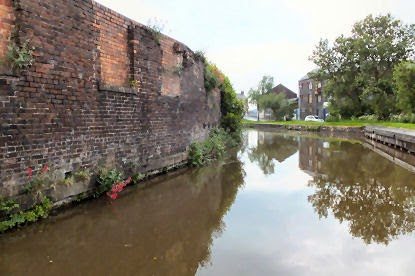 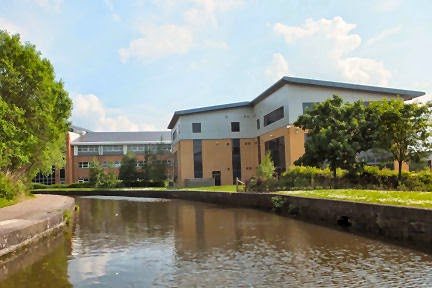 After a couple of miles the canal reaches Etruria where the Stoke Locks start.

as Cleddau cruised quietly out towards Britannia Stadium 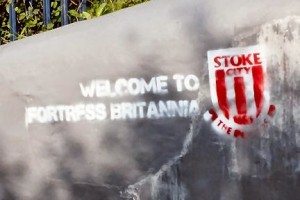 and on towards the city boundary. Sixth and last lock of the day was Trentham.

Moor here near Bridge 104 and you can walk up to the Wedgewood Visitor Centre at Barlaston or find your way a mile west to the delightful Trentham Gardens, Garden Centre and adventure playground… It was a hot night but apart from the occasional train there was just birdsong and a few placid cows for company.
To Aston, to Aston Marina – 5½ miles, 9 locks – that was the mission for Tuesday. A marina mooring had been booked to allow for a trip back home. Through Barlaston, memorable for weeping willows and pretty houses.

Down the four Meaford Locks, usefully spaced to allow lock operators to walk between them. Half a mile further on it’s welcome to Stone 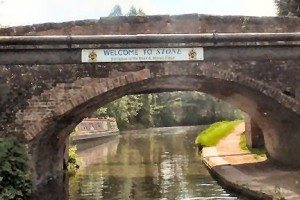 – and a further four locks through the town. This town revels in its canal links and in its train links too. Here a garden is equipped with a signal box and railway signal. 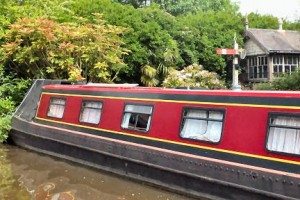 There’s another signal further on at a boatyard. At the bottom lock take your pick – the Starpub has outside tables on one side of the lock and a restaurant has tables on the other!
About a mile further on is Little Stoke and then, beside Aston Lock is a mile marker 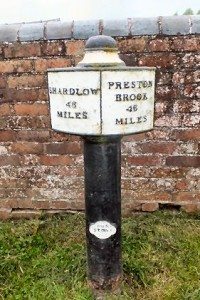 – so this is just about the half way point along the Trent and Mersey Canal, between Shardlow (near the East Midlands Airport and Derby) and Preston Brook (Cheshire).
Not far at all below Aston Lock is Aston Marina.

You know how you come to prefer particular car parks over others, maybe because the parking bays are easy to line up in, the lighting is good, the payment system is straightforward…You can have a tick list for a marina too. Modern marinas tend to provide pontoon access alongside each moored boat, well placed rope loops or bollards for tying on to, easy access to water and usually an option on paying for hook up to electricity. Here at Aston all the above prevail – and more! Like many places where there is open space the wind can bedevil even the most adept of boat handlers. The Captain made a creditable effort at backing towards the A14 pontoon when a sharp wind pushed further the boat back towards the marina entrance!

Aston Marina has made itself a destination for road users too. The grounds are dotted with seats and some large ornaments. 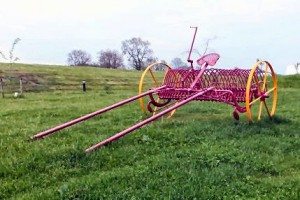 Tuesday night is Gourmet Burger night and on Tuesday evening security guards were hovering in the car park beside a car whose engine was running… Was there a celebrity engaging in some form of secretive burger bingeing just a few yards away?
There was a planned return home on Wednesday for a Thursday meeting; what was not planned was the phone message yesterday, essentially “Come home quick, Captain, OfSTED’s calling…”

The cruise is due to continue on Saturday, heading for Braunston, there to liaise with Nb Tentatrice and her crew.