Cleddau had arrived in Ely on a Sunday. Unusually, especially on a summer weekend, there were plenty of mooring spaces. Where were the gleaming white cruisers that cluster in front of the restaurants and along the waterfront? Maybe Friday’s tempest and Saturday’s gales had deterred the usual flotillas…

The boat was tied up at about midday far enough away from any potential pub noise – and a mere few paces from the Jubilee Gardens. At 2.30pm music struck up…

Another Sunday afternoon, another band concert …

Huddled under the attractive bandstand in Jubilee Park was the Waterbeach Brass Band.

Whereas the St Ives audience on the previous Sunday was perhaps a hundred strong, the Ely crowd probably peaked at a couple of dozen.

Windproofs and umbrellas were in evidence, not the sunhats of a week before. It was a spirited performance – and at the interval break while the band members reached for their flasks of coffee, Boatwif retreated to the boat to make a flask of tea – and there wasn’t an ice-cream in sight!

Occasionally family groups and tour parties would stroll along the weaving eel-like paths of the lovely park.

At the riverside a tour guide, in deliberately slow delivery, explained the history of the Isle of Ely to a group of Russian language students.

The band played the second half of its programme in valiant spirit.

The Waterbeach Brass Band A board was slammed down twice by the wind,

music sheets blew from the stands and the jacket of the euphonium soloist flapped in the breeze.

If there are no urgent tasks to perform then Ely is a great place to walk about, to look, to observe.  Small bronze eel plaques set within the pavements

mark a heritage trail around the historic sites of the city. 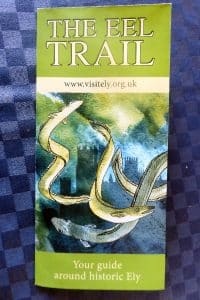 There are the eel paths in the park and the 3 metre high galvanised steel eel sculpture.

There is the intricate stonework on the vast cathedral.

Look up and see pinnacles

Look round and see sculptures.

Look through the windows of the High Street bookshop and see the Octagon.

– and the delightful gardens beyond.

A cannon on Palace Green was captured at Sebastopol during the Crimean War (if you look carefully you can spot the Cyrillic writing). 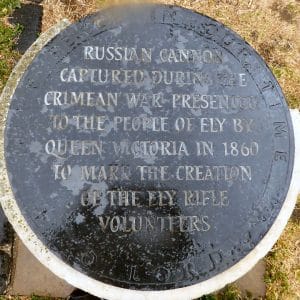 Down on the riverside there is always activity to watch: unusual boats,

A transfer out of Ely on Tuesday was necessary to meet the strict 48 hour only mooring rules. Cleddau ploughed a few miles north to Littleport, passing the spanking new Cambridge University Boathouse    –

and tied up just beyond the little town on the Station Road EA moorings.

“Where do you usually moor?” asked a narrow boater who had come to help haul the boat into the bank against a tricky offshore wind.  “We’ve seen you on the river over the last few weeks…”

And then a ping on the phone announced a surprise text. “We are in Ely this afternoon. Ringing at 4.30 – will you have gone by then?”  It was the Stafford Campanologists

on their annual Welsh Colleges cycling, camping and bell-ringing tour. A car makes swift work of the distance between Ely and Littleport. Met often before along the canals of the north west – and as recently as early May  – it was most unexpected to coincide with them in East Anglia.  Stretham, West Lynn, March, Ely, Peterborough – several church towers to be rung at were names familiar from the 2018 navigation route!

Back to Ely on Wednesday, to moor the boat in a marina before further family events. 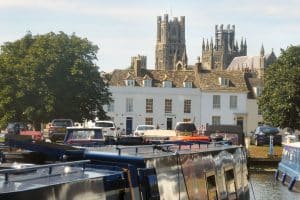 You know, there have been worse evening views from the front deck of the boat…!