End of the fifth leg

Wedgewood to Festival Marina, Stoke-on-Trent: 5½ miles, 6 locks
On a gloriously sunny morning the monotonous high-pitched sound of contractors strimming grass along the towpath urged a departure!
Just the other side of the bridge hole there is a full view of the Wedgewood factory

(local notices call it the Wedgewood Estate).  Then it was soon round the corner to Trentham Lock.  Information boards back in Stone warn of the need for an anti-vandalism key here and an oncoming boater had been advised not to moor overnight in these parts. All looks benign; a trip from hereabouts to Trentham Gardens nearby is on a future To Do list so some research will need to be done…
Do you ever get a “Doom Feeling”, you know the sort of nervous anxiety that something unfortunate may happen…? Such was the experience this morning – there was an occasional squealing from one or more of the drive belts (sometimes this happens when the washing machine is operating but this wasn’t the case today) and from the rudder came an ominous rattle. The Captain, however, reassured that the rattle noise was cavitation, an effect caused by shallow water. As the boat drew closer to Stoke the noise died away as the water deepened. The squealing too seemed to disappear.
There are three garden surprises to report: in the first was a pair of Belisha beacons.

Remember them?  Does anyone know of any not yet replaced by pedestrian crossings?
In a small urban garden a sheep and a goat were facing each other off.

Another eye-catching moment was this, more balcony than garden

and the eye barely registered the house!
As for Stoke landmarks so far: well there’s the enormous grey wall in the distance (a Sainsbury’s distribution centre), the incinerator,

a pair of bottle kilns 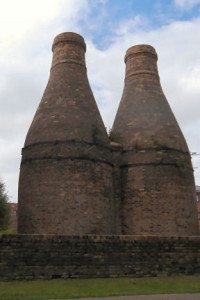 and the Etruscan Bone and Flint Mill.

(Apologies to football fans – missed the Stoke City Stadium.)
In Stone the other day two bicycles with panniers had been seen, safely locked to a post. What was unusual on each was the white number suspended from the frame. Today various cyclists (on white numbered bikes) whizzed past: “Cycling holiday,” one person called.

Ah, cyclists!  It’s a few miles between Trentham Lock and the Stoke Locks. Several cycling groups passed, plus a tandem,

and two jogging parents being paced by their cycling children…

One of the locks has the railway running just behind the lock tail. The bridge is low (a boat approach brings you eyeball to eyeball with roosting pigeons).

Overheard from a cyclist going down the towpath here: “Ooh, this isn’t a very good cycling path.” Horses first, railway second, other users later…!
And so to the upper two of the Stoke locks: they are deep and the force of water when the locks are being filled is pretty fierce. Here the last lock gate is being closed.

Up rises the boat to Etruria Junction, the main line continuing on the Trent and Mersey Canal but to the right is access to the Caldon Canal. How long has this insect been here?

Not half a mile further on is the entrance to the Festival Marina, formed from the redeveloped National Garden Site created for the 1986 Garden Festival.

That’s it for a while, it’s Cheshire One duty next week but the final four days back to home moorings should be early in September. In the meanwhile, should you see Cleddau out and about near Stoke, Harecastle or the Caldon Canal, she should be in the capable hands (hopefully) of Techno Son-in-Law and the Physicist…