It was a Spring jaunt to Lincolnshire, a week of re-acquainting selves with faces and places from a long ago past…

Who cannot be stirred by the sight of the vast Lincoln Cathedral presiding high above the city? 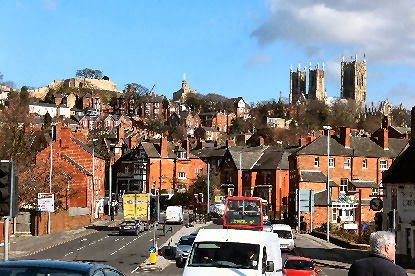 Stand in front of the enormous West Front,

contemplate the skill and dedication of those who more than nine hundred years ago began this building. Inside, far removed from the city’s hubbub, in the gloom at dusk, hear just the murmur of Evensong and gaze at the fine-arched ceiling

Retailers in a city must vie for trade: some utilise memorable shop names as at this butcher’s

and this dress shop.

and some use words

to attract attention to their window displays.

There is no charge for window browsing – and there were no great purchases. Someone drooled here

while someone else tried fruitlessly to acquire a non-spill teapot in appropriate size and shade. In these parts some folk use teapots as lampshades

More curiously, it would seem that some people are inclined to do odd things with their teabags

(read the notice mounted above all three toilets in the rented cottage).

Away from the city there are flat fields and large skies to the south,

but lumps and humps north and east on the Wolds.

(which runs 147 miles from the Humber Bridge to Oakham in Rutland).

Look to the west: as the sun lowers over the Trent Valley

Down south at Boston the Stump dominates the skies.

There’s a fine West Door and a mighty tower…

Was it a cow, a bull

– or just a picture in the market-place? Tempted by fruit

The Grand Sluice lock enables passage to the north onto the River Witham, south onto the tide and to the Wash.

Will Cleddau and Tentatrice pass this way in a few months’ time?  From this South Lincolnshire town Puritan pilgrims set sail,

seeking freedom in the New World.
Over to the coast, to Sutton-on-Sea. A boat at last..

Could another book or saucer have been squeezed into the Knick Knacks shop?

A starfish lay on the sand,

There, attached to the Lion Pillar, a stark memory is recalled.

And an hour later there was tea at the home of a then ten year old evacuee.  Her family’s house inundated by the sea, she and her small sister were dispatched to a London aunt, still in their Saturday party dresses, the sister minus her shoes.

For folk reunited by a Forces past, sightings of Lancaster memorabilia in the Dambusters Inn at Scampton,

of a Vulcan beside Waddington’s perimeter fence,

A perfect heart drawn in the sky

– its memory revives a long-held affection for Lincolnshire…