Take Sunday for example. A prompt start from above Willey Moor Lock

was successful for all of one minute – and then a high pitched bleeping sound sang out from the rear end of the boat.

Loss of water coolant diagnosed (the cause of the slightly blue tinged water in the bilge at the end of the previous day’s cruise). The coolant tank was soon topped up, the engine restarted and the journey resumed.

It was going well: three locks and three lift bridges further on 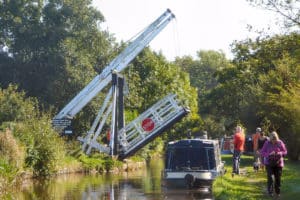 and Wrenbury had been reached.  It was a blue, blue morning, birdsong hung in the air, there had been a cockerel chorus, the village clock chimed eleven and the sound of Sunday football drifted across the fields.

After a pause for a Farm Shop and village store visit the cruise was resumed. But by now other boaters were about, all, it seemed, going the same way, towards Hurleston. Hence, being number five boat in the queue 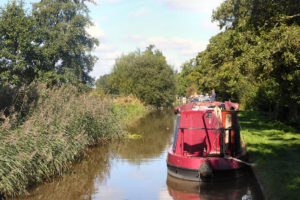 When you spend a long time holding a boat rope while looking across the canal at a rather striking black and white house, well, you might as well photograph it…

The afternoon slid on. Finally the top lock was free to access. The crowds of upcoming boaters had dwindled to nothing. No additional crew bustled around to help refill the empty lock, so after helping through so many up and down boats, now the lock was definitely on self service!

Down without further delay through the other two locks.

Swifts darted and danced above the water over a winding hole.

Down through the two Swanley locks Cleddau cruised, ready to moor up behind Tentatrice,  and more than ready at the end of a longer than expected day for mugs of tea and glasses of Pimm’s… ( See Tentatrice pics for September 18th).

Monday. There were just two miles left of the Llangollen Canal. The countryside here is quiet, the odd stylised chimney pot an unusual feature.

Fears of boat queues at the four Hurleston Locks were unnecessary,

although “a stand off” (another boater’s words) proved unexpected – and unsettling.

When an upcoming boat could not /would not leave the second lock up Cleddau was beckoned forward from the second lock down.  A short pound, a sharp wind, lack of sufficient water depth – and suddenly there was a spat between a boater’s crew and the volunteer lock keeper, accusations of unhelpfulness, not doing a proper job and rudeness  – and the Captain on Cleddau had nowhere to go

other than to practise pirouetting skills.

Once inside the lock there was a windlass and tiller handover. From inside the chamber

By mid-morning Cleddau and crew were off the Llangollen and cruising southwards on the Shropshire Union towards Nantwich. 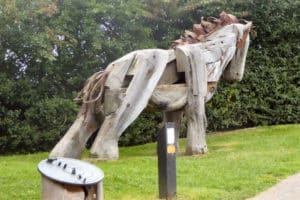 It’s a fairly long walk down Welsh Row to Nantwich town centre, but the walk and the town offer plenty of visual delight: 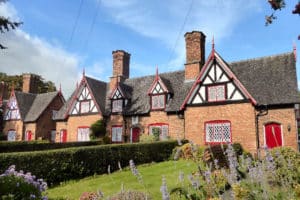 Nantwich was an important town in medieval times, important for its salt brine and as a military staging post. There was a great fire in 1583  after which Queen Elizabeth 1 ordered a nationwide collection to rebuild the town, donating £1,000 herself. This is the Queen’s Aid House 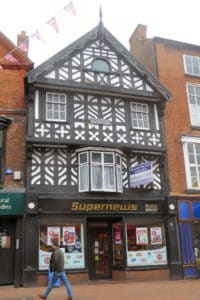 and from the bookshop / pavement cafe opposite this plaque can be made out:

Centrally positioned in the town is the beautiful St  Mary’s Church.

The red sandstone interior is spacious and light filled. There is much to admire about the old and the recent inside this well cared for building.

During previous  visits  the gloriously embroidered curtains (created to mark the Queen’s Silver Jubilee) were always seen drawn closed to totally screen the West Door (opened only for weddings and funerals, a steward had explained). Now though the new glazed doors and toilet facilities mean the West Door is in regular use and the curtains, still installed, are partly drawn aside.

After a few pleasant hours in Nantwich

the boat was headed south, towards Overwater Marina at Audlem. Along a straight stretch of towpath a high-vis jacket seemed stooped down, its owner’s face well into the hedge.  Sloe-picking…?

The figure stood up.

“Do you think I could ask you a favour please? Could you take me over there?” An arm gestured towards the opposite bank. “You see I’m checking the instruments on the gas pipeline – and it’s a long walk down there…”

Down there was a bridge a good half mile away – and hence another half mile back.

So, for the second time in her long career nb Cleddau became, like her namesakes, a ferry boat!

(The second time? Well, that was a plea for help from thirteen over 70s, all one time Boy Scouts, on a reunion walk along the Kennet and Avon, their route blocked by a missing bridge…)

What else is unexpected? Meeting other boat bloggers. Nb Oakapple  was spotted last week, the crew from Tumbleweed   (on holiday in the area) made themselves known at Grindley Brook, while comfortably moored up just above Hack Green locks on Monday was nb Erin Mae.

The Shropshire Union Canal Society over many years has tended numerous well positioned mooring sites on its canal and on the Llangollen Canal.  “I’m stopping and tying up at 5pm,” complained the Captain on Monday afternoon, unable to recall the delights of a nearby mooring site.  How timely then to pull ropes through mooring rings at Coolé Pilate Leisure Area

And then there came a shout. “Look, a balloon… it’s a hot air balloon!” 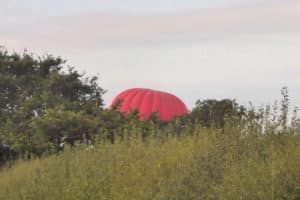 Indeed, being inflated just over the hedge was a very orange Virgin hot air balloon. The sound of the gas burner filling the envelope was perfectly audible, then up, up it rose, drifting south eastwards towards the Shropshire border…

Tuesday. From Coolé Pilate to the marina is a short hop, about a mile’s walk,

past a typical Shropshire Union milestone,

past a typical metal post protecting a bridge, horse towrope marks scored into it

– and past the largest flock of Canada geese yet seen.

Large too is the marina, a carefully landscaped boat park, a very pleasant place for some Cleddau R&R over the next few days.