Flat water through the flatlands

After the challenge of two foot high waves at sea and dense murk on the tidal Great Ouse, calm well-behaved water comes as somewhat of a relief.

(described here  as “a little-known hero”).  Boats and crews had begun the 72 mile Great Ouse cruise upstream to Bedford. Between Denver and Ely (16 miles) three tributaries dive off to the east, the Wissey , Brandon Creek (or Little Ouse)

and the River Lark.

There was time for a Lark diversion in 2014,  but not so this year.

The Great Ouse hereabouts is broad. High banks (and early morning mist) obscured distant views. The Captain, an enthusiast for correct flag protocol and a GOBA member, had decided to fly the burgee of the Great Ouse Boating Association. 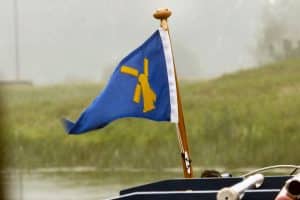 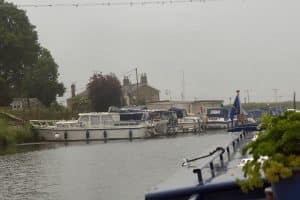 Onwards, past a one-time pumphouse.

It’s creche time on the river, swans and cygnets, 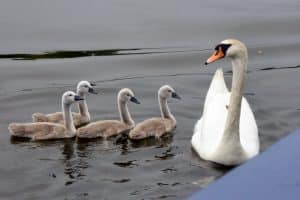 On past Littleport and one or two houses with interesting outlooks.

On the west bank are the gantries of the Ely – March fast railway line.

On a wide river there’s room to overtake – and a cruiser’s backwash spread wide across the water,

creating some undulation for a small group of canoeists.

Three hours on the distinctive towers of Ely Cathedral appeared.

There are two low bridges just before Ely; here the crews of three yachts with tall masts had obviously had to lower them.

Ely on a hot summer afternoon is a vibrant place: there are numerous visual delights as well as aural stimulus.

The waterside cafes and bars were busy, with outside dining terraces packed with customers. By the slipway people queued for ice cream and strolled along beside the river or took a seat in one of the parks. The bike that has been attached to the tearoom’s railings for some time is looking less and less usable! 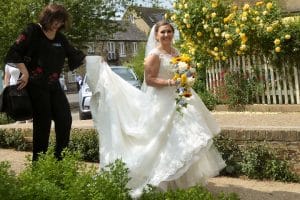 a 1970s wedding dress was on display. 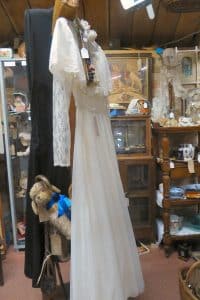 On Sunday afternoon the Chatteris Town Band occupied and performed from the Bandstand in Jubilee Gardens.

A steady stroll uphill leads to the ‘Ship of the Fens’, Ely Cathedral.

What a stunning building it is. 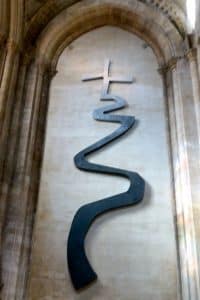 There are claims that this beautiful building is one of the seven medieval wonders of the world.

A very bright hoarding in the South Transept was a prop, seaside style,

deployed in the Stained Glass Museum for children to present themselves as medieval figures. 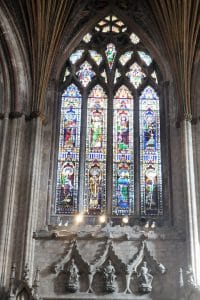 Inside at 4pm a congregation of about a hundred crowded into the chancel to hear a wonderful Choral Evensong. The soaring sounds of cathedral choir and magnificent organ made memories to cherish.

“Look up, look up in a city,” a friend once cajoled. What rewards there are for so doing in Ely.

The onward cruise from Ely to Earith and beyond would be lengthy. Why not start the day then on Monday with full water tanks, full larders – and full stomachs. Remember that breakfast four years ago in The Grand Central…?

On Monday morning the coffee machine was broken, there was no brown toast but the Presidential eggs were truly excellent! 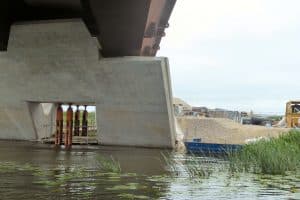 This is the Soham bypass under construction,

with a large workforce on site.

One good turn deserves another – a narrowboater operating on his own had got stuck in the reeds. Some reversing, some manoeuvring, some ropework, some steady yanking and he was freed.

“Remember that episode of ours on the Caldon Canal last year!” said the Captain.

Onwards to Pope’s Corner. Here the Ouse divides, to the left the River Cam to Cambridge,

to the right the Old West River to Earith, St Ives and Bedford.

Some boat names, once seen, are never forgotten…

but the usual navigational features of raised land, church towers, bridges and railway lines are entirely absent. In a lapse of concentration the rear deck crew found themselves – well, lost! (Captain: never lost, just temporarily uncertain of our position). Which page of the Imray Guide Book corresponded to miles and miles of narrow embanked waterway

where there are cattle,

but no indication of humankind…?

and one brute of a vessel passed in the opposite direction.

The Captain went into calculation mode: scale times distance – and remarkably, at near enough 3.30pm Hermitage Lock was reached. It’s a tidal lock and it takes one boat only at a time. From above the lock the arrow straight New Bedford River runs straight down to Denver and on to the sea.

Onwards, river to the right, flooded meadows to the left. Swans and birds had gathered on an island of grass.

When conditions are right this is fenland skating country. (Cold though it became in the late afternoon breeze there was no digging under the front deck to retrieve the ice skates!). Brownhills Staunch, the final lock of the day, was a bleak spot for lock operation, the wind clearly driving the tide up to the weir. 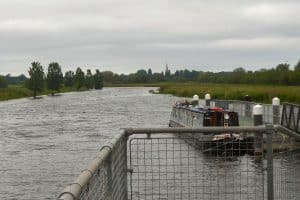 Quietly the river begins to change character; there are glimpses of villages, 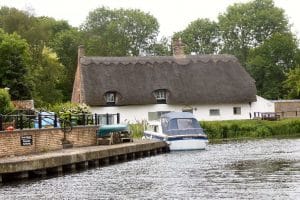 then of the small town of St Ives. Confusion reigned at St Ives Lock on Tuesday: two broken down boats, a small tender and much athletic leaping over barriers and rope tossing by the rescuers…

Then came the reward of that classic St Ives view – swans at the town moorings,

and the ancient chapel on the bridge. 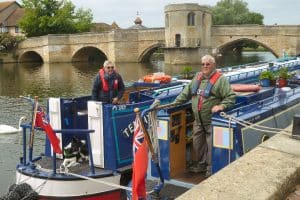 . It’s a bustling little town that deserves a proper visit.

Time though (or rather, shortage of) required a moving on. The river flows past the gorgeous Hemingford villages, 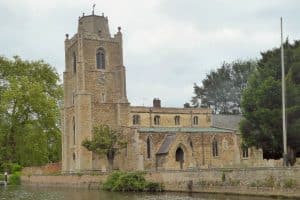 reaching the vast meadow at Houghton Mill. Trainee lock keepers were in attendance

– and the sight of the lock landing beyond stirred a particular family memory.

and the bridge at Huntingdon.

The roar of road traffic dominates the senses

Here was a planned overnight stop, less stressful than one in July 2010. Then the Godmanchester Friends had brought scones, jam, a Chinese supper – and a replacement centre-flex coupling to the boat. 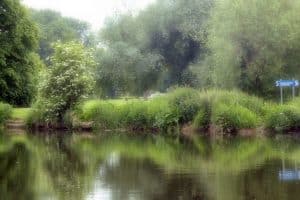 A Tuesday night walk from the park to the Godmanchester Friends’ residence for a delicious supper took far less time and involved far less frustration than arriving by car. After all, the Black Cat roundabout on the A1 requires serious concentration while crossing the East Coast main line at Buckden usually involves considerable patience…

By road Bedford and its July River Festival is less than an hour away, but a few more river days still lie ahead…

Distance and locks remaining to Bedford from Godmanchester: 24 miles, 10 locks