The Cleddau summer cruise resumed on Thursday: remarkably, there was no rain and there was little wind.

Volunteer crew, the Stafford Campanologists (their most recent cruise mentioned here) reported for duty. “It would help if you could wield a pole,”

the Captain announced to Tim, anticipating the labyrinthine exit ahead. From the furthermost corner of the Great Haywood Marina back to the Trent and Mersey Canal required several tight manoeuvres: a left, a right, another right, a left, a squeeze left out of the marina entrance,

a bit of shuffling about to bear left – and then Cleddau was on her way.

Confirmation of the route to be taken came very soon: at Great Haywood Junction the signpost pointed south for The Trent. 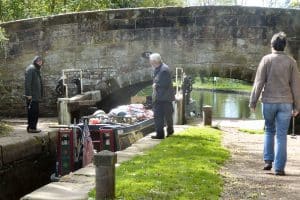 This stretch of the Trent and Mersey Canal has a great deal of charm. There are views of the Shugborough Estate,

glimpses of the baby River Trent babbling through the fields and woodland and the distant outline of the slopes of Cannock Chase.

Colwich Lock is often a bottleneck; there was time to recall that this was ‘the Physicist’s Lock’ (April 2008) – and to watch the cows cross the bridge as the boat dropped in the lock.

The Campanologists leapt off at Armitage, 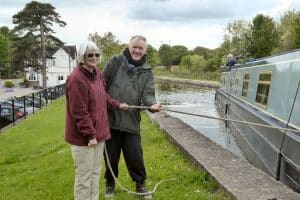 just after the Narrows.

It was great to have their help and company again –  and the cruise continued.  Armitage is famed for its toilets. The canal passes the Armitage Shanks factory

but only a tall photographer, a steady hand and a telephoto lens will get a good shot of the pallets of toilets these days… 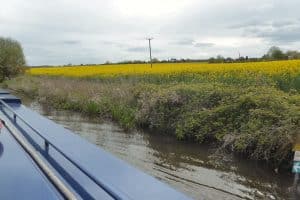 and to the left 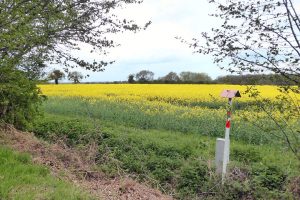 of the canal. Spring is so often characterised by yellow flowers – daffodils, dandelions, forsythia, tulips, primroses and here hedges of gorse.

Along the towpath now can be seen other blooms too, small white-headed flowers

while on the offside rhododendron buds are just becoming visible. Onward on Friday,  through an unbusy Fradley Junction.

5½ miles and 8 locks further on, it was blue flowers that attracted the eye.

Alrewas  is a pretty village

with a population of about three thousand people. The Trent and Mersey Canal weaves its way past well-tended gardens and a large churchyard

before dropping the canal down to a short section of the River Trent. Forget-me-nots are evident in plenty of gardens, beside walls, within borders, in all sorts of nooks and crannies. Years ago a godson’s bride presented wedding guests with packets of forget-me-not seeds. Boatwif forgets her not, when every May a few shy blue flowers appear in the garden borders. These dainty flowers are always a reminder of that glorious Greenwich wedding. Here though in Alrewas forget-me-nots could have a have a more sombre significance. Just two miles away is the National Memorial Arboretum, a 150 acre site where living trees and thought-provoking memorials support personal and respectful remembrance.

A walk along the riverside path towards Wychnor on Friday afternoon provided a view of a stubby church tower.

A stile, a field to cross and a fence to climb are no deterrent when there is a potentially atmospheric place to explore: a very large memorial at the churchyard gates records the loss in 1941 of an 18 year old in the sinking of HMS Barham .

In this small churchyard amongst the forget-me-nots

was another heartrending memorial.

are the clear words on a slab in the garden of remembrance – this person though had a longer life.

Back along the river path towards the boat

and a peek inside the church in Alrewas. What colour, what needlework, what involvement.

It was a Bank Holiday Saturday with continuous sunshine  – and the mile-long Trent River section from Alrewas to Wychnor was at its most beguiling.

On a busy day most boat traffic was heading west rather than east. With locks comfortably spaced there was time to observe a few boats whose names chimed with past memories or associations: 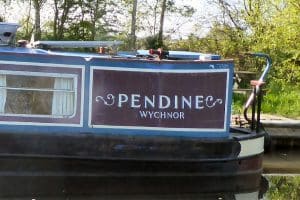 Often there are views of water-filled gravel pits, 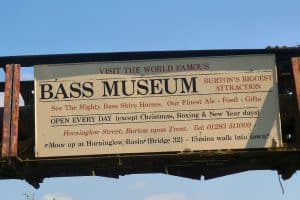 there are aqueducts over brooks, over mill streams

and over the River Dove.

Tied up just short of Willington crew members congratulated themselves on a mooring with an open view and no intrusive noise from road (the A38), rail (the Derby line) or pub (The Dragon).

Things don’t always go so well – there have been cries of frustration over missing maps (their location forgotten but, days later,  rediscovered) and too a missing radio (location still forgotten…)

May, perhaps, there be rather less forgetting in the ongoing cruise!