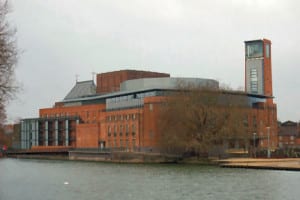 It was in the first Ice Age after we had come back from that the Captain said ” I suppose you’ll be wanting to go to upon for our anniversary again in January?”  We have done December / January trips regularly in the last few years – so it would have seemed churlish, indeed downright discourteous, to turn down a repeat opportunity!  So to internet checks – glorious hotel right opposite the Swan Theatre now reopened, room rates exorbitant, find cheaper place; new auditorium at the riverside building opened for tours but no performances until February; only show in production Matilda – A Musical taken from Roald Dahl’s children’s story, playing at the Courtyard, the ‘s workspace during the refurbishment programme.   Hesitate not – seize the moment, and book the tickets. Bookings proved difficult, no seats when wanted, or where wanted. Drastic decision, go for the 5th, regardless of one seat behind the other.  And then the show started its press previews…  Now “tickets are like gold dust” and “every seat is sold out” and long queues of would-be theatre-goers wistfully wait for return tickets.

We bowled along to in just 90 minutes. M1, M45, , streamed past. We arrived in “Shakespeare country” and waited for the Cousin from to join us for lunch. We ate, exchanged ice and walk stories (she having a particularly recent and hair-raising car over a precipice tale), then the Captain volunteered to install baggage and laptop in our room while Brum Cuz and I strolled ‘s streets.  All would be well provided we returned with a particular Landranger map.  Wrapped up against the cold we walked towards the shops, down towards the canal basin, round across the new lock bridge, viewed the Warwickshire Fire and Rescue Memorial, looked for the lost flower beds  – and then drifted across the lawns to Stratford’s iconic thirties theatre.  Closed in 2007 the buildings have undergone a huge transformation: now shiny new glass and steel structures crown the front; a tall angular observation tower soars up on the right; at ground level glass doors connect the familiar with the brand new. As if by magnetism we were drawn to the building – and into the colonnade. Not really aware of what there was to see we explored anyway, glimpsing the Ghosts in the Walls, fleeting images and texts projected onto the vertical surfaces. We sat in the Insult Chair, added to the digital sculpture – and tried out seats in the new auditorium.  A theatre tour was booked for the next morning…

No anniversary lie-in, rather a brisk walk to the theatre, the Captain and I the complete tour party. What greater thrill can there be for any twentieth century theatre enthusiast than to walk the very boards performed on by Judi Dench, Lawrence Olivier, Peggy Ashcroft…? For the boards of the old stage now form the floor of the vestibule outside the transformed auditorium.   We glanced at the seating layout (very similar to the Courtyard layout) and were directed onto the stage by our guide. We shared the space with a lighting crew, examined the backstage areas, toured the dressing rooms, glimpsed the Green Room, climbed up to the galleries – and then another thrill awaited in the Control Box: a £20,000 piece of computerised kit that records all lighting and sound effects for each production – and from which a production can be run when on tour in Tokyo or New York or elsewhere. Yet again a gasp at the wonders of technology. The provisional plan to do and Sharpness by boat this year firms up a cruise route to incorporate the River Avon, moorings and theatre visits.

A riverside walk followed, in wintry blasts and piercing rain. Ice covered the locks and stiller waters. Captain Navigator must check out the veracity of maps, hence we discovered that yes, there really is a footpath across the Stratford Racecourse – and yes, it is still open on race days. Under rails and across the course we headed – and in the distance on the far side against a hedge espied two railway carriages. Clearly they were in use, sturdy ramps and steps led up to the doors. Behold! One now a Cycle Hire operation, the other a cafe.  Up into the carriage we trudged and while we dripped and steamed hot soup and rolls were put in front of us. From GWR railway carriage to handy hikers’ and cyclists’ refreshment stop, another transformation!

Then to the theatre production. It is thrilling to scuttle along Waterside pre-performance, crowds all heading for The Rusty Shed, as the Courtyard locally is called. Inside large pictures of Matilda characters were clothes-pegged across the upper balcony rails. Blackboards invited audience members to comment on cast, story-line, production. The play started, the  troop of ten children demonstrating immense skills as singers and actors, dancers and gymnasts; Miss Honey was as sweet and pure as her name, Miss Trunchbull the totally despicable and intimidating head teacher.  I would see it again and again, no wonder the reviews rave about it! The audience is entertained, appalled, moved but totally engaged throughout.

If you go to you have to walk round the .  If you’re the Captain you have to demand the restoration of the second basin there, now under grass and trees. lock was where we made our very first encounter with words such as “paddle” and “windlass”.  Two Australians were the beneficiaries of his knowledge – and they were inquisitive enough to ask about toilet provision on boats… On Thursday a brisk walk to the railway station and a ten minute train ride found us in Wootton Wawen, about six miles up the . Hire and private boats were all iced in (but we did come across a very obvious external transformation). The towpath was muddy, (think thick squelchy mud of the We’re going on a Bear Hunt variety); in places signs were placed: CAUTION DEEP MUD. At Wilmcote a solitary fisherman had found some ice-free water but further on we watched and listened in amazement as a tug shoved two dumb barges through the ice. Just outside a cheering sight: a lady perched on the offside gunnel of her boat, polishing her roof brass. We compared notes on the Fen Waterways, the Caldon, The K and A – and wished the warmer weather a speedy return.

One last night in : we donned warm gear again suitable for a night walk, paid the charge and waited for the start of a Ghost Walk.  It turned out not to be a trundle through town alleyways but a shuffle through a dark long-haunted house, history and tall tales provided. It gave us appetite for a Cypriot supper –  but the Shakespearean ghosts gliding across the ‘s walls are more memorable.

Back home then on Friday, via Banbury and Stowe, avoiding motorway rainwater spray, but seeing still some ploughed high piles of snow.