Saturday started with a surprise: Cleddau’s boating companions out of Liverpool, Shaun and Colin from Silver Fox, materialised in Lancaster. Although still moored outside of the city they had walked in on a preliminary recce. Tales were swapped of respective Ribble Crossing exploits; here is the latest Foxes Afloat vlog, watch it to see them boating on an incoming tide on the River Douglas, on the wide waters of the Ribble Estuary and along the flooded ditch that is the Savick Brook…  Ribble Link anecdotes over, it was on to advice as to what to see and where to moor. The Captain, for his part, wanted to talk narrow boat solar panels…

The journey south eventually got under way:

swans and their ten cygnets.

A last glimpse of Lancaster Castle and the Priory Church

Silver Fox, a mile or so from the city boundary

Once beyond the city limits the canal threads through the lengthy tree-lined Deep Cutting. 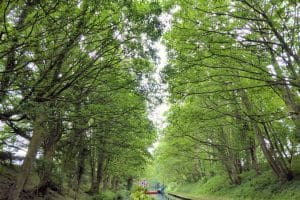 It does go on and on – approaching the tall Bridge 91 a small cruiser was seen moored up very near to the bridge. Close contact between steel boats and flimsier cruisers is not advised. A narrow boat came charging through the bridge hole from the opposite direction,

crashing into the offside undergrowth. There were heads amongst the trees, a barge pole wielded, a swapping of helmsman, an offer from Cleddau of a tow…

These incidents happen, resolutions are found – and the cruising continues.

The canal may not have been going downhill but when the weather goes downhill so too does the mood. Take, in heavy rain, a wide beam boat making the slowest ever turn,

a stop-start sort of continuation towards a bridge-hole, a backing off, some hand flapping and some shouted words about his new canopy…

A clearance in the weather an hour or so later allowed for a stroll down (and this actually was downhill) along the Glasson Branch,

passing the first three of those six mighty locks.

Evening visitors were the local swans, parents and a family of nine cygnets!

What is it about the Lancaster Canal’s waters that makes swans here such successful breeders?

Away from Galgate on Sunday morning the boats headed the 8 miles to Garstang: past the graceful bridge to the Glasson Branch

and under the ornamental Ellel Grange Bridge.

Somewhere there were more alpacas

and a gang of rag dolls on the roof of nb William Wallace.

To the east are the dark slopes of the Forest of Bowland.

Though familiar with the name, previously there had only ever been a vague idea as to its location….

On a returning route things look different, then suddenly they become familiar. Here was the extensive holiday park, all chalets and (im)mobile homes, verandas and pot plants, plastic herons,

oh, and that baby broad beam…

How glorious is the scenery to the east.

Then it’s Garstang, approached from the north this time. The signs proclaim it as the World’s First Fair Trade Town.

It was the Oxfam Group in Garstang that in 2000 started the Fair Trade town movement.

It’s a town of pretty cottages

Leaving Garstang on Monday morning (in sunshine!) there was a clear view of Greenhalgh Castle, a Royalist stronghold in the Civil War.

Weaving southwards there are more aqueducts, a salt dome beside the railway line,

and a cottage on Shakespeare Road.

Then beside the Flower Bowl, was the most unlikely mooring. There’s a pontoon beside a canal-side car park

– though a garden centre and a farm shop were expected. But inside this intriguing building

are recreational facilities aplenty. Crazy golf anyone, or darts, or ten pin bowling, or a film in the cinema or curling 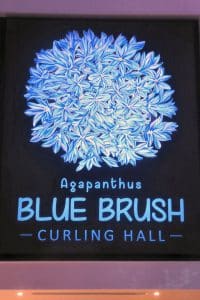 and later that evening (no camera) there were folk on the ice, sweeping and rolling the stones (just as seen on the tele from Winter Olympics in the past!)  For further details check out the Flower Bowl Entertainment Centre here.

It was quite some place,

and so tempting was the onsite café that a breakfast for four was enjoyed there on Tuesday morning.

and canal miles to be covered. The day descended into one of those 2W4C days (Too Wet for Camera days) as the boats continued southwards, finally tying up after the M55 bridge, at a pleasant spot

– delightful were it not for the incessant rain, a dark hedge and being within the BNFL /Westinghouse emergency zone…

Yellow flag irises on the towpath edging and occasional ox-eye daisies in the hedges had provided flashes of colour. In many places the towering cow parsley, weighted down by the rain, had collapsed, revealing untidy masses of thick and darkened stems.

It was more dry than wet on Wednesday morning (briefly) for the final few miles. There was a bridge parapet repair at one point,

a burned out boat at another.

and just after the UCLan Sports Arena is this:

With time up for Cleddau and Tentatrice on the Lancaster Canal the boats are back in the mooring basin above the Savick Brook staircase locks.

This lovely canal has provided plenty of stunning views and interesting places to visit. Lancaster certainly deserves more exploration as does Garstang on a Thursday market day. But it’s the far north of the canal that calls, where it hugs the coast and there are views across the vast sweep of Morecambe Bay. Just think, those railway stations of Kents Bank,

as the start and finish points of the cross Morecambe Bay guided walks. It’s estimated that in 55 years as Queen’s Guide Cedric Robinson has led over 500,000 fundraising walkers across the treacherous sands from Arnside to Kents Bank. Another chance to visit these parts would indeed be very welcome…

It’s to be an 0930 start on Thursday for the crossing back to the connected canal system.