Grand sightings on the Grand Union

Thursday 24th July, posted Friday from Braunston (after an overnight mooring in a rural but signal-free area!)
Bascote Locks to Napton:  8.6 miles, 17 locks
When raindrops from an oak tree, chosen for its shade properties, cause sleep disturbance the brain suspects an umbrella or a waterproof day may lie ahead. Just once today there was a dash below to collect waterproofs, though never were they worn; it was again more of a sunhat day.
A boat passed by at about 9 am. “You see, we’ve missed the first lock,” chided the Captain. (But locks are not like buses, they are still there, needing negotiation, whether as a single boat or as a pair!)  No matter – off the crew sallied at 9.15.

There are two single locks at Bascote and then a staircase pair. It was overcast, dampness hung in the air. “We’ll wait in the next lock for you,” called a boater – and thus it was that Cleddau spent the next few hours in the company of nb Puddle Duck, of Thorne, Yorkshire, en route to London and back. Sharing the vast Grand Union double lock chambers (a further 16)

with another boat does offer some economy of effort – and once it was established that Puddle Duck’slock operator insisted on using one gate rather than two a collaborative system evolved.
A top up of water for the water tank was on the Cleddau crew’s agenda – but water was not available at Bascote Top Lock; the tap was already in use at Bascote Wharf; the water point opposite the flower bedecked Blue Lias pub

was overlooked by the single-minded lock keepers  … water was not available, in fact, until above Calcutt Locks.
There have been the usual sightings – like the hard concrete edging of this canal,

the white wind up paddle pillars of the locks, the A frame shapes

over the hulls of the old workboats.

As for sightings with a degree of eye-appeal, well there was Manchuria, yesterday’s lock partners, now tied up awaiting the surveyor’s report. 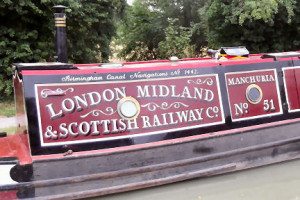 There was this extraordinary craft,

this name significant to some military personnel,

a Dutch barge and small tug alongside

and the cool open space of Napton Reservoirs.

Then there are the marinas, three seen in a very small area: Ventnor Farm is vast, simply vast.

Opposite is Calcutt Marina – and that’s got a large capacity too. The Grand Union slides on to Napton Junction: right opposite is Wigrams Turn Marina which again has a large number of moorings.
The sun was high, shade was absent. It was a left hand turn towards Braunston and not far before Bridge 108 (Nimrod Bridge) a shady tree beckoned. Camp was made: a towpath table, the green easy chairs – comfort for a late lunch and lazy afternoon.

Time passed: boats passed. Then came music floating in the air – and a string quartet on the bow of a Napton hire boat floated past.

How grand was that!
Tomorrow (Friday): through Braunston and its tunnel, seeking a network signal to post this blog along the way…