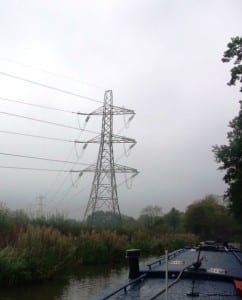 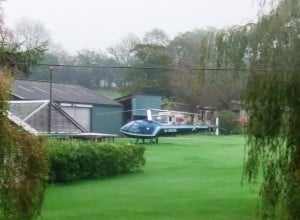 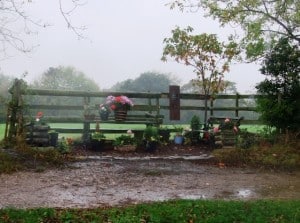 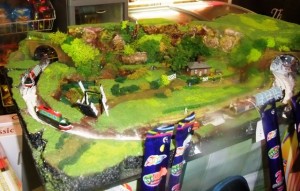 The final stretch of the Macclesfield Canal is now familiar. In good weather the hillsides of Lyme Park are green, tempting the walker to stride uphill and breathe the air in deeply. Today, however, it was as if the rise in land height was not there at all, instead it was deeply shrouded in drizzle and low cloud. Cleddau crew members were themselves shrouded in waterproofs and peaked caps, the Captain demonstrating his usual dexterity with tiller and umbrella. For once no low slung bridge maimed the precious umbrella, the purpose of which, the Captain insists, is not to keep the rain off the crew but the engine room dry…

The occasional well-waterproofed dog walker passed although two lady runners waited until we had passed before pushing their dog into the brown canal waters. Two lads fishing at the Poynton winding hole looked soaked but cheerful and agreed that they were indeed chilly. Meanwhile two small groups of runners, all of middle age and jogging in opposite directions begged “Give us a loan of your umbrella!”

The canal passes between fields, sometimes between wooded copses. Early on a horse rider crossed one of the bridges prompting a memory of Techno Son-in-Law’s snort that this is indeed North Cheshire horse-field country. Is the private helicopter used by a Manchester-based business person or celebrity footballer…? The pylons marching northwards are a sharp reminder that large populations are not that far away.

Then Cleddau cruised past Lyme View Marina, where for eighteen months her arrivals and departures could be sorely hindered by the cross winds. Smoke rose from the chimneys of a couple of boats, owners seeking comfort on such a dank morning. Then, moored up against the towpath was the tiniest little vessel ever seen in these parts, with no sign of skipper or crew. Through the dense tree-lined sections, on past the carefully tended little memorial garden, past the broad shallow waters and crowded public moorings at Poynton, finally through the bridge hole to home waters.

But there have been changes since the end of May. At the Trading Post, a small chandlery which serves diesel, ice creams, hot drinks and maps there is a new owner – and a diorama of a canal scene.  And across the canal at one time Marineville (shudder at the name) work has come on fast at what is now Victoria Pit Moorings. The near derelict pontoons were replaced last year. Now landscaping improves the site’s appearance, electricity meters have sprouted at every other pontoon and water taps are being installed. Worth coming back for!

Collected and driven to Macclesfield this afternoon the challenge is to reacquaint oneself with stairs, since there aren’t that many in a sixty foot narrow boat. “You’re sleeping in the loft, Granny!” (two floors up). “Want to watch a film on the big screen?” (stone steps down to the cellar). But (one floor up) this afternoon the Cheshire One gave a polished performance, reprising a dance routine performed as part of the British Legion 90th Anniversary last weekend. The music: In the navy…

Is Cleddau tied up now until next Spring? Hopefully not, but she is not being volunteered as Chief Icebreaker for the Macc or the High Peak Canal. There will be time to reflect over the next few weeks and months on next year’s plans…

Passengers and visitors on board (boarding at Gloucester, Milton Keynes, Branston): 17