Canal and River Trust was due to publish an update about the stoppage on Monday morning. When late on Saturday night a check on the website revealed that the closed area would reopen at 10am on SUNDAY morning it was time to formulate a new plan.

The boat needed to be turned round to face north again, (a slow mile cruise to the nearest turning point and back again), the water tank needed refilling, there was rubbish to dispose of, more coal was needed – and a substitute ash bin needed to be found. Once in winter mode the boat is gloriously cosy, the multi-fuel stove producing a warm wraparound sort of heat.  But a search under the front deck (a storage cave for out of use items) had failed to uncover the ash bin. Wherever it is (taken off the boat to provide more summer time front deck space?) a solution had to be found fast to the ‘where to put the ash’ problem…

Thus on Sunday morning the Captain set off, solo, to wind and service the boat.

Boatwif walked down Welsh Row again to Nantwich Town Centre (17 minutes from canal to shops) eventually to locate a suitable metal bucket. From 10 o’clock a peal of six bells rang out from St Mary’s Church. A people carrier delivered elderly worshippers to a churchyard access gate while young folk skipped and families scurried along Church Lane towards the South Door.

Bucket bought, boat servicing eventually completed (how busy it is on the Shropshire Union) Cleddau and crew set off,

where a boat was descending and one was waiting to go up the first lock on the Llangollen Canal.

was closely watched by a pair of walkers. The Captain hastened to explain a boat turning at its mid-point. “Yeah, done boats in the Greek Islands,” one of the walkers exclaimed, nodding sagely.

The Barbridge end of the Middlewich Arm always seems congested, boats moored on either side of the canal. 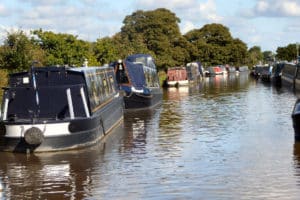 There are two large marinas (Venetian and Aqueduct) nearby – so would the combination of navigation closure and weekend traffic make for long lock queues…?

The delays could have been worse, but the towpath telegraph was at work. “Closed at 8am on Friday,” said one boater. “We had to change our route.”

It was a sunny day, early October yet many canal side picnic benches were in use. 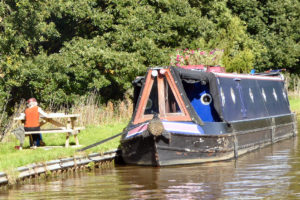 Two locks done, it was onward then, towards pretty Church Minshull.

Then there were signs of black coated foliage.

The pollution became more apparent, slicks of black oil still sitting on the surface of the water.

How had the Environment Agency contractors dealt with the situation?  Will sunlight break up the residue? Was a fish rescue mounted…?

Cleddau cruised on, out the other side of the incident area, and moored up with a glorious view down towards Winsford Top Flash…

Dallying for long at this end of Middlewich requires either great patience or earplugs (or both). Noise from road traffic is intrusive so boaters, move on southbound as swiftly as possible, past the salt mountains,

past the new build housing estate, on up through five locks for an escape to the countryside… Escape beyond the main West Coast train line and before Wheelock the canal becomes blissfully rural, where fields are worked and tractors are deployed!

well over a mile from the nearest settlement the last thing one would expect is to be called on by the police. It was about 9pm on Monday evening when bright flashlights were seen approaching along the towpath. The bearer of one bent down to boat level to gain attention. “Police here…” said an authoratitive voice. It seems an elderly man in blue jumper and with a walking stick had gone missing in nearby Sandbach and his wife feared he may have wandered to the canal… There was no information that we could offer that would help. What the outcome of the search was is unknown but it was a chastening moment.

Boaters arriving at Wheelock almost inevitably pause, whether to gather strength before facing Lock 65 and the beginning of Heartbreak Hill ahead of them, or after arriving downhill, water to quench their thirsts after their efforts! There’s a servicing area on the Wharf. But never before has this sign been spotted:

From Wheelock (Tuesday) the climb back towards Hardings Wood Junction (access  to the Macclesfield Canal) is unrelenting.

The sun was shining and while 14 locks and 5¼ miles were completed other people’s lives went on:  the traffic roar on the M6 was as insistent as ever; Canal and River Trust employees were at work, one strimming, one painting lock gate arms.

AA farmer tractored across one field to the next, there to start spreading muck upon the grass.

All the time the clear visibility meant the Mow Cop folly ahead was getting clearer and clearer.

Rode Heath is signaled by the pretty lock side cottages at the Thurlwood Locks.

14 locks up the shiny mooring rings beside Rode Heath Rise

were utilised for an overnight mooring. 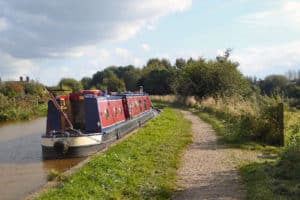 The meadow and woodland walk was once a salt works, abandoned in the 1930s, the site reclaimed for public benefit in the 1980s.

Just another 12 locks to the top, to a turn onto the Macc – that was the agenda for Wednesday. It was a day when the sun shone but the wind blew!  It was not a day for novices or nervous boaters: the Captain tacked and sailed the boat across the pounds.”Bit breezy,” muttered oncoming boaters, in classic understatement.  The water assumed a quilted surface

– and all the time Mow Cop grew that little bit closer…

Just after 1pm there came the welcome turn onto the Macclesfield Canal.

There were familiar sightings: boats moored before Red Bull Basin; 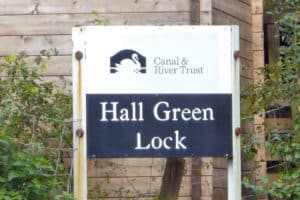 and the curious-looking footbridge beyond it, 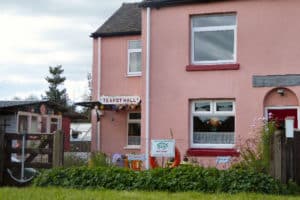 – and then the moorings beside Ramsdell Hall railings.

Just 19 miles, 12 locks and 2 swing bridges left before Cleddau reaches her winter mooring. May her remaining journey be trouble-free…!

Found on board: the complete set of boat keys (in a fleece jacket pocket); the emergency first aid kit

Missing, presumed stored in either a Cheshire or a Bedfordshire garage: 1 ash bin