Great Barford to Bedford
An early departure was agreed for Wednesday from Great Barford – there were three locks and seven miles to go to the Priory Marina in Bedford.
Late on Tuesday afternoon Boatwif glimpsed a flash of white (and some black) sidling past the cabin window.  Boat Dog from Tentatrice had decided to absent himself from the stern deck of his boat and to position himself comfortably on the grassy bank overlooking the river. 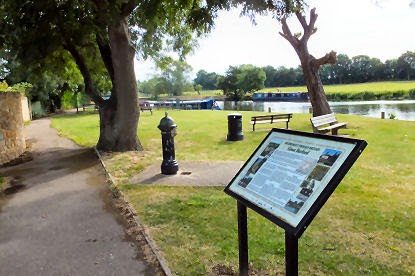 From here he could better supervise the crews and survey the scene…
Decades back there was another unauthorised dog departure at this same place. Senior Sis and Saltie had a terrier-like dog, Chip, but he leapt off, lead still attached, just as the boat was pulling away from the bank. Perhaps it is the gentle setting that makes certain types want to be on the land rather than on the river. Why, about five years ago the Captain and Boatwif drove to Great Barford’s The Anchor

to meet Three Men on a Boat. “Join us for dinner, do,” they had insisted.  Godmanchester Friend 2 was one of the Three Men and he’s a very persuasive chap. Several phone messages throughout the day preceded the dinner –  the little boat hired for an overnight jaunt from Huntingdon proved so unreliable it broke down nine times. Over the very late dinner that night the Three Men made a resolution: “We’re not taking it back,” they declared. “The boatyard can fetch it!” So they too jumped ship at Great Barford…
On Wednesday morning Cleddau again led the little convoy. “I’m going through the No Entry bridge hole,”

advised the Captain to the Tentatrice crew, “otherwise I’ll end up in the bushes.” This magnificent bridge was first built in the early 15th century and has had changes made over time – nonetheless a 60 foot long steel boat needs space to veer left into the navigation channel on the south side of the bridge. A voice on a PA system floated down to the river, audible for a good half mile. Once “Come on Year 7,” was heard. So Alban Academy, the Great Barford school for middle school age pupils, was having an outdoors morning then.
The river creeps undisturbed by roads for several miles. High trees and bushes provided shelter from the blustery winds.

As Cleddau rose in the lock two locals expressed delight at seeing the boats. “We come here often – these are the first boats we’ve seen all summer.”
After Willington Lock it’s not far to the log cabin at Danish Camp: here you can buy food and drink, hire a bike, hire a boat, bounce on a Viking themed castle,  enjoy lazy jazz on Bank Holiday Mondays – and discover something of the site’s history as a winter harbour for the Danes. Just look at those little boats:

three summers ago  there was a multi-generational trip in one of those, seeking dragonflies we were  (see paragraphs three and four here).
Further on secret log structures are nearly hidden amongst the trees. Yet again there’s a sobering reminder of the river’s force when in flood: see the height of some of the mooring poles.

Road noise begins to intrude as the river passes under the Southern Bypass (Oh look, this is called the Castle Mill Viaduct).

Cleddau may have gone through 138 locks so far on this trip but this next one still jangles the nerves. It is a vast chamber, deep and long. The noise from the weir is thunderous,

and the lock operation  perplexing. Two pillars stand midway along one side of the lock.

To empty the lock of water you use the windlass to wind what is called here “the outlet penstock”.

The water is discharged directly out onto the weir from half way along the chamber. Filling the lock is an odd experience here: as the water swirls in at the side of the boat and can cause some turbulence if the boat isn’t properly secured. Tentatrice was first through the lock.

From the lock side across the fields are the Cardington sheds,

famous for the airships created there. Airship related industry is still based in one of the vast hangers while in recent years the other has found new life as a film studio.
As Cleddau prepared to enter the enormous Castle Mill Lock the Artful Dodger from Danish Camp hove into view, crewed of course by Roy and Gail – and Ozzie,

their three year old European Owl. With a nudge and a shuffle the two boats squeezed into the lock, narrow Cleddau at the front, shorter broader Artful Dodger at the rear – and it was a smooth rise to the upper level.
Just the queue for Cardington Lock to go.  It’s a more normal size, within Priory Country Park.  It was lunch time. Workers from the nearby Business Park stopped to watch and to ask questions. Water surges fast past the guillotine gate,

the flow to the weir is strong and the wind was increasing in strength. This cruise was becoming a race against the wind: past the Barns Hotel, past Bedford Boat Club and a hard right into Priory Marina.

Where was the lady with the kind telephone voice who said she’d direct the boats to their visitor pontoons?
Arrived Priory Marina 1330 – finally moored up,

hooked up to electricity points and dues paid by 1600. Never did a mooring take longer…
Nor has a recovery to home ever taken longer.  The seven weeks of absentee driver had taken their toll on the car. A sheared coil spring, a tow truck and a garage bill was Thursday’s problem. Three cheers and heartfelt thanks to Exemplary Neighbour who twice drove his Jaguar to the marina to ferry the Captain and collect crew (and baggage). Not seen since May the Neighbour wryly announced:  “My birthday went off alright.”  It had been a Big Birthday, a seriously big birthday – and here he was providing emergency rescue of the boaters.
So the Cleddau crew have jumped ship for a few days. Though seven weeks were spent on the Macclesfield Canal to Bedford boat trip, it took under three hours on Friday to drive back. Techno Son-in-Law’s Big Birthday Event is this weekend and it involves kayaks, rafts and dragon boats…