Cleddau’s first trip into Stourport-on-Severn was back in 1994. Boat and crew had come up the river from the Avon (from Evesham, joining the Severn at Tewkesbury) to be met by an acquaintance of Senior Sis and Salty. There is little memory of that first excursion up the offset Stourport narrow staircase locks but some recall of the Clock Warehouse, of a raft of hire boats and a lengthy anecdote about badly behaved lads creating canal havoc on a hire boat…

There have been other passages through the basins from and onto the Severn since then but this trip allowed for some gentle perambulations around the site and for a little stroll along the Severn footpath.

On the tail of the broad barge locks the water level (Tuesday 25th) was distinctly “in the red”.

The river looked full, swollen even.

22 hours later the level was dropping – see now a hint of the yellow in the flood marker.

Not far downstream of the barge locks the River Stour feeds into the Severn.

On Tuesday a weir was barely visible under the water; 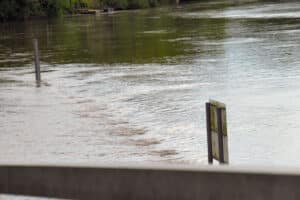 on Wednesday birds were just able to perch on the structure.

It was sobering to see flood guards in place at a row of cottages a dozen feet or so from the river bank.

The Staffs and Worcs Canal was opened to Stourport in 1771.  By 1812 (just 40 plus years later) five canal basins had been built. The canal linked the River Severn with the Trent and Mersey Canal and as a result, after Birmingham, Stourport became the busiest inland port in the Midlands.

Since a recent regeneration project those with time to spare may come across groups of words (taken from historical documents) inset into the dockside and into the stonework of a wall. What do they say – and mean? A prowl through a heritage timeline unlocks the mystery of the words engraved …

The famous canal engineer James Brindley and his local man Fenny-house Green surveyed the land and decided that Mr Acton’s fields in the parish of Mitton were the best place to build a series of canal basins.  Here businesses of the day would be able to load and unload a wide range of goods. Mr Acton’s fields, it seems, were requisitioned for the development of the basins and were measured up in chains.

Notices for modern visitors now provide a diagram of the basins’ layout.

There is a pair of broad locks (used nowadays by the broader beamed cruisers) and the four staircase locks for narrow boats.

(Catch a breeze when trying to line up from one staircase pair to the other – and it can involve some tricky manoeuvres!)

marina moorings for narrow boats, a hire boat base, a dry dock for repairs,

a boat building business and a chandlery. It’s a breezy place where winding (turning) a boat on the open expanse of the upper basin can be challenging.

Boats and locks and waterside views are a magnet for many. Dog walkers and boataholics, liveaboards and locals share the space, often with a nod and a comment.

In finer weather (that is, not raining at all) Cleddau left Stourport on Thursday to head back along the canal. Birdsong is very apparent, especially late morning, when as if at a breaktime after morning lessons, birds of all species give vent to full-throated chatter and song. At this time of year new life is evident:

elsewhere a pair of swans was trying to corral their fast-swimming cygnets.

Some creatures are habitually solitary –

did this peahen have a partner?

Beady-eyed herons will patrol a home stretch of water on foot and on the wing, in search of food. This confident one near the Bratch allowed towpath humans to walk right behind it! Another solitary sighting was of a small terrapin sliding off a stone back into canal water…

On the return route there was time to observe again, more closely, features which had been passed a few days previously.  What purpose had this lovely building on the outskirts of Stourport served?

where once a lock had connected the canal with the River Stour.

Here was the Falling Sands Viaduct 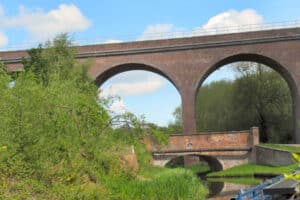 There had been glimpses of a waterworks somewhere on the outbound route – here it was at Hinksford, a pumping station.

There’s an even more impressive waterworks at Bratch.

Look over the wall from the top lock at the Bratch and glimpse the gothic turrets in the trees in the valley below. A stroll down the towpath and across the bridge gained additional views. Bold Victorian municipal architecture.

Just a few other sights that caught the eye: Kinver is an attractive village with one main street below the ridge.

At the other end of the street is this sign, a reminder that “city” in US speak does not have the same connotations as in the UK… 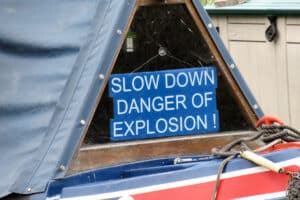 and not a half mile further is the “Devil’s Den”.

Is it this, a hole now sealed up in the rockface?

For the record moorings overnight after Stourport were at: the Boundary Stone below Whittington Lock (Thursday),

above Greensforge Lock (Friday), opposite the Beacon Cricket Club above the Bratch locks 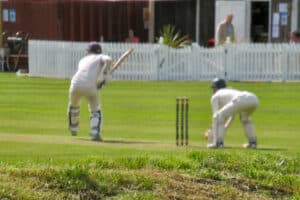 below Wightwick Lock (Sunday) in place for a (Monday) visit to Wightwick Manor.

Finally some boats: why this approaching boat was a similar colour scheme to Cleddau –

and look, a family name…

The Loveboat seems to have a huge amount of love,

for the Black Country, for Lancashire and for Yorkshire…

(and on a warm Saturday evening why not have the first Pimm’s of the year!)