Keeping ahead of the March Navy

Post festival on Monday there was much to be done – the packing away of a gazebo which despite its missing connectors and roof poles had provided both shade from the beating sun and shelter from beating rain.

Outdoor chairs, picnic blanket, surplus cool boxes, the gazebo and car were returned home – and Exemplary Neighbour then returned the Cleddau and Tentatrice Captains to the boats, by Jaguar!

Rumour was rife – “There’s a queue of fifteen boats down at Cardington Lock, some have turned back…” But since time and tide will wait for no man (nor two boats) the downstream trip had to be started.

or at Willington, where a little family was fishing from the portage landing and the four year old girl, desperate for a loo, was absolutely not phased by the Airhead composting version on a boat.

Through Great Barford Bridge – tension- would there be space to moor at this popular spot? 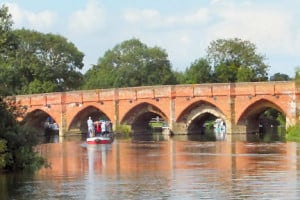 There was, and in a very practical move the Tentatrice crew erected their gazebo to dry it off and provide cover for a bankside supper.

“An early start tomorrow? Keep ahead of all the other boats?” went the discussion. Such was the thinking, but even an 0850 departure was too late. Ahead were the Isleham Three from the River Lark and the March Navy (ten cruisers from the Middle Levels Watermen’s Club). The river is often wide, there is plenty of space for sharing – but locks can become choke points. A mini-holdup at number two lock (Roxton) became longer at number three (Eaton Socon) where a broken down boat needed retrieval from the lock.

Fine tuning of the “Stop at St Neots for water and shopping” plan was prompted by spotting  the Isleham Three on the left beside the park and the March Navy occupying the town pontoon and water point on the right. 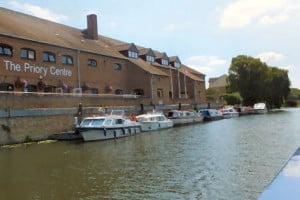 Cleddau and Tentatrice cruised past, with a mile to go (past pretty properties and gardens)

to Paper Mill Lock. And here it was that the March Navy arrived,

eager to offer both advice and criticism. (Captain’s note: lock width 4 metre = 13ft 3in, narrow boat width 6ft 10 in x 2 = 13ft 8in could not be understood by some!) Above on the lock side the Watermen’s unwise voices plotted (unsuccessfully) to overtake the narrow boats …

A shady mooring just south of Brampton was achieved for Tuesday night.

Locks came thick and fast on Wednesday morning: there was Brampton (behind the mill); Godmanchester (beside Port Holme Meadow);    Houghton (again beside a vast water meadow and near to Houghton Mill); then Hemingford; finally St Ives.

“Oops,” thought Boatwif when cruising out of Brampton. “Email out of action, better alert Godmanchester Friends that the boats will have passed through.” An answer phone message was left – and another lock came. Mums and toddlers waved from Huntingdon Park, Hartford Church 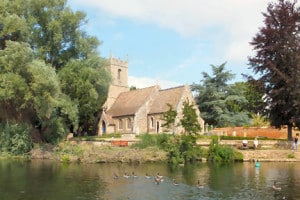 (the scene of a teen’s drowning just 24 hours later) looked as lovely as ever. This river stretch is picturesque, quirky, 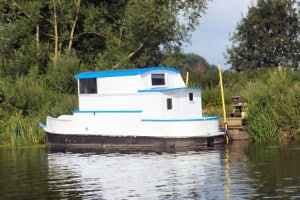 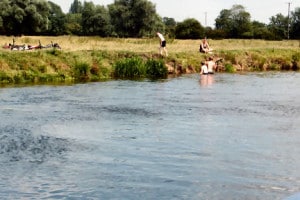 and a day boat in steam at Hemingford Lock.

“Where do you moor your boat?” Boatwif asked, barely able to prevent her hands from stroking the smooth, glowing wood.

“On a trailer, in my garage,” was the reply. And as it steamed under the lock guillotine it emitted the most glorious of steam horn sounds!

(Ever wondered what was in those Environment Agency lock cabinets?

This is the machinery minus its casing at Hemingford Lock).

Hemingford Grey is a glorious village; 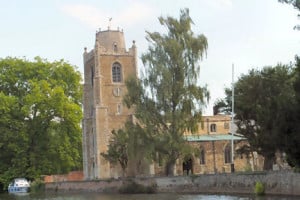 it’s the one-time home of Lucy M. Boston, ( http://en.wikipedia.org/wiki/Lucy_M._Boston ) author of the Green Knowe children’s books, her stories based on characters who might have lived at Hemingford Manor.

There was a brief pit stop at St Ives, and then onward to secure an overnight  mooring at the Pike and Eel.

“And have you now in your slow boat changed hemispheres?” joked  Godmanchester Friend  2 later that evening. He  had tracked the voyage and arrived by car. It was an apposite question as less than half a mile away is a post proclaiming the Greenwich Meridian line. 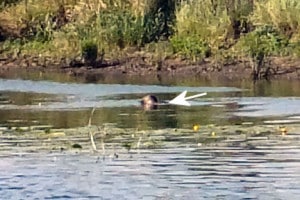 one supervising from the nest, the other from the water.  From the bow on the Old West River all that could be heard was the chomping of the cows on their cud.

Then there came an interruption to the thoughts. As Boatwif grazed on her lunch on the bow deck there was a voice from a passing cruiser. The laundry espied,

the voice announced: “Right, I’ll bring my ironing round later…!”

Green – it’s high summer of course for banks and trees, but green algae blooms fast. In parts the Old West River was a sea of bright green sludge,

Pope’s Corner at last – take a left for Ely. 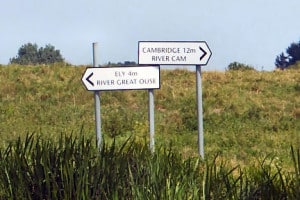 The red flash in the distance was a boat under sail, how glorious was that!

There’s a noticeable embankment on the Great Ouse: if you’re looking at the right moment you might spot an over-sized chair and some sailing signs. 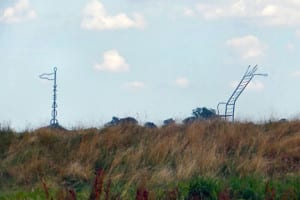 Swivel the eyes to the opposite bank and there rising above the city is the Ship of the Fens, stately Ely Cathedral. 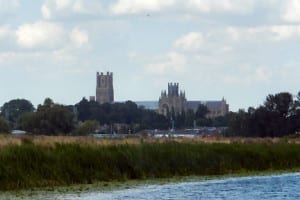 It’s good to be back in Ely, hot though it is…

From here there’ll be a hop to Denver Sluice, a passage through on the high tide and an onward trip to King’s Lynn – and then – Tuesday possibly, a cruise across the Wash to Boston.